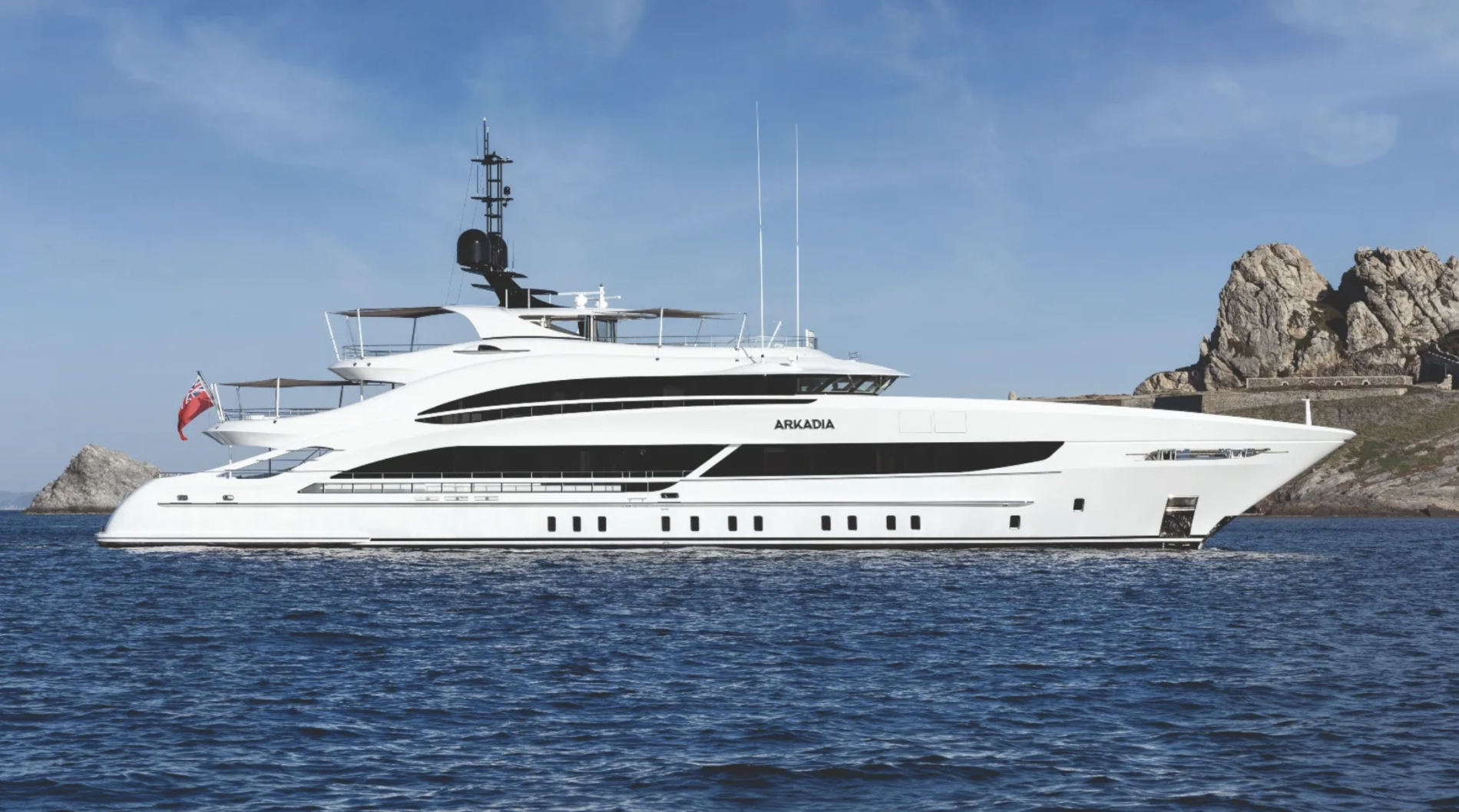 The second hull of Heesen’s 50-metre Steel series has been tweaked for an active family. Sam Fortescue steps on board in the South of France and marvels at a plethora of playthings...

Humankind has been longing to return to the golden age of pastoral innocence since first climbing down from the trees. The Greeks identified this simple happiness with the wild Arcadia region of the Peloponnese, where it was all about shady arbours, quietly grazing sheep and fearless, bathing maidens. Now, the striking 50-metre Arkadia has become such an oasis for one fortunate American owner.

No sheep, babbling brooks or dryads here, though. Arkadia is a different vision of a perfect world where family counts for everything and there is an activity for every hour of the day. “She’s a very stylish boat,” says Thom Conboy of Heesen USA. “It’s a tough-looking design if you look at it from the dock or at sea – a really masculine kind of boat.”

As with most Heesens, this story is one that started long before there was a buyer for the boat. Equipment was ordered back in 2017 and the Dutch yard got to work building the 49.9-metre hull on spec. It was completed in late 2019, whereupon it caught the buyer’s eye. Then Covid-19 hit, and she spent some time lying alongside at the yard in Oss. “Things got strange for two or three months,” Conboy says. “The dialogue kept going, but only seriously resumed in June when things started to open up in the States.” There was talk of a larger yacht for a while. “Then it evolved back into the 50 and we sold it in the fall of 2020.”

The owner’s thinking was straightforward. “We wanted to keep it under 500GT and have not too large a crew to keep things on the simpler side,” he says. “And we wanted north European pedigree, especially coming up from an Italian build.”

But Arkadia’s story goes back further still. She is the second in Heesen’s 50 Steel series that was inspired by a custom one-off build called Ann G. Launched in 2015, she won a series of gongs, including a nomination at the World Superyacht Awards. Much of her DNA has been passed down to Arkadia.

“The general arrangement of Ann G was heavily influenced by the owner, who wanted a big entrance and less steep stairs,” says exterior designer Clifford Denn. “He wanted it to be more grandiose and spacious.” The original idea had been to put the tenders on the bathing platform, but the owner called for a rethink. “The tenders were moved from the aft deck to the foredeck to free up space for the beach club, so we had to raise the wheelhouse by 300 millimetres,” Denn adds. “We raised the bulwarks too, but raked down the bow so the captain still gets a good view.”

With the boat measuring nine metres on the beam and 50 metres in length, Denn had to use some sleight of hand to keep her below 500GT. The way the bow drops off, with a hefty wave breaker protecting the tenders, shaves all-important volume off the interior, as well as favouring sight lines forward.

There are no volume concerns with the sundeck above, however, whose open design has allowed Denn to maximise the space without contributing to the gross tonnage. And the key to that lies in the workmanlike reverse angle of the trawler windows on the bridge below.

“With pitched or curved windows, it becomes a greenhouse,” says skipper Jamie Farnborough. “And you’ve got the problem of reflections.”

“[There’s] none of that with trawler windows,” Denn says. “Rain doesn’t get to them either, and you get the extra length overhead.” He has put those extra metres on the sundeck to good use. A hardtop amidships offers shelter for a well-specced gym, complete with rowing machines, weights and bikes. Fore and aft the deck can be shaded with awnings and there is a bar, sunpads, spa pool and a lounging area. A removable carbon davit serves to lower the gym equipment down a deck when you need the extra space for a party. “This deck is awesome – and very well used,” says Farnborough. “Having so much space is quite unique on this size of boat.”

Here Arkadia makes a departure from the previous boat in the line with the addition of an opening glass panel that encloses the forward end of the hardtop. It provides wind protection without adding to the gross tonnage. “The glass door was the captain’s idea,” Farnborough says. “It stops the wind from blowing through. The owner really wanted a gym on board and this was the only place we could really put it.”

Tenders and toys are the other things the owner wanted – and heaps of them. “We were looking for a go-anywhere steel-hull yacht that could sleep up to 12, with lots of storage for toys,” the owner explains, “including a beach-lander dinghy, Mastercraft wakesurf boat and a jet ski that we use for deep-water kiting sessions, among other activities. Also, [there is] an assortment of canoes, SUPs, bikes, kites and diving gear, not to mention a 15-metre water slide and a large inflatable beach and pool for the kids.”

Even as we tour the boat, the captain takes a couple of calls relating to a new Mastercraft NXT20 wakesurfing boat and a custom 5.6-metre Ribeye that are on the way. Farnborough determined after a Tetris-like calculation that there is just enough space in the tender well if the Solas launch is jettisoned (it isn’t necessary on a private boat) and the existing Ribeye is replaced with the custom boat. The latter has been designed to be a few centimetres narrower, giving a slim 100-millimetre clearance on each side. It also packs diesel inboards instead of outboards, to reduce its storage height. By a stroke of good fortune, the existing tender crane can handle the new boats without any modifications, thanks to its two-tonne rating.

“I’d still like to get rid of these beams down the side of the tender well,” says Farnborough, tapping one with the air of a builder sizing up a job. “Are they structural?” he asks the designer with a twinkle in his eye.

Denn responds with a poker face. “I don’t think so.” Then, looking at me, adds: “A happy owner is a happy design.”

Coming to the project after its completion, the incoming owner could only make limited changes to the design. Inevitably, most of them were cosmetic and related to the interior. The single exception came in the saloon on the bridge deck, which has been given a second identity as an extra guest cabin. A sofa that serves as a bed was put in and the dayhead was extended further into the room to include a shower. It allows up to 13 guests to stay on board. “We’re a very busy boat,” the captain says.

Other than a few tweaks by Bannenberg & Rowell, the interior is wholly designed by Reymond Langton. And, being built on spec, there’s a careful balance to the design. “The brief from Heesen was simple,” says studio co-founder Pascale Reymond. “They asked us to create a contemporary and comfortable environment that was at the same time a highly elegant space adaptable to a big range of clients.”

Accommodation is spread across a full-beam master cabin at the forward end of the main deck, and four double cabins on the lower deck, all with true island beds. Some of the doubles can also be converted into twins by lifting out the night stand and sliding the beds along a hidden track.

Materials are in muted natural colours: light Tanganyika wood contrasts with dark American walnut and Carbalho; Crema Marfil marble with Brown Armani; bronze and velvet wool carpets. There’s also plenty of veneer, natural leather and a durable patterned faux leather made by Majilite in wall and ceiling panels. And as you’d expect from the Dutch yard, the finish is outstanding.

“All these materials are really interesting even if not too exotic; we think it is not always necessary to use extravagant finishes to obtain an interesting and elegant space,” Reymond says. “We mixed materials in contrasting colours and patterns, combined together following linear shapes to create an interesting and featured environment that was at the same time a canvas for the future owner to add their touch and preferences.”

Soft indirect LED lighting strips are hidden all over the boat to add atmosphere: under beds; in the sky lounge bar; and in the bronze frame of the decorative panel by the owner’s office. Reymond describes this technique as key, “to give a cosy and relaxing effect and possible different scenarios for any occasion”.

The main saloon is the ultimate exponent of these design elements. Big windows and uncluttered furniture layout make it a bright, calming space with glorious views out to either side. Glass bulwarks aligned with the sliding glass doors to the side of the Fendi dining table make this a particularly luminous spot. The feel of the yacht is one of clean lines and volume. Entertaining spaces are restrained and comfortable. It is not about projecting power or showcasing exotic or unlikely materials. This is a boat – belonging to a man, for sure – but designed for the use of a family.

And nowhere is this clearer than when you visit the beach club. Currently undergoing the endless cycle of maintenance, this huge space was absolutely filled – choked – with toys that ranged from racks of kite surf wings to dive gear, wakeboards, jet skis and more. Barely a square inch of floor space was free. It takes an effort of imagination to picture the transom door swinging open and the swimming platform dotted with loungers, the deep blue of the glass bar sparkling in the reflected light from the water and people spilling out of the sauna and heading for the sea. “We also put a huge inflatable platform aft,” the captain says.

But whether your programme is diving, dining or seeing the world, Heesen’s Steel 50 offers a really capable platform. Twin MTU 8V 4000 engines give her a respectable top speed of 16 knots, but more interesting is the 3,800-nautical-mile range at 14-knot cruising speed. Twin Naiad fin stabilisers keep her comfortable, and she has the fridge and water capacity to go for weeks away from port. “She goes to sea very well,” says Farnborough, who has already sailed her with 60-knot winds across the deck. “We can leave the boat set up as is to cross oceans.”

And cross oceans she will with this owner, who has cooked up some ambitious plans with his captain. “I see it as part of my job to get the owner excited about the boat and thinking about new destinations,” Farnborough says. And as he reels off some of the draft itinerary, it is amply clear that he is as keen as anyone to get off the beaten track... off in search of his own Arcadian cruising grounds.