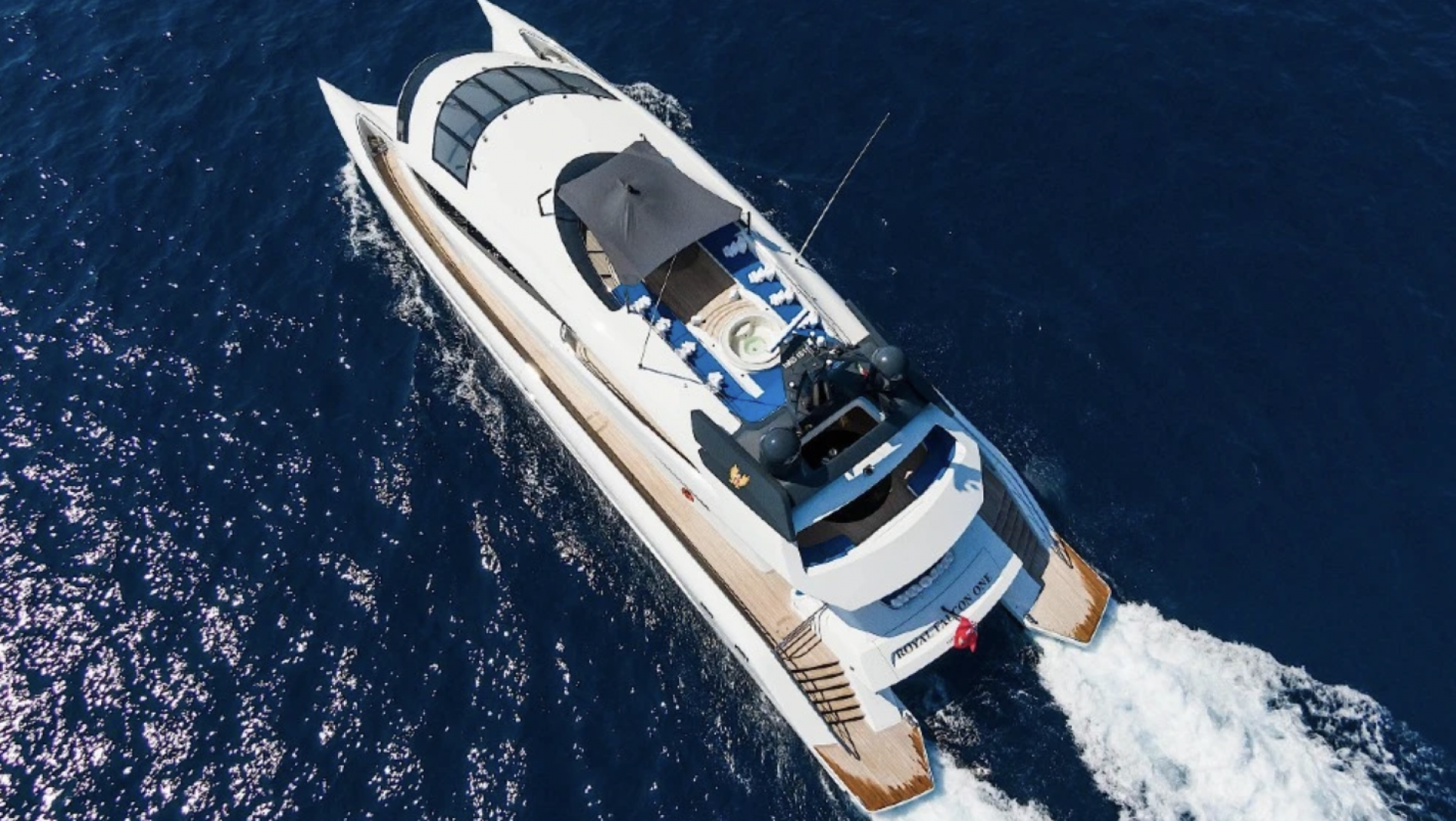 BOAT OF THE WEEK: THIS 135-FOOT PORSCHE-DESIGNED CATAMARAN IS A SPEEDY SPACESHIP FOR THE SEA.

"Royal Falcon One" may look like something out of science fiction, but the twin-hull cat can perform at high speeds over long distances.

The assignment to designers at Studio Porsche Design was simple: Create a spaceship for the water. And make it go fast. The result was Royal Falcon One, this futuristic, mind-warping 135-foot, all-aluminum power catamaran with a super-luxury Star Trek interior and a searing 43-mph top speed. Commissioned by a Swedish tech entrepreneur, the twin-hulled superyacht was built at Sweden’s famed Kockums shipyard, best-known for its stealthy navy submarines and sleek corvette warships.

Taking 10 long years to construct—the yacht was finally delivered in 2019—its maiden voyage was a 4,000-mile wild ride from the Baltic to the Mediterranean that included long spells battling 15-foot-high frothy North Sea rollers.

“She really proved herself on that maiden voyage. Especially when we had to outrun a big storm while crossing the Bay of Biscay. That’s when 10,000 horsepower makes the difference,” Roger Leitner, Royal Falcon One‘s project manager and executive vice president of Royal Falcon Fleet, told Robb Report.

The owner’s interest in power catamarans came during a visit to Australia and a ride on a high-speed cat designed by Sydney-based naval architects and fast-cat specialists Incat Crowther. “He really liked the stability you get from two hulls, and the tremendous interior space. Wanting his next boat to be something very different than a traditional monohull superyacht, he asked Studio F.A. Porsche to come up with a groundbreaking design,” explains Leitner.

Those slender, twin hulls are joined by an almost egg-like superstructure with a wave-piercing lower section and acres of curved, super-strong glass.

“The owner had a vision to create something that demonstrated the power of a sports car—a Porsche—with a touch of spaceship for the sea," says Leitner. “A yacht that would really make a statement and break the mold of what a superyacht should look like.” It would be the first superyacht design from the Austrian Studio F.A. Porsche, the independent design arm of the famous car maker.

Being a “Porsche” it needed to go fast. Which is why twin German-made MTU 16V 4000 diesels, each packing 4,615-horsepower, were specified, along with Swedish-made Marine Jet Power (MJP) waterjets instead of conventional props.

“The performance is hugely impressive,” says Martin Ven Den Berg, Royal Falcon One’s captain since 2019. “Yet it all feels surprisingly undramatic; when you push forward the throttles she just surges ahead like a jet on take off. Her 37-knot top speed is fast, but it feels really fast when you are overtaking other boats.” At her 17-mph cruising speed the yacht can go over 1,200 nautical miles on a tank; or around 2,250 miles when it is throttled back to 11 mph.

Step aboard and the yacht’s huge 41-foot beam helps create large interior volumes. From the expansive aft deck with its full-width, curved-glass doors, you enter a vast entertaining area. The central dining table has places for 10, and there is also seating on the hip bar, or on the mile-long leather sofa. From here a long, glass-walled corridor-illuminated to give the feeling of being beamed-up by Scotty on a Star Trek transporter—leads into the so-called Panoramic Lounge. Designed for entertaining, the lounge is all wraparound sofas, deep windows and an elegant cocktail bar.

Steps lead to the upper deck and one of the yacht’s showcase features, the owner’s suite. As well as copious amounts of space, there’s a Porsche Design circular bathroom with its brushed-metal finishes and 50 Shades of Graycolor scheme. Perhaps the piece de resistance here is the secluded owner’s terrace off the master bedroom. It features an intimate, circular dining table, positioned below a large skylight, for star-gazing during fine dining.

The yacht has five ensuite cabins for 10 guests, and accommodation in those spacious twin hulls for a crew of up to 10.

Part of the original plan for Royal Falcon One was for it to be part of a super-exclusive, invitation-only club, called Royal Falcon Club, where members would get timeshare-style use of the yacht. Club membership would also include use of a castle in Parma, Italy, a sporting ranch in North Carolina, and a vineyard in Tuscany.

“Unfortunately, we finalized plans for the club in February 2020, just as the pandemic started to lock things down. Everything was put on hold,” says Leitner

As the name Royal Falcon One suggests, the intention was to build a fleet of power catamarans to be operated by the club.

A second, identical Royal Falcon yacht was built alongside the original, though only the aluminum hull and superstructure were completed. It’s currently in a yard in Vietnam where the owner’s company is based.