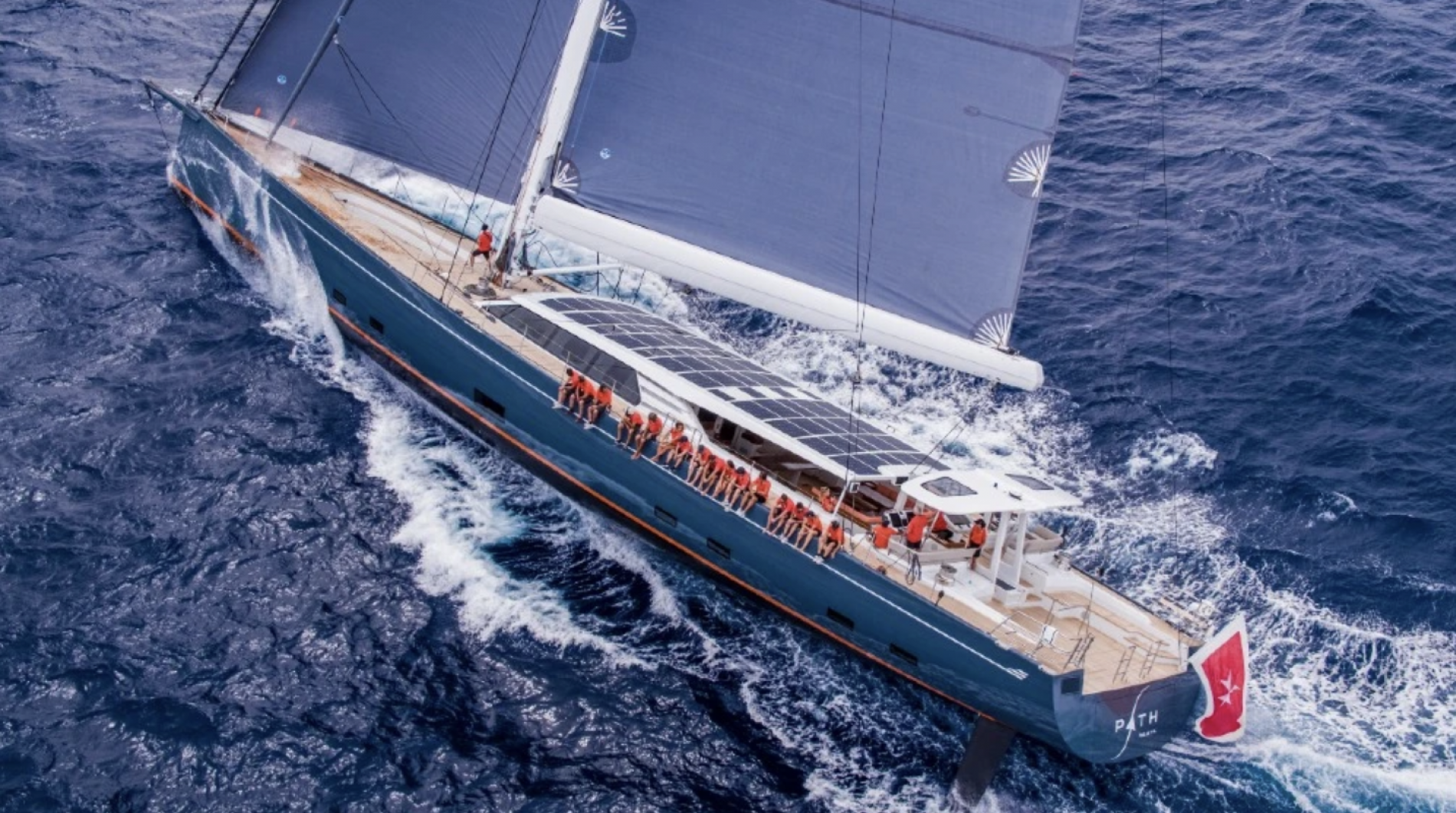 BOAT OF THE WEEK: THIS GLOBETROTTING SAILING YACHT GETS POWER FROM 646 SQUARE FEET OF SOLAR PANELS.

The vessel has already put 6,000 miles under its hull, cruising around the world with the owners, their children and grandchildren.

The owner of Baltic’s new 146, Path, had his sights set on global adventure, taking his children and grandkids along for the ride. He wanted a sustainable, comfortable family home that could travel the world. His original plans called for “exceptional living space above and below decks”—not something sailing yachts, often with narrow beams and massive rigs, are known for. That becomes even more challenging when these boats have to perform as powerful, ocean-going vessels.

“He bought the second hull in our Baltic 112 range six years ago, with the concept of sailing around the world with his family,” Henry Hawkins, Baltic CEO, told Robb Report. “With that, he filled a little black book with all of his ideas and feedback. He liked the way his previous boat sailed, which was designed by Rolf Vrolijk, so when he was ready to build again he pulled Rolf in to work on Path.”

With 35 years of developing racing yachts for the America’s Cup and the TP 52 series, German-based judel/vrolijk & co took on the naval architecture, exterior styling and interior design. For its part, Baltic set about planning the build of the third-largest yacht by volume in its 48-year history.

Part of that process involved building full-size mock-ups of the deck salon, covered cockpit and guest accommodations to replicate the boat heeling at 20-degree angles. This helped to get the right ergonomics and safety features, such as handholds and footrests, while guaranteeing plenty of space.

“There were 24 of us aboard for the recent sailing trials and we barely filled the covered cockpit area when we assembled,” said Hawkins.

The twin steering positions in the cockpit have their own protective Biminis. Just forward are positioned 646 square feet of solar panels capable of generating up to 8kW to boost the yacht’s lithium-ion battery bank. The 146-foot carbon composite boat is also Baltic’s first IMO Tier-III compliant yacht, while the owner’s choice of tender extends to an all-electric Torqeedo RIB. A second tender is stowed in a foredeck recess which converts to a swimming pool when at anchor.

Sailing yachts are not known for carrying large collections of water toys, but two Reverso Match sailing dinghies (which disassemble into four parts for easy stowage) are included, along with a lightweight titanium swing anchor arm and a submarine anchor system, hinting at the owner’s intention to explore below the water’s surface, too.

Path is designed to maintain average speeds under sail of between 11 and 16 knots, yet has already clocked speeds in the high 20s during 6,000 miles of shakedown sailing. Three fixed headstays and a detachable bow sprit change the boat from a family cruiser to a competitive racer. A hydraulically lifting keel, which minimizes draft, allows the boat to anchor close to shore.

Internal volume is large enough to accommodate 10 guests and eight crew, along with some nifty gadgets. The amidships owner’s suite features a glass divider combining a television and navigation screen, and a voice-controlled software system works the lights and blinds.

In the en suite is a full-size carbon-fiber bathtub. An 8.8-foot-long video wall in the upper salon plays a whimsical underwater scene. Magnets hidden under the surface of the coffee tables, dining areas and bedside cabinets make matching magnetic plates and glasses sea-safe when under sail.

Margo Vrolijk, who developed the interior décor, looked to the owner’s home for reference, blending teak furniture and woodwork with fabrics and light-colored panels and bulkheads. “The concept is inspired by the how the family lives ashore and we translated that into an easily controlled sailing yacht,” she said.

“The owner’s achievement in getting the right team around him is a blueprint for how a project like this should be managed,” said Hawkins. “The emphasis with Path is on blue-water performance cruising. Having a powerful sail plan forward means you can step up and down the gears depending on how much breeze there is. The boat’s versatility is testament to the owner’s clear vision from the outset.”