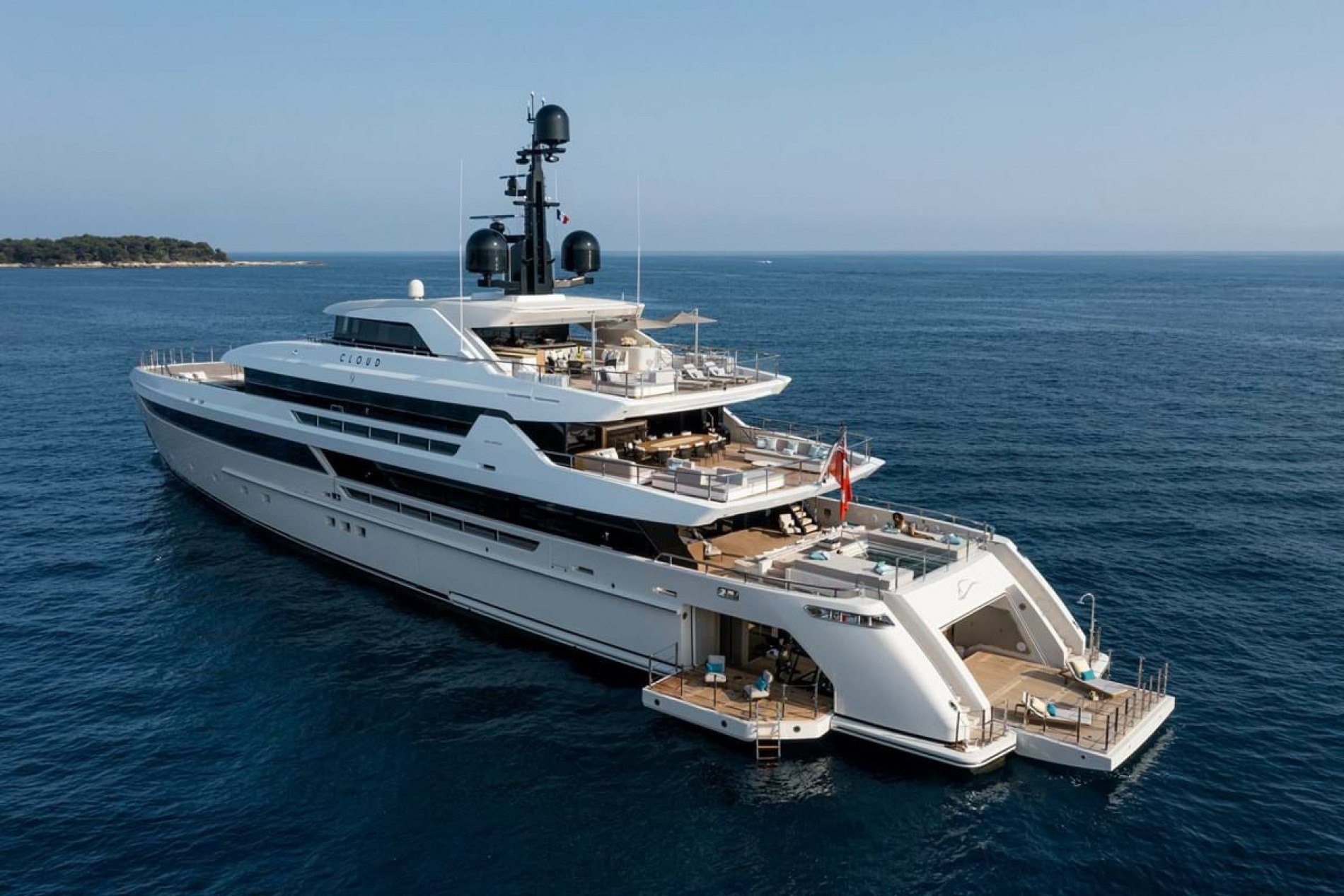 CLOUD 9: THE FIRST SANLORENZO 62STEEL SUPERYACHT DESIGNED AS A HOME FROM HOME.

As owners plan to spend more time secluded aboard, Sanlorenzo answers their call with a 61.5-metre steel superyacht built for long-term cruising. BOAT explores an airy new home from home.

When the new Sanlorenzo 62Steel was launched in La Spezia in 2021 there was a party, a godmother and a christening. Everything was carried out with the tradition and ceremony befitting plans that were years the making. Only the most vital element was missing: the owner.

This was the first launch the yard had ever done in a socially distanced manner and the owner, separated from the occasion by the restrictions of the pandemic, viewed it remotely on a livestream. Surreal? Yes, agrees Antonio Santella, Sanlorenzo’s vice president of superyacht sales and director of new product design. “That has never happened before in our history. But the show must go on.”

The 62Steel was developed to slot into Sanlorenzo’s Steel superyacht range between the 52Steel, which lies inside 500GT regulations, the 57Steel and the company’s 64/70-metre flagship. This is the first of this new line, built on the same platform as the larger 64 and completed despite difficulties and delays in the supply chain that plagued businesses in 2020.

Sanlorenzo has no wish to extend production beyond 70 metres, but it did want to evolve a modern, keen-edged range for its loyal clan of 900 owners, past and present, to move through when they wanted to explore further or live and work on board for longer periods.

“The story of this yacht was born in-house because we have long experience and contact with the family of owners of yachts of all sizes, so we were able to capture all the requests and dreams,” says Santella. This was exactly the case for the owner of this yacht, a longtime owner of a 46-metre Sanlorenzo who wanted to spend more time on board and have more space to enjoy with his family. It’s also an approach likely to find wide appeal in a post-pandemic world, where many owners are placing greater value on the seclusion and comforts a superyacht provides.

Sanlorenzo’s objective was to produce a yacht that had expansive private spaces and bright, open views to connect guests with the sea. One feature was paramount: a large owner’s suite on the upper deck with windows out on the world, a totally private terrace and swimming pool and a study. In addition, it was to have an adjacent saloon that could be used exclusively by the owner to form a private apartment across the whole deck.

Another essential was to have a large beach club area that would belie the yacht’s size with space and facilities for 12 guests. The 62Steel also had to have two large garages for a main tender of 9.5 metres and a service tender and toys, with these located in the middle of the boat so that launching and operation would not interfere with the beach club zone.

he lines were drawn to give the yacht a purposeful profile, with a full, chined bow and straight lines that include the deck windows running aft. Accommodation and technical spaces are laid out over five decks, with the exterior design, structure and general arrangements all done in-house at Sanlorenzo. A steel hull and aluminium superstructure strikes an equilibrium between strength, cost and speed.

Compared with previous generations of Sanlorenzo designs, this harnesses numerous technical advances. To take one example of the step change she represents, the 62Steel can make a comfortable 16.5 knots, but ease back to a long-range cruising speed of 11 knots, and the fuel consumption shrinks to 200 litres per hour, less than the owner’s previous very much smaller, lighter yacht. This is a boat designed to be at home in the Mediterranean but easily able to cross the Atlantic or the Pacific.

While the exterior design and general arrangements were all done in house, Francesco Paszkowski Design was brought in to draw up a plan that emphasised the yacht’s crucial open spaces.

“It’s very important to note that this is a second boat for the same owner, and we knew each other from [the previous 46-metre boat] so we started this project with a nice connection,” says Margherita Casprini, who worked on the 62Steel project with Francesco Paszkowski. “We know all the family very well and we started with a comfortable approach, understanding that they want to have a very private family boat.”

An important aspect was the owner’s wish to use discreet, natural colours and Jerusalem stone, as was featured on his previous yacht. This pale, soft textured limestone, used on some of the greatest public buildings of antiquity, is a theme throughout, but in particular abundance in the entrance to the main saloon from the aft deck, the wall that divides the dining room and lounge in the saloon and the main lobby stairs.

“Starting from that choice we put together a mood board – a selection of natural materials – and then we collected all the other materials around that,” explains Casprini. “The concept was to have a comfortable and really relaxing atmosphere on board, so we also used oak treated with smooth matt grey colour and have some accents on some furniture with ebony as a point of attraction.”

Casprini’s virtual tour starts in the beach club at the aft end of the lower deck. One of the most impressive areas of the yacht, she points out, the space expands with a large stern platform and balconies port and starboard to form an area totalling 117 square metres. This area is, says Casprini proudly, “the masterpiece of this boat and the 62Steel line – together with the area in the bow.”

Casprini is referring to the other cornerstone of this design, the owner’s apartment on the upper deck. The bedroom itself looks directly forward though floor-to-ceiling windows. Two external doors open out on to a private terrace and sunbathing area and a pool. Layered beyond that is a longer view out over the bow to the horizon. This is an entirely private area, totally sheltered from view from the bridge deck above.

The whole of the upper deck can be reserved for the owner’s exclusive use. Accessed by a lift, this deck includes a study in which the owner can work with someone else without disturbing with his wife in their apartment. It includes an adjoining sky lounge which can be used as the main cinema area for the family, or closed off so that the entire 210 square metre space is a private apartment.

Guest accommodation is on the main deck in four twin and two double cabins. The concept in these was to have a snug feeling. The walls are finished in textured wallpaper and oak, and there are bookshelf niches in Jerusalem stone with metal detailing and desks in contrasting dark, gloss-finished ebony. The bedheads are covered with velvet.

In the VIP twins, a rail has been inset into the wall panels so that the beds can slide together to form a double. Where stainless steel detail has been used here and elsewhere throughout the yacht, it has been treated to create a darker, cloudy matt finish. “We were looking to have a smooth, vintage effect everywhere,” explains Casprini.

The shared spaces, the dining room and saloon on the same deck, are in the same theme. The centrepiece of the dining room is a large table especially designed for the yacht by Francesco Paszkowski Design. This is ebony finished in 100 gloss to give it a lustrous, mirror-like finish, while two additional leaves can extend it to seat up to 16 people. This room is bright, with views on both sides and light drawn in from the main saloon and aft deck through a window. It is, nevertheless, private as the glass contains a laminated layer of metallic mesh.

Altogether the living areas on the main deck share 90 square metres of space, including the saloon and the connecting aft deck. As in the owner’s saloon/cinema room on the deck above, the sofas and armchairs were all made by Minotti. A games table to starboard was made in ebony with a metal finish in the same style as the dining room table, and the central field is a soft carpet woven in a geometric design. This was chosen by the owner and his wife and handmade specially in two colours of silk and wool by a small company in Florence.

As elsewhere on board, the walls are in a matt grey-finished oak with details of Jerusalem stone and cloudy, matt-finished stainless steel. It looks much lighter than this sounds, since the saloon joins up with the outdoor living area and guest swimming pool via connecting doors.

The 62Steel is a formula, says Sanlorenzo, that provides almost everything that the shipyard’s larger flagship can offer. While not a full custom build, it has layout options that allow owners to choose an interior to fit their plans. Powered by two Caterpillar 3512C engines, she is capable of a top speed of 16.5 knots, yet has a transatlantic-plus range of 5,000 nautical miles at an easy 11 knots.

Careful thought was given to amenities for longer term living for guests and up to 14 crew. “We have taken care of the comfort of the crew,” says Antonio Santella of Sanlorenzo. “They have space where they can have a gym, they have a huge area for a dinette, their own galley. It is important for them to be happy.”

Self-sufficiency for long-term cruising was built into the formula. “Everything is oversized – the generator, the watermaker,” Santella adds. “There is a huge space on the lower deck for a big freezer and fridge, a cool room for garbage and a compactor. These are all for the longer times we believe people want to spend on board.”

The new owner of this yacht will spend this season in the Mediterranean but then plans to go much further afield. The next stages are likely to be the Caribbean and the Far East. This yacht was always conceived as a home from home, to be enjoyed by the family and not for charter. The intention is to spend as much as five or six months on board each year.

This combination of wide-ranging capabilities, space and comfort at this size is proving to be something of a sweet spot for Sanlorenzo. As this yacht was launched, hull No 2 was in construction to be delivered at the end of this year for a second owner, and the hull and superstructure of No 3 have also been completed for a fast delivery.

“The structure and the design and technical improvements are all points where the owner of a smaller Sanlorenzo can see a big step,” says Santella. “This design really has become the only 62-metre yacht on the market with the same features as a yacht of 80 metres and over.”

This first Sanlorenzo 62Steel completed all her sea trials and was handed over in March 2021. The delivery came just as countries tentatively began to loosen their borders again. By the strangest of coincidences, this yacht’s defining concept of private spaces that open out to a boundless world could hardly be more appropriate. Casting off will feel like being reborn.