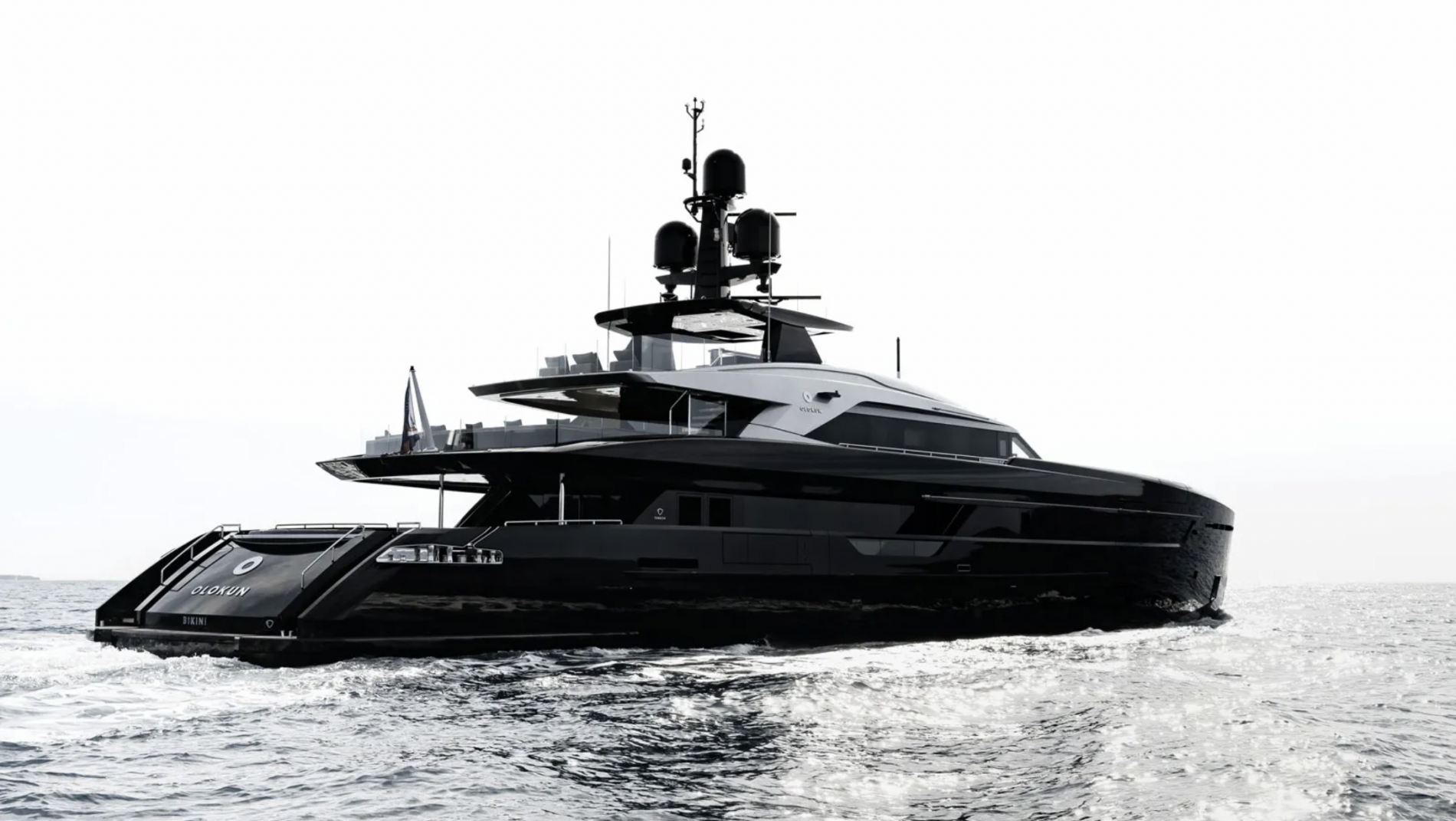 Tankoa’s 50-metre Olokun may be the third in a series, but a bold, original design approach makes her a true individual. Risa Merl explores her minimalist interior and clever customisations...

“I don’t understand why people put so much stuff inside boats,” muses Dio Rodriguez, head of design studio and furniture maker Casa Dio and interior designer for the 50-metre Tankoa yacht Olokun.

Much like the Coco Chanel adage that “it’s always better to be underdressed”, Rodriguez subscribes to the idea that less is more. This is abundantly apparent in Olokun’s minimalist interior that pairs white furniture and carpets with open-grain oak floors and ceilings and jet-black walls. Certainly a rarity in yacht interiors, the black oak walls that clad the living areas and guest cabins mean the eye is drawn instead to the blue sea beyond the windows.

Olokun is the third hull using Tankoa’s S501 series platform, but her stark interior and gleaming black and silver exterior paint make her stand out from her predecessors, Vertige and Bintador. Francesco Paszkowski designed the S501 series, creating a contemporary exterior with a vertical bow, imposing stern and compact superstructure. There is a good balance between the deck overhangs and vertical lines, while geometric windows give the feeling of movement.

Hull No 1, Vertige, was launched in 2017 and has proven herself a successful charter yacht. Bintador won the category of Displacement Motor Yachts Below 499GT (40 metres and above) in the World Superyacht Awards 2020, and has been used extensively and privately by her owner. The S501 series comes with either traditional or hybrid propulsion, the latter of which was chosen for Bintador and hull No 4, which has already been sold and will be delivered next year.

Olokun was started on spec by the Italian yard and was halfway complete when the owner arrived on the scene, introduced by broker Fernando Nicholson of Camper & Nicholson’s Miami office. “The client and owner’s rep [Rodriguez] liked the design and style, and liked that they didn’t have to wait for two years for delivery, so they came to visit the yard to see what they could and couldn’t do,” says Giuseppe Mazza, Tankoa’s sales and marketing manager. “They wanted a completely different feel and colour scheme in the interior.”

Usually, Tankoa would suggest Margherita Casprini, part of Paszkowski’s design team, for the interior. “But when you have a client who comes with his own interior decorator, they know what they want,” says Mazza, “which, from our side, is cool – we saved time because they were decisive.”

Rodriguez served as both designer and owner’s rep for the project. Having worked with Olokun’s owner for a decade on various projects – from houses and yachts to planes – he knows this client well. The private jet he also designed for the owner has a very similar style to Olokun’s. “We have 100 per cent compatible energy, so we have fun,” says Rodriguez. “If I don’t have fun, I would rather not take on a project.”

His Casa Dio studio is based in Miami’s Design District and there is also a showroom in London. Primarily a furniture maker, Casa Dio has embarked on a multi-million dollar, multi-year plan to expand the studio’s design offerings. This includes commercial, residential and yacht interior design. While Casa Dio has done various yacht interior refits, Olokun is its first new build. It’s also both the designer’s and owner’s largest yacht project to date. The owner is a yachting enthusiast who owned a 46-metre before this. While Olokun is the third boat Rodriguez has designed for this particular client, it’s the first where he has had so much leeway on the design.

Rodriguez served as both designer and owner’s rep for the project. Having worked with Olokun’s owner for a decade on various projects – from houses and yachts to planes – he knows this client well. The private jet he also designed for the owner has a very similar style to Olokun’s. “We have 100 per cent compatible energy, so we have fun,” says Rodriguez. “If I don’t have fun, I would rather not take on a project.”

His Casa Dio studio is based in Miami’s Design District and there is also a showroom in London. Primarily a furniture maker, Casa Dio has embarked on a multi-million dollar, multi-year plan to expand the studio’s design offerings. This includes commercial, residential and yacht interior design. While Casa Dio has done various yacht interior refits, Olokun is its first new build. It’s also both the designer’s and owner’s largest yacht project to date. The owner is a yachting enthusiast who owned a 46-metre before this. While Olokun is the third boat Rodriguez has designed for this particular client, it’s the first where he has had so much leeway on the design.

Tankoa considers itself a boutique yard capable of a high level of customisation, even to projects initiated on spec. “We only do two yachts per year, so we can achieve things that others can’t,” says Mazza. Thus the yard was game for the gauntlet thrown down by the client and his designer. Challenges included reconfiguring the layout and cutting metal in the main deck bulkheads. The owner requested that the main deck VIP cabin be connected to the owner’s cabin, so the yard had to cut the metal of the bulkhead and redo all of the completed wiring around that area, which took at least an extra two weeks.

These changes created a massive owner’s suite. Just aft of the master, the VIP has two sofas, a bed, desk and en suite, so it can be used as an office or an extra bedroom. The master itself has a bed on the centreline and a his-and-hers bathroom forward, finished in white Calacatta marble. Tankoa always proposes for the owner’s cabin to have foldable terraces, and in the case of Olokun they opted for one on each side, complemented by opening windows to let the breeze through. The master is a darkened cocoon, with black ceilings and floors contrasted with a white headboard and linens on the bed, and light oak furniture.

Olokun’s interior decor is minimal with clean lines, no frills and a high contrast between black, oak and bright white soft goods. Rodriguez was inspired by Japanese design, “the simplicity, along with its discretion in its colours, shapes and structure”, he says. “I wanted to achieve clarity through the elimination of the non-essential, leaving only the essential.”

Casa Dio designed all the custom-made indoor and outdoor furniture for the yacht. Though minimalist in appearance, the furniture and interiors were designed with comfort in mind, and what Rodriguez finds comfortable and calming at the moment is a subdued colour scheme of charcoal and black mixed with open-grain natural oak and smooth, honed stone.

Paszkowski, meanwhile, says he met the yard’s brief for “outdoor entertaining spaces as large and as comfortable as possible on every deck, with an interior that preserves its purpose of offering shelter without losing its connection to the sea”. To achieve the latter, gunwales on the main deck were lowered to allow for panoramic views when guests are seated in the main saloon, where white sofas are paired with Casa Dio Makotto coffee tables made from Calacatta stone with strong black veins.

Throughout Olokun, the dark walls are balanced with white Loro Piana soft goods, with cashmere throws, wool and cashmere rugs and interior furniture fabrics in Loro Piana’s “absolute white” twill. The walls won’t stay blank for long, as the owner has a curated collection of art specifically for this project that has yet to be installed. What won’t be joining the art, however, is the distraction of any televisions – there are none in the shared living spaces or the owner’s cabin. “The owner doesn’t like televisions, so you don’t have them in the yacht except in the guest cabins,” says Mazza. “He said, ‘When I’m on board, I want to enjoy the yacht and go swimming. I’m not going to stay inside and look at a TV.” The bridge deck also forgoes an upper saloon-cum-cinema layout, as is popular on many yachts today. Instead, aft of the bridge is a black-walled formal dining room that opens out onto an even larger dining table of the aft bridge deck.

But the owner’s cabin, main saloon and upper deck saloon all have wiring for televisions to be installed in the future. Tankoa pushed for this sort of future-proofing that would prime Olokun for easy resale or to be used for charter one day. A good example of this can be seen on the lower deck. The owner travels with his own 15-metre chase boat and has no intention to use this space as a garage. So rather than creating a dual-purpose garage/beach club as on previous S501 yachts, Olokun’s garage is outfitted purely as a luxury space clad in teak. But hidden behind the wood are the foundations for a functional garage, with a crane as well as a cradle for a seven-metre tender.

“The client wanted a larger beach club, but we told them to think about resale – you won’t sell the boat if you don’t have a garage,” says Mazza. The transom of the beach club folds out to create a wide swim platform, which can be adorned with plush grey chaises shaded by black umbrellas. The beach club is complemented by other grand areas for outdoor entertaining on board, such as the large forward bow lounge and the sundeck with a spa pool, bar and table for al fresco dining.

Because of Covid-19 and travel rules changing day by day, the owner didn’t come to the yard as often as he might have. The lack of yard visits was made up for with plenty of Zoom tours, as well as meetings in London, where Casa Dio has an office, when it was allowed. Unfortunately, the owner couldn’t even make Olokun’s launch but he was “extremely thrilled” to see the final product, says Rodriguez. “It was truly a wonderful experience watching his reaction. Getting to watch the emotions of the owner seeing this project come to life after an entire design process is one of the main reasons why I enjoy what I do.” Olokun’s owners will spend their first season in the Med, then the yacht will likely go to Florida and the Caribbean for the winter season. One can imagine how the black walls will perfectly frame the brilliant blue waters of these lower-latitude cruising grounds.

Mazza is satisfied that Tankoa was able to do something completely different with Olokun. “The interior design is very particular; some people like it a lot, while other people say it’s too clean,” says Mazza. As for the “particular” interior, Rodriguez makes absolutely no apologies. This isn’t a boat meant to appeal to the masses, but to suit the tastes of her owner alone. “So many boats are cut and paste. Do you want someone else’s taste or do you want something made just for you? ”.