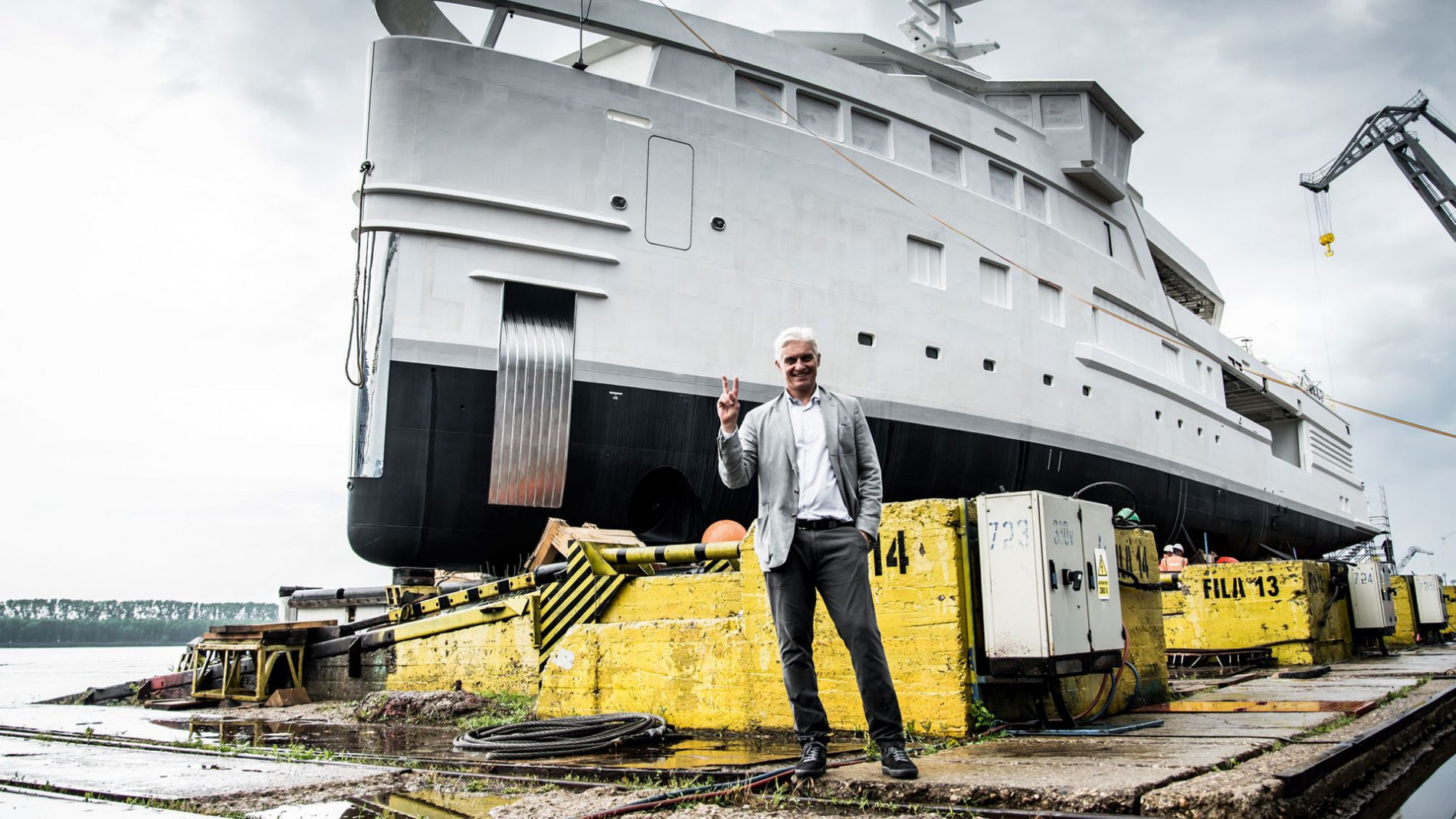 ON BOARD LA DATCHA WITH OWNER OLEG TINKOV

The Russian self-made billionaire has always wanted to explore: first beyond the Iron Curtain and now even further on his 77m SeaXplorer, as he tells Caroline White.

“It’s the same tired song and dance every time: Portofino, Porto Cervo and Monaco. The same boring triangle,” says Oleg Tinkov. “There is so much more to the world than the Mediterranean or the British Virgin Islands. This is just five per cent of the world’s coastline and, being the adventurer that I am, I’m eager to explore the remaining 95 per cent.”

He’s speaking from the top of a mountain in the highest ski resort in Europe, Val Thorens, where he’s stuck at his La Datcha chalet because of bad weather. It’s an intrepid sort of problem – but then nothing about this self-made entrepreneur, with a net worth that Forbes puts at $2.3 billion (£1.85bn), could be called boring. “My son and I have already conquered the North Pole and the South Pole. Few have journeyed to both poles [within 12 months].”

To that end, in 2020 Tinkov took possession of the second SeaXplorer expedition yacht, a 77 metre that launched in June 2019 – and one of the most thrilling superyacht projects to grace the pages of BOAT International in recent years. The SeaXplorer range – hull one of which, Anawa, was delivered earlier in 2020 – was created by Dutch commercial yard Damen, expert in building tough offshore rigs and tugs. The company’s superyacht arm, Amels, was brought in as a design partner to ensure flawless finishes inside the yachts, as was Azure Yacht Design and Naval Architecture, which worked on exteriors.

The magic ingredient in this concept was advice from adventure specialist EYOS Expeditions, which added a mind-bending wish list of features based on real experience on world-roaming yachts. The whole package is an adventurer’s fantasy come true.

But this particular adventurer is a fascinating subject in his own right. Tinkov was born in 1967 in Leninsk-Kuznetsky, in south-west Siberia, where his father and grandfather both worked as miners, and his mother was a seamstress. In Tinkov’s autobiography, his father seems a rather exceptional man, who taught his son to be honest with himself, resilient and direct – as well as to embrace the world beyond the Iron Curtain.

Growing up in a period of political stagnation under Brezhnev, suffering the privations and restrictions of withering Russian Communism, young Tinkov grew to value independence of mind. He was an accomplished cyclist, winning major competitions and attending cycling camps – and there he started to buy goods that were hard to get back in Siberia, to sell for a profit at home. You could buy four pairs of jeans for 50 roubles in Tajikistan and sell them for 200 roubles each in Leninsk-Kuznetsky. Military service followed – after which the KGB tried to recruit him (he politely declined) – and then the St Petersburg Mining University, where he met his wife, Rina Vosman. While studying he expanded his sideline operation, buying goods from foreign students to sell back in Siberia, as well as soaking up the revolutionary air.

The subsequent dissolution of the Soviet Union allowed him to truly launch his career as an independent-minded entrepreneur, setting up many businesses that have since become household names in Russia. Tinkov’s ventures have included a chain of music shops, a record label, one of the country’s top frozen-food producers (named after his daughter, Daria) and a brewery and restaurant business. Tinkov sold these for profit to start something perhaps even more revolutionary. His current passion is Tinkoff, Russia’s first purely online bank, founded in 2006 and now serving more than nine million customers, making it the largest digital bank in the world. Tinkov also owns the La Datcha Tinkoff Collection of rental properties at Cabo San Lucas in Mexico, Astrakhan in Russia and Forte dei Marmi in Italy. There are also lodges in the French ski resorts of Courchevel and Val Thorens.

The new yacht is named La Datcha and crowned the jewel of this collection. “I’m completely open about the fact that it’s been intended for charter from the get-go. Hence the two master bedrooms – perfect for two families. Hiring a 12-person boat for one family is much too expensive, if not imprudent,” Tinkov says. “It can accommodate 12 or more for a trip to Greenland and other winter destinations. It’s been a commercial undertaking from day one, which is uncommon in Russia. Here, people want to seem like the sole owners of the stuff they buy.  First, they’ll say it’s their private boat. Then after a year they’d rent it out ‘to a friend, just for a week’. I don’t care for this kind of false modesty, so I make no secret that the SeaXplorer is going to be a charter yacht meant to make a profit.”

Cycling remains a passion for Tinkov – he owned a professional team from 2013 to 2016 – but yachting is a recent pursuit. “I’ve never owned one aside from La Datcha at Forte dei Marmi,” he says. “It’s a Pershing 9X, a daily cruising powerboat. It’s mainly there for La Datcha Forte dei Marmi guests, who can book daily or longer charters.”

For Tinkov, adventure is the aim, and the SeaXplorer is the tool. “For me it’s boring to buy another white boat, to sit on the sundeck and just sweat my arse and drink champagne,” he says. “That’s for other rich and fat people. I am quite energetic still. I like to move my arse, that’s why an explorer perfectly fits me.” A moment later, he requests that I not cut the word “arse”. Tinkov certainly comes across as frank and incisive – but he’s also irreverent and amusing. As he says at one point: “I don’t care. I know that I have a huge excuse.” And he does, a 77-metre one.

“I wanted to reach destinations such as the Russian Arctic, because I believe that these white boats which are swimming around the Mediterranean and the Caribbean are the past and explorers are the next big thing,” he says. “I’m glad that I am on the edge of the trend.”

He had been watching the superyacht market – “Italian ones were not quite up to snuff, German I could take or leave” – he says. But Amels, he decided, was just right. “Unlike many in Russia’s business community, or oligarchs if you prefer, I make my own money, so I don’t go for the priciest stuff – I go for the best. For example, I choose to fly Falcon instead of Gulfstream because I believe Falcon jets offer better bang for your buck. Gulfstream doesn’t live up to its price tag. In this regard, Amels is like Falcon – not cheap, but worth the money paid.”

But it wasn’t an entirely dispassionate decision. He had seen and admired the Tim Heywood-designed 62.4-metre Event, the first Amels 199 Limited Editions superyacht, whose forward tender garage and foredeck helipad – but particularly her near-vertical bow – made her a radical design departure for the yard. Tinkov came close to buying her and even made some bids, but then he saw the SeaXplorer design. “You could say it was love at first sight. The thing that immediately caught my eye was its masculine, manly features – the boat just looks sexy. You can tell it’s strong and ready to take on the world.”

Tinkov made modifications to the design before build work began – major enough that they took six months to incorporate, most significantly extending her from 65 to 77 metres, as well as rejigging the layout.

He also brought in St Petersburg-based interior designer Vasiliy Shprits, who designed his La Datcha properties. “I told him it had to look masculine, really manly, and of course it’s a SeaXplorer, so it needs to be versatile,” says Tinkov. “It will visit the north seas, the Arctic Ocean, the Northern Sea Route, Alaska, the Kamchatka Peninsula and the Kuril Islands. On the other hand, we are planning to go to the Galápagos Islands, Cabo San Lucas, the Solomon Islands and the Cook Islands – the warm distant seas hardly accessible by boats. I told him it had to be a good match for the winter and for the summer alike. Vasiliy expressed it with colour.  In the northern latitudes the boat will be red, while in the south it will be blue.” This will carry through the otherwise neutral-toned design in interior lighting and touches such as cushions.

The design upon which all this is based was inspired by the success of Damen’s Yacht Support range of vessels, with its patented Sea Axe hull form – which “does indeed resemble a big Norwegian axe”, says Tinkov. This was modified to suit the more sedate pace of an explorer yacht, but it means a comfortable ride even in rough conditions.

La Datcha meets the IMO’s Polar Code – perfect for Tinkov’s plans. The Ice Class hull has a high tensile belt with increased plate thickness and extra intermediate ice framing – perfect for safe operation in polar waters. Even small changes in polar winds and currents can quickly lead to a yacht being surrounded by close pack ice, which can be dangerous for yachts without extra strengthening.

There are plenty more elegant solutions on board, from air-conditioning powerful enough for the Amazon to retractable stabilisers that won’t get knocked off by ice and enclosed wing stations. There’s a mud room for changing out of mucky outerwear before entering the boat, kit to allow 40 days of luxury service at sea and a hospital. The prize feature, however, is a protected observation deck in the nose of the bow, to watch paradise unfold before you.

But the ethos of the SeaXplorer is that an expedition yacht should do more than just get you to the ends of the Earth, it should help you explore them when you get there. The boat will come with every imaginable toy, as well as “a submarine for southern waters, a snowmobile for the north, even two of them. There will be about 20 bicycles of various sizes and models – pro class bikes of the type ridden by [Slovakian cyclist] Peter Sagan,” says Tinkov. There will also be a dive centre with a decompression chamber and all the gear for heli-skiing, including two Airbus H125 helicopters, a fully certified helideck and enclosed hangar.

“I’m an avid skier,” says Tinkov. “We may have even set the world record with my son when we skied more than 30,000 metres in one day down Zhupanovsky volcano in Kamchatka [in the far east of Russia], at least that’s what people tell me. For my first year on the SeaXplorer, I’m planning ski trips to the Kuril Islands, the Kamchatka Peninsula, Chukotka [also in Russia’s far east] and Alaska.”

It feels as if the SeaXplorer concept has found its match, an owner who will exercise all of its extraordinary potential. And it all of his.