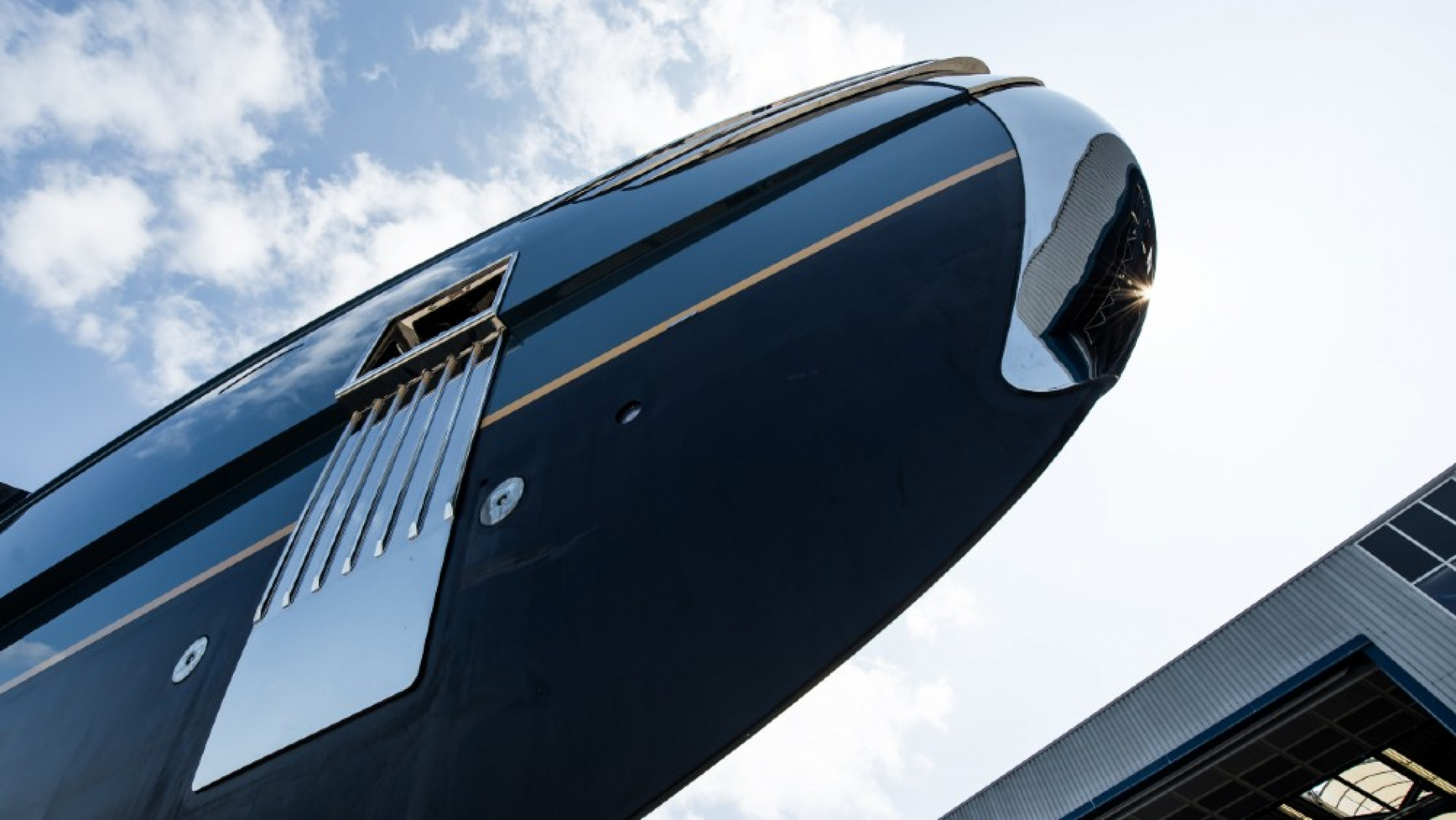 The vessel was named after the golden ratio which, according to lore, reflects natural order and beauty.

Royal Huisman has an established track record of building complex, interesting and distinctive sailing superyachts, including the 184-foot Aquarius and the 190-foot Ngoni. Its just-released Phi is a 192-foot motoryacht that is just as stunning and unique as its sister sailing vessels.

The Dutch yard is being coy about releasing too many details before the yacht is handed over to the owner later this year. Phi‘s interior by London design firm Lawson Robb is definitely a no-go area, but readers can get a sense of the naval architecture and exterior design through images the yard just issued.

Dutch designer Cor D. Rover, with years of successful designs in both the custom and semi-custom sectors, designed Phi’s exterior, naming it after a mathematical concept for the Irrational number Phi that has been around since the ancient Greeks. Also known as the golden ratio, Phi goes on forever after the decimal point without repeating itself, with the result that it has gained a reputation for reflecting never-ending beauty and natural harmony. Rover ran with the concept, saying he was inspired by “the galaxy, the ocean’s surface and the underwater world” in forming the design.

How those three big ideas translate physically into the actual design will require a longer explanation from Rover, now sworn to secrecy, but it’s clear that Phi’s naval architecture by Van Oossanen Naval Architects gives the yacht its long, sleek form. The Fast Displacement XL hull keeps it under the 500-gross ton designation and, according to Royal Huisman, makes it the longest superyacht under 500 gross tons. The design also gives Phi a respectable top speed, along with increased fuel efficiency.

The design was a challenge to pull off technically, said the shipyard, but Royal Huisman is used to facing complex technical problems. It also faced outsized challenges on its other big motoryacht project, 406, which will be the world's largest sportfishing yacht once launched. The 171-footer not only looks like an authentic angler’s convertible on steroids, complete with a massive fishing cockpit and billfish fighting chair, but it will also boast impressive top speeds on its way to offshore fishing grounds.

Royal Huisman CEO Jan Timmerman says the shipyard tries to accommodate the big, seemingly fantastical ideas of owners and designers, “rather than trying to persuade them to scale back their ambitions.”

PHI will also come with a matching 118-foot shadow boat, courtesy of the same design team but built at Alia Yachts. Both mothership and shadow boat will be revealed in more detail by the end of the year.