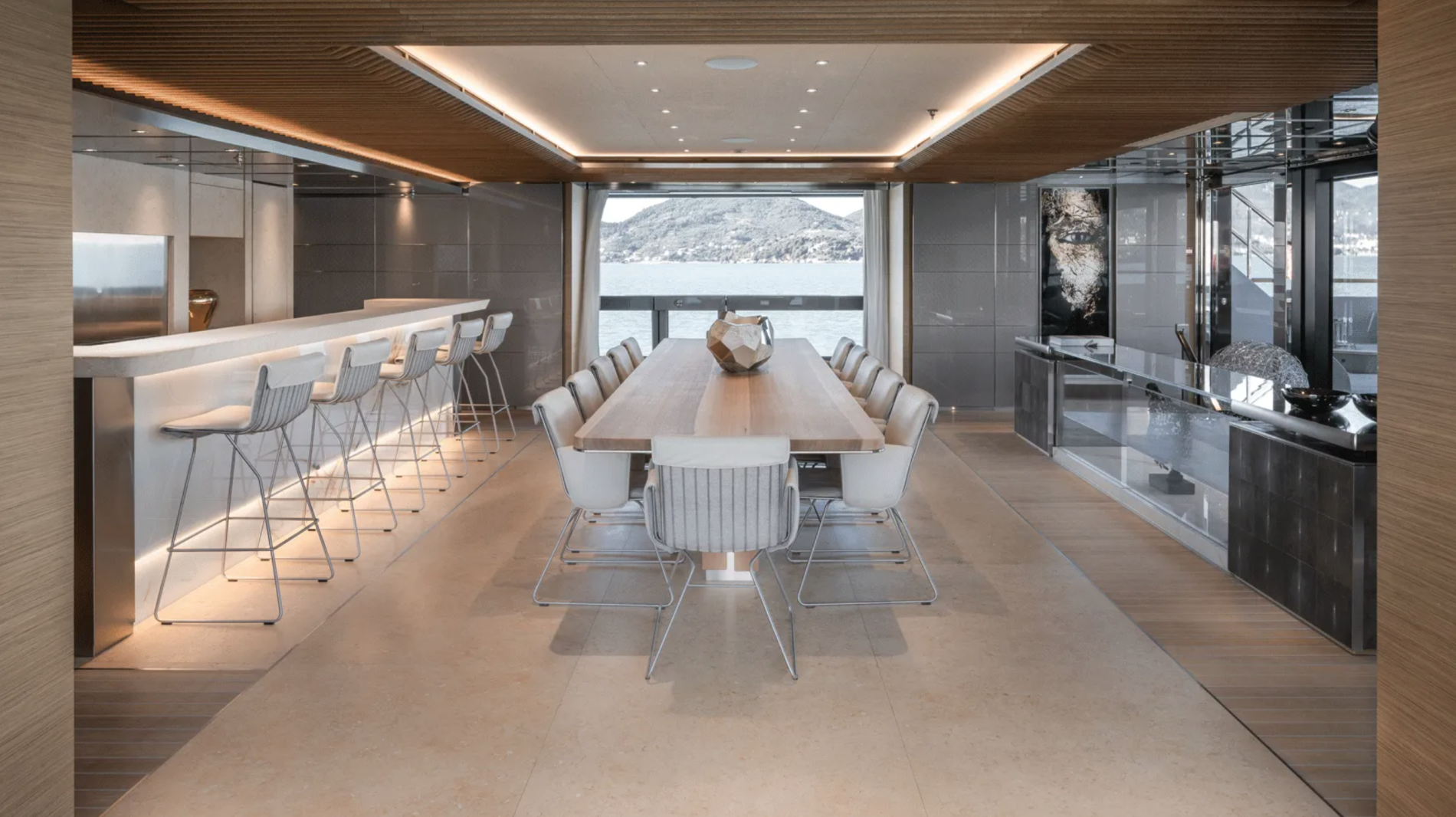 SUPERYACHT DESIGN TRENDS TO LOOK OUT FOR IN 2021

The past year has seen all manner of innovations in superyacht interior design, with many of the most striking new developments taking inspiration from the past in order to realise exciting visions for the future. We take a look at what's in store of yacht design in 2021...

Modern, yet retro. Futuristic, yet classic.

It would be impossible to sum up the last 24 months of superyacht interior design with just one phrase or word. Since the beginning of 2020 we have witnessed many design innovations, such as the creative use of glass and unusual interior layouts. At the same time, we saw design throwbacks with the return of high-gloss finishes, mid-century furnishings and some distinctly 1970s-inspired geometric prints – all with a modern twist, of course.

The push to sustainability in superyachting also came to the forefront, with companies offering up a wealth of creative ways to turn eco-friendly materials into luxe applications on board. And as always, yacht owners made their mark on the yachts’ interiors with bespoke elements, such as unique helm chairs plucked straight out of their favourite automobiles. It was a year of innovation, yet pleasantly reminiscent of past design trends, too. For many, it’s the best of both worlds – and certainly the perfect way to usher in the new decade.

There’s an old joke that yacht interiors are so terribly formulaic that, even blindfolded, you could find your way around them. We’ve slowly seen a move away from the standard general arrangement in recent years, notably with smaller saloons giving way to larger exterior deck living areas (see the 70 metre Feadship Joy, launched in 2017). But 2020 really shook up this stereotype.

Step on board the 64 metre Sanlorenzo Attila wearing a blindfold and you will find yourself tumbling down the open stairwell to the beach club or bumping into the indoor-outdoor galley-cum-dining-room that’s located on the main deck, where the main saloon would normally be. Sanlorenzo shook up interior layouts further with the groundbreaking SL102. Automotive designer Chris Bangle created an asymmetrical yacht that features a full-beam design on the port and a passageway to starboard on the main deck.

The Sunseeker 131 Elysium brims with customisations that make this semi-production yacht anything but standard. These include a bespoke interior layout to suit the needs of her owner, Ron Gibbs. Preferring to spend most of his time outside, Gibbs didn’t feel the need for multiple interior lounges. The upper deck saloon on Elysium has been transformed into an owner’s suite, replete with the master cabin adjacent to a private owner’s aft deck, while a gym is found forward between the master cabin and bridge, where you’d normally find the captain’s cabin. The owner of the 65-metre Admiral Life Saga takes a similar approach – the majority of the main deck is an indoor-outdoor saloon adorned in weatherproof materials, which can be closed off to protect guests from the elements when required. He also finds multiple dining rooms to be extraneous, opting for one big dining table on the upper deck.

Beyond this, we have seen more variances within the rooms themselves, with beds offset from walls in master suites, and a focus on ever-larger forward bow lounges. The Mangusta GranSport 45 even managed to fit a pool into its forward lounge – not bad for a 45 metre yacht.

Good food is all the sweeter when shared with good company and al fresco dining spaces sit right at the heart of the action when banqueting on board. This year, though, the humble galley is finally getting its moment of glory as owners start to promote kitchens from their position backstage to a main deck showpiece front and centre. STEININGER Designs have unveiled a range of ultra-chic, sculptural islands that are made bespoke with the 'show galley' concept in mind. Its minimalist design conceals a number of features including a hob and touchscreen control panel, with draws and moveable surfaces that sit flush when not in use.

In a similar fashion, the award-winning 136 metre Lürssen Flying Fox features an open kitchen on the bridge deck aft where chefs whip up a storm in front of a live audience. This open-concept gallery can also be found in action board Sanlorenzo's flagship Attila, home to an enormous grill as well as specially designed storage solely for cuts of meat, reflecting the South American owner’s love of food.

Shipyards have been investing heavily on glass R&D in recent years, leading to more innovative, flexible use of glass for superyacht exteriors. The 60 metre Abeking & Rasmussen superyacht Excellence, for example, has five-metre-high vertical glass panels supported by two thin steel frames. Fitting the panels and, more importantly, ensuring that the mirror finish on the outside wasn’t distorted, was something of a challenge, according to the yard’s in-house team. And then there's the awesome geometric glazing on Nobiskrug's Artefact - 70 tonnes of it - which not only serves to provide unrivalled views but has a dual role of reducing motion sickness for guests on board.

According to Miami-based studio RADYCA, this is just the beginning of an era of new possibilities. In the past, the use of glass was restricted because it was heavy, and while weight remains relatively unchanged, technological advances in manufacturing are now allowing designers to push the envelope of glass design beyond windows and experiment with structural integration by putting more complex glass geometries to the test. "There’s a prototype I’ve designed where panes of structural curved glass create impressive views and the illusion of having a two-deck rather than a three-deck yacht," says Ramon Alonso, founder of RADYCA.

Of course, glass isn't restricted to exterior design either. In 2020 glass was used in practical ways, with privacy glass replacing curtains and shades. In some cases, glass even replaced walls, as seen in the glass-box owner’s lounge found on the Riva Race or the distorted glass walls that separate the bedroom from the rest of the master suite on board Hakvoort’s Scout.

In the driver’s seat

Perhaps unsurprisingly, there’s a lot of crossover between superyacht owners and supercar fans. As a result, automotive styling often sneaks its way into yacht design, whether it’s in the particular swoop of an exterior profile or elements of interior detailing, from drawer pulls to furniture edging.

The 50-metre Riva flagship Race, is a prime example. The yacht was built for none other than Piero Ferrari, a Ferretti Group stakeholder, son of the legendary Enzo Ferrari and heir to the Ferrari empire. He put his automotive-inspired mark on the interior of Race in a sparing yet striking way: the owner’s lounge, just off the master suite, doubles as a mini museum, with autographed racing memorabilia and a portrait of the owner’s own custom Ferrari. But the big surprise is up on the bridge, where the helm seat isn’t your typical captain’s chair, but instead comes directly from the interior of a Ferrari California. Normally, you’d need to turn an ignition switch in the car to adjust the seat, but Riva customised this one so it could be operated and adjusted without this mechanism.

After many years of matte being the finish of choice, shiny, glossy materials are back with a vengeance. Reflective properties were seen in everything from joinery to polished metals and even sparkling, crystal light fixtures (though it’s arguable the statement chandelier never really went away).
Polished stainless steel, shiny brass detailing and mirrored surfaces seem to glisten more than ever.

Take, for instance, the mirror-polished nickel coffee table seen in the main saloon of the 63-metre Hakvoort Scout. The table is cleverly placed under an LCD monitor on the ceiling that plays videos and alters the shine of the table below it, a design conceived by London-based studio H2 Yacht Design.

Even where high-shine is generally avoided, such as on the 84-metre trimaran White Rabbit designed by Sam Sorgiovanni, gleaming details still make an appearance. The yacht’s central bar features a ceiling adorned in gold leaf, while a spectacular floor-to-ceiling light fixture doubles as bar storage.

Superyacht design has always been influenced by the desire to get away from city life and indulge in some serious R&R, and after the year it's been, this rings true now more so than ever. Where in the past, spa setups have been an extension of the beach club in the form of a steam room or sauna, designers are now sketching out areas adjacent to the sea that are wellness centres first, beach clubs second. According to Laura Pomponi, chief executive of Luxury Projects: "More and more we are receiving requests for a full deck packed with everything imaginable to do with wellness: a fully-equipped gym and free exercise floor, sauna, steam room, dressing rooms and showers, with a treatment space adjacent such as a barbershop, beauty salon, massage and relax lounge with detox bar and lounge seating."

The concept stems from the increasing popularity of multifunctional spaces on board: a beach club lounge that doubles as a spa, sundecks with DJ booths and sound systems, or infinity pools with floors that can be raised to sit flush with the deck, transforming the space into a sunlounging haven or dancefloor.

Asymmetrical geometric patterns were the unexpected star of both 2019 and 2020. Yachts such as the 48-metre Baglietto Silver Fox and the 55-metre Heesen Vida even mixed multiple recent trends, blending geometric artwork and high-shine materials. Silver Fox used this technique liberally, which was particularly daring for a spec-built boat. A dividing wall set centreline in the main saloon is adorned in a smoked mirror with brass artwork, cut at angles. Likewise, the tobacco-brown dining table is comprised of triangular cuts of stone that piece together. Asymmetrical mirrored finishings are also found outside, like the shimmering detail on the sundeck bar. Vida displayed a geometric mirror artwork over the dining room table. This pattern is repeated in the wall behind the bar on the upper deck, while a similar piece in the master cabin serves as a headboard. Winch Design also got into the geometric groove with its line of Labyrinth door handles, created for the door hardware company Turnstyle Designs. The handle is cast in Amalfine composite and is available in a variety of finishes.