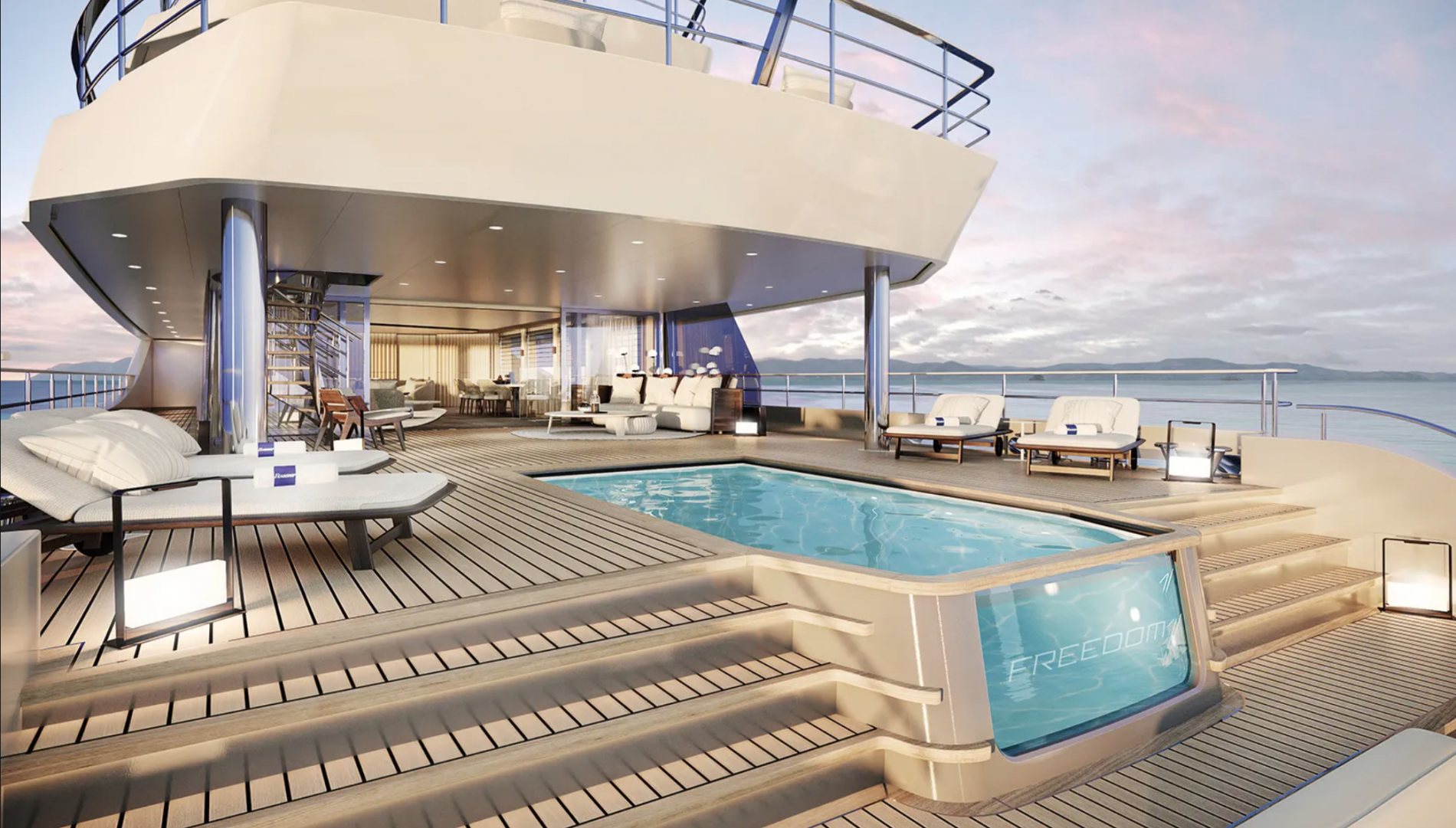 As the focus of life on board moves closer to the water, the beach club is becoming the highlight, learns Claire Wrathall

Given the extent to which the pandemic has altered human behaviour, as we seek to avoid each other, it’s not surprising that yacht owners have sought sanctuary on their boats. “A yacht is the best place to be completely safe,” says Sabrina Monteleone, founder and proprietor of Sabrina Monte-Carlo, the Côte d’Azur’s go-to supplier of deck furniture, furnishings and table settings. “Owners now want to stay alone on their boats; they no longer go out.”

Even last winter in St Barths, nobody was going ashore to actual beaches, according to Monteleone. “No, your own beach club is the place to be now,” she says. “On a big boat, on the first or second deck, you don’t really sense the water. But on the platform, the water is right there; you can really feel the sea. Whenever we do a refit, the owner wants to increase the platform.”

It comes as no surprise, then, that beach clubs have moved on from the time when they were little more than an aft bathing platform shaded by a raised transom door and backed by the toy garage. Now, she says, “they are more like pool houses”, complete with sofas, armchairs and ottomans, adjoining gyms and spas, and perhaps a bar. These days a beach club is somewhere to spend the whole day, returning upstairs only at mealtimes.

Increasingly, too, the platform will be directly connected to the main deck by a staircase. “Because the main deck is becoming the most important area of the boat,” says Francesca Muzio, co-founder of the Milan-based practice FM Architettura d’Interni, whose recent projects include the spectacular interiors (designed jointly with Nauta Design) of the aptly named and soon-to-be-launched 88-metre Feadship Zen designed by De Voogt Naval Architects. She has also observed a change in the way yachts are used. Where once the upper deck was the most important area, she continues, the focus of activity “is moving downstairs”, as owners increasingly request inside-outside spaces “like verandas or loggias” on the main deck.

She partly attributes this to a fear of UV rays. “The sun is the enemy these days,” she says. “People no longer want to be exposed to it.” Rather than gigantic sunpads, they want sheltered outdoor seating areas that are palpably close to the water, possibly filled with greenery and furnished with “couches, rugs, lanterns” and lots of tactile textiles. “You can even find velvets and chenilles and other soft materials suitable for an outdoor marine environment now, so you can really dress it like an interior,” she says. “It’s a very Mediterranean concept.”

Colder climates can equally be allowed for. On the recently refitted 72-metre Damen-built explorer yacht Game Changer, which travels far and wide, the beach club has heating so that it can, in principle, function as a place to sit out even when the boat is in Antarctic or Arctic waters.

These spaces can be equipped for entertainment too. Take the beach club on Severin*s, the 55-metre Baglietto-built superyacht designed by Francesco Paszkowski and launched last year. It has not only a steam shower, but also a 4K-resolution LED wall with an area of about six square metres suitable for video art or screening movies or sports. It’s the creation of audiovisual specialist Videoworks, which also put a retractable 55-inch 4K outdoor television with 180-degree rotation on the yacht’s sundeck that can be viewed either from the lounge or the pool, and a 90-inch cinema screen on the upper deck.

Both Monteleone and Muzio also see beach clubs and decks as opportunities to use bolder colour. “There has to be harmony, and it has to blend with the indoor areas,” says Muzio. “But you can have fun outside. I like to add colour with cushions and towels,” adds Monteleone.

On Olivia, a Russian navy hydrographic survey vessel that was converted into a 69-metre explorer yacht, she used a “very cool” palette of grey, yellow and white on the platform. While on Bold, the 85.3-metre Silveryachts-built expedition yacht designed by her husband, Espen Øino, she chose a vibrant vermilion. Check out the curvaceous armchairs (Smile by Paola Lenti) that stand on the beach club, to which an inflatable platform attaches, so that the yacht’s toys are readily to hand. On Cosmos, which Heesen is due to deliver in 2022, the beach club not only contains a sunken bar but also is sited beneath the seven-metre waterfall-fed glass-bottom pool, so it is lit by sunshine refracted through water.

Launched in 2020 and designed by Luca Dini, 49.7-metre Rossinavi-built LEL is another new yacht with an expansive and versatile beach club, a response to her owner’s brief for “generous open spaces to make the most of the open air and water”. Dini’s solution was to create “an actual terrace overlooking the sea, a pied-à-terre dans l’eau, where nature meets technology”. The partially indoor space, separated from the garage by an automatic door, is spacious enough to store the tender. Lower the side and transom doors and open the louvres, however, and, when furnished, it becomes an elegant and airy room complete with a bar that extends out over the water – the perfect setting for waterside living and entertaining.

For as Muzio notes, clients no longer commission projects with instructions to adhere to “a particular style such as art deco or modern”. What matters more, she says, is their “lifestyle”, how they want to live and where they want to spend time – which tends to be within sight of the sea.