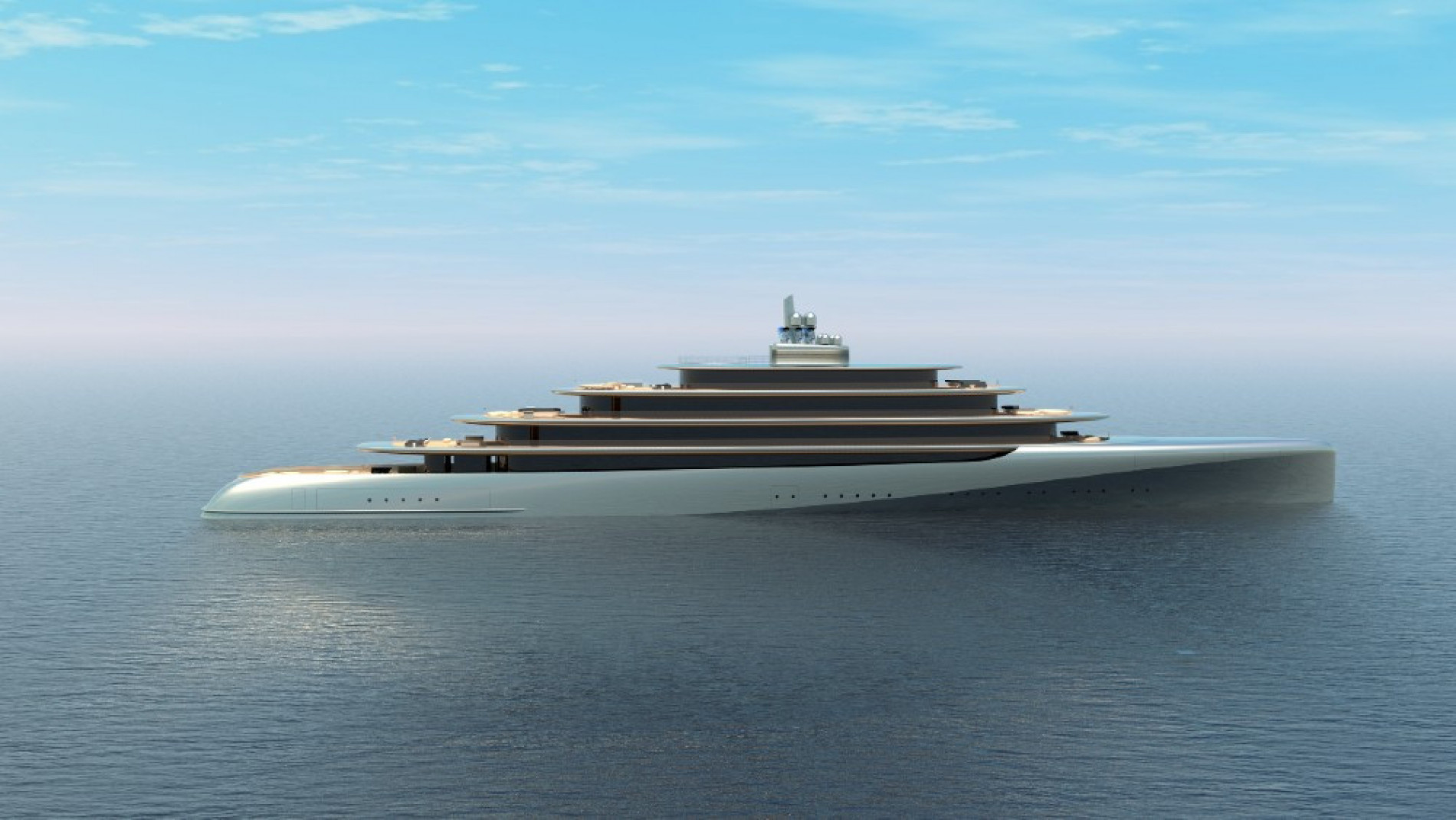 In the height of summer, the most popular anchorages along the Côte D’Azur horizon are dotted with white superyacht silhouettes. But what if, instead of being designed to attract maximum attention, the superyacht blends in with its surroundings? What if it behaved like a chameleon that disguises itself by mimicking the colors around it?

It’s hard to hide any yacht that’s 460 feet long, but the concept “Pebble” does exactly that, with a muted gray superstructure, subtly curved decks and organic shapes.

Designed by Dutch studio Van Geest Design, Pebble was inspired by the smooth surfaces and symmetrical shapes of two stones picked up by studio cofounder Pieter Van Geest. The first the designer found on a beach on the United Kingdom’s south coast; the second appeared a few years later in a riverbed in Indonesia.

The shape of the stones, eroded over time by water, seemed to be the perfect starting point for a new type of yacht.

“It was an exploration into designing with organic curves—an escape from the sharp angles and cubist shapes we encounter in our everyday lives,” Van Geest told Robb Report. “The idea of designing a yacht as though it had been sculpted by nature over decades and then fits seamlessly into its ocean environment appealed to me. It’s totally at odds with what people have come to expect in yacht design.”

The five-deck exterior is defined by large fore and aft overhangs and a closed transom. Both features have been designed with privacy in mind, creating an “invitation only” component. Glass bulwarks and balustrades provide clear views from each deck while sheltering guests from the wind.

“Everything is kept neat and tidy. There are no visible swim ladders, so the smooth pebble exterior remains uninterrupted,” says Van Geest. “It’s becoming more of a trend to achieve enjoyment on deck without being visible. Motor Yacht A had a similar aesthetic. In these times, owners just want to be alone.”

Once anchored and blending with the horizon, the drop-down transom and side-bay beach club transform into a fully open-plan lounge. On top of the dedicated owner’s deck with private aft terrace, Pebble also features multiple swimming pools and a Jacuzzi. The sundeck has a wellness component in keeping with the Zen design. The interior remains a blank canvas, with Van Geest planning to customize it for a specific owner.

The designer originally conceived of Pebble some years for a shipyard, but the idea was never picked up. “I believe it was too advanced for its time,” he says. “As a designer you want to push ideas, but the yachting industry is slow to adapt. There are a lot of conservatively shaped yachts out there.”

Pebble is also designed to travel the world. The boat has a dedicated helideck with its own helipad lobby. “Yacht owners are becoming younger, and they don’t just want to anchor in Corsica for two weeks, especially since Covid,” says Van Geest. “They want to escape and enjoy nature. The boat is capable of heading to wherever, when needed.”

With many new superyacht designs either embracing a quasi-military look or the typical layered-wedding-cake, it’s refreshing to a see a design that aims to become one with its natural surroundings.