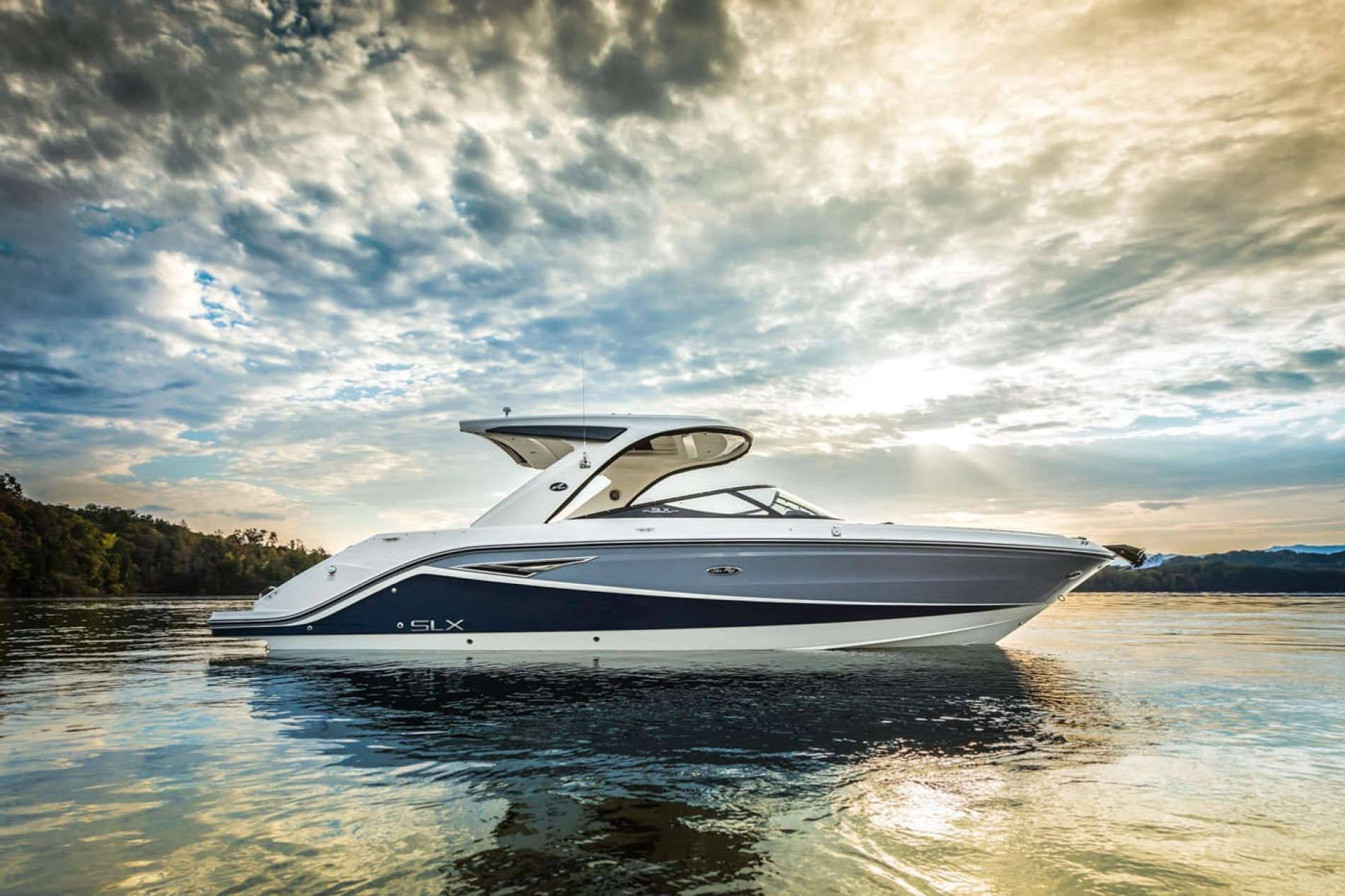 The 260 SLX is an important boat for the "new" Sea Ray. It had to be a standout design for a very crowded field. The designers nailed it.

“We had to sweat over the big things—the proportions, line weights and volumes,” says Carrie Fodor, senior manager of design at Sea Ray Boats, when describing Sea Ray’s new SLX 260. “But I think it’s the women who will notice the added detailing that make the SLX 260 a step above what Sea Ray has done before.”

The new 26-footer, launched last week, was the latest addition to the US brand’s SLX line and incorporated Sea Ray’s new “design language,” which was developed in partnership with BMW Design Works. First used on the Sundancer 370 Outboard cruiser, the intent was to give the brand a sexier, sportscar styling, with a more athletic look. “The new design language includes the flowing S-shaped sheerline, a horizontal hull strikethrough, the pill emblem anchored on the strikethrough, and the lower jawline,” says Kristin McGinnis, the senior industrial designer at Brunswick Boat Group and lead co-designer of the new bowrider. “You can see all of those characteristics on both the SLX 260 and the Sundancer 370.”

But a more interesting backstory to the SLX 260 is that the design team was led by two young women. Fodor and McGinnis worked beside Sea Ray engineers and naval architects, but ultimately were responsible for the final product, down to the smallest detail. “I see the big picture while Kristen has a keen eye for detail,” Fodor told Robb Report. “Together we brought the boat to life.”

The SLX 260 may be a first for the boating industry, which has traditionally had all-male design teams who were creating boats for primarily male buyers. It was often said that the husband in the household chose a boat, but the wife had veto power.

So, Fodor and McGinnis, aware of that fact, had to try to smash through the boating industry’s fiberglass ceiling with a breakthrough design that would appeal to everyone. They couldn’t create a product that was too far out there for a traditional Sea Ray buyer, and had to incorporate the brand’s DNA into the design. But they also had to move the line forward. That balancing act came down to details that the typical boater may not even notice. Big picture and devil in the details may sound like cliches, but were both critical to a design that would serve as the template for the new SLX line, while being a big seller in the highly competitive 23- to 27-foot bowrider segment.

“The biggest challenge for me was separating my own style from what the boat needed to be,” says McGinnis. “It’s always tempting to ‘design for yourself,’ especially a really cool product like SLX, but in the end it’s not about you, it’s about the customer.”

“This was the brand’s first sport boat to illustrate the reinvention of Sea Ray through the new design language, and it was also the first Sea Ray sport boat to come out of the Brunswick Boat Group Technology Center,” adds Fodor. “It was an exciting challenge communicating the vision for the brand and the boat and ensuring that the end product met the expectations of the customer that our vital research process revealed.

Sporting Sea Ray’s classic S-shaped sheer line with a horizontal crease that runs through the center, the SLX 260 now includes a jaw line that sweeps aft for an athletic stance. “We took the features and functions from Sea Ray’s new design language and turned the volume up on innovation,” says Fodor. “To achieve good design, you require universal perspectives. Having that diversity as you go through a project is a big contributing factor to success.”

Women are reported to make up just two percent of the marine industry, but failing to consider the female perspective is a mistake, says Fodor: “Even when it’s not the woman purchasing the boat, she is usually the ultimate decision maker or at the very least the main influencer. And more women are buying boats, which makes the female perspective an important aspect to include.”

The “female perspective” comes through in innovative functional details such as an extra 24 cubic feet of space and storage, including a dedicated portside transom storage for inflatables, and an integrated cooler or storage space under the enlarged transom sunpad. A 26-foot bowrider has very limited space to work with, so these details were critical to differentiating it from competitors’ models.

“Making the sunpad four or five inches bigger means it’s now large enough to actually lie down on to sunbathe,” McGinnis says. “It’s complemented by the boat’s retractable shade and exemplifies the types of details that consider a female audience.”

The team also relied on ergonomic studies to find the optimum seat depth for all users, rather than rely on the standard dimensions that have been used for years. The result is deeper seats, with L-shaped bench seating, as well as a swivel and slide helm seat and companion seats with bolsters.

“The bones of the existing SLX were really good, so the challenge for us was how to make lots of little improvements without ramping up costs,” says Fodor.

They managed to add a luxury look by giving the boat the highest trim vinyls found on an SLX, the most upholstery stitching and acrylic, and thicker foam seating. Concealed or integrated mechanics, such as the phone induction charger on the helm also illustrates how functionality was blended with high style. Among the new technologies is a Dual Digital with 9-inch Simrad touchscreen displays. The boat also has what Sea Ray calls a “Dynamic Running Surface” for stability and performance.

There’s also an optional “power tower” that extends sunshade via zipped T-tops. It raises and lowers with the push of a button. It can be upgraded with Fusion speakers and color-changing lighting.

“The power tower is one of my favorite existing details—I love the way it folds down to the windshield,” says McGinnis. “But when folded it required a four-bar structure on the tower leg to get it to fold flat. We worked hard with engineering to have that deleted, so now it’s a super simple, elegant two-leg tower form.”

Both women entered the world of design with automotive interests in mind and ended up in marine. That gave them a contemporary perspective that extended beyond boating, something that is often lacking in yacht design. The good news is that McGinnis and Fodor are currently working on other Sea Ray projects, so their influences will continue to be felt in the new Sea Ray design language.