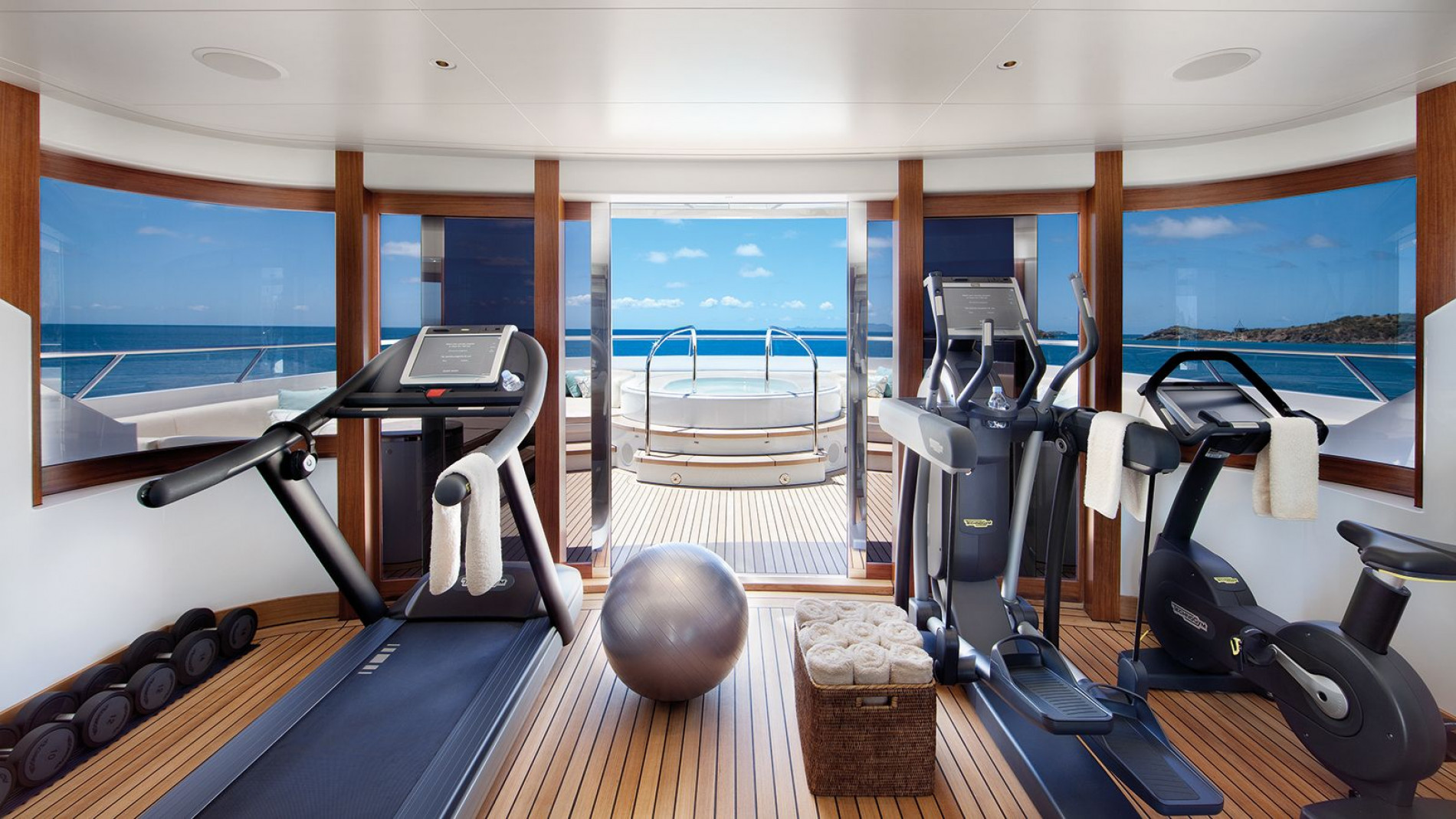 ON-THE-WATER WORKOUTS: HOW TO DESIGN A SUPERYACHT GYM

Where to put it? How big to make it? What to put in it? Cecile Gauert puts the experts through their paces to discover how to create onboard exercise heaven

A gymnasium on board a yacht used to be the preserve of a select few, and were always found down below. One of the first yachts known to have had a gym was Lürssen’s Coral Ocean (launched as Coral Island in 1994). Designed by Jon Bannenberg, the gym was connected to a spa with sauna and was accessible from the guest cabins on the lower deck. Less than five years later, gyms had become a “thing”.

Espen Øino recalls that the first yachts for which he had to design gyms were Skat (launched in 2002) and Octopus (2003). “But everyone has a gym now,” he notes. Naval architect Gregory C Marshall says: “We started seeing gyms on a major scale right around 2000. And by then gyms had moved to the prime real estate up top.” Dan Lenard believes that the first yacht to adopt this configuration was the 59.4 metre Palmer Johnson known at the time of her 1998 delivery as La Baronessa (now Pearl). Nuvolari Lenard was the yacht’s designer inside and out. The enclosed gymnasium was carved out of the sundeck and connected to a private spa pool and sunloungers. By the time the Oceanco Alfa Nero launched, in 2007, another Nuvolari Lenard design, the gym was more frequently a prominent space benefiting from floor-to-ceiling windows.

These days, the top deck has become a favourite location for the gym, with the lower deck/beach club area a close second. The owner of Cloudbreak, an explorer yacht built around wellness, chose the lower deck for the complete gymnasium, adjacent to a sauna. At anchor, shell doors and a large transom door open up the Space to the outside world. The idea here is to fulfil the fantasy of plunging into the ocean after an invigorating workout, says Øino, who did the exterior design and space planning for the 72.5 metre yacht built at Abeking & Rasmussen. He and interior design firm Christian Liaigre had a hand in the gym’s design but the owner personally chose the equipment, including the centrepiece – a set of ropes for inversion exercises. The headroom was a challenge, according to the yard’s project manager, even if the floor was lowered and the yard had to try its best to minimise the overhead space dedicated to cables and pipes.

Sufficient height is the No. 1 issue for an onboard gym, says Edward Thomas, founder of Gym Marine Yachts & Interiors, but that challenge has been overcome in most yachts. “Everyone seems to want one now,” he says. “We get a lot of enquiries on refit projects of older boats because it makes them more attractive to charter clients. We are working now on converting a library into a gym.”

The “feature gym”, as he calls it, is generally found on very large yachts – 80 metres and more. A notable exception is Alloy Yachts’ VvS1 (now Akiko), designed by Gregory C Marshall and delivered in 2007. The gym was located in what’s traditionally used as the upper saloon, aft of the bridge. The space was finished with floors and cabinets that match the rest of the interior so it could revert to a lounge area once the equipment is whisked away but “most of the time it’s being used as a gym”, says Marshall. He has reprised the idea for another custom project, in which the beach club area is finished as interior space with panels designed to conceal the equipment.

No attempt is made to hide the gym that occupies the upper deck on the 38.1 metre Benetti Iron Man (now Falcon II); quite the opposite, in fact. The yacht’s owners are on the younger side and very fit, so “wanted the atmosphere of wellness around them”, says their interior designer, Alfred Karram Jr. Known as a spatial innovator with his residential interiors, Karram made a radical choice that raised a few eyebrows. “Taking the entire upper deck really makes a statement,” he says. The combination of modern aesthetic and modern technology has delighted the owners. A frosted curved glass panel, lit from top to bottom that conceals the entrance to the wheelhouse, is an eye-catching feature at night. Karram worked with a light designer to showcase the equipment by Technogym, whose modern aesthetic fit the bill perfectly. The gym’s floor is a rubber material, edgy and helpful for sound-proofing, while the walls feature an exotic veneer installed horizontally.

How much space there will be for a gym “really depends on the owner’s priorities”, says Øino. It was a big priority for the original owner of the Nauta-designed 27 metre explorer built by Cantiere delle Marche in 2014. He decided to dedicate one guest cabin to a well-equipped gym with a sauna/shower to keep up with his daily regimen. What he named his yacht says it all – Yolo. Now renamed Rosey, the gym has been converted into a cabin by the second owner, who prefers to do his exercising on the flybridge. In fact, using a cabin as a gym is becoming rarer, says Marshall, especially on custom yachts.

What a gym looks like is really up to the owner’s imagination. Designer Alberto Mancini is working on a new yacht for Overmarine and an owner who’s decided to feature fitness first and foremost. The lower deck’s elaborate gym is to be fitted with Technogym equipment and a Ciclotte carbon-fibre exercise bike.  The manufacturer also builds a stylish and compact monocycle in stainless steel, treated to be more resistant to sea air. An outdoor bike (or two) may end up on the outer deck as well to provide riders with the illusion that they are moving the yacht as they pedal. Outdoor equipment needs constant upkeep and frequent replacement, says Thomas, who likes climate-controlled spaces primarily for this reason. Plus, a fixed interior gym can be a cohesive and beautiful space. To complement a statement piece or two, designers now have a panoply of options, from custom colours to personalised equipment with engraved logos. He is particularly pleased with a refit he has just completed. “[The gym] has lots of light and equipment with polished aluminium and chrome; it’s really smart, with the latest apps and touchscreens.  We custom manufactured a cabinet to hold the dumbbells, finished in the same matt finish as the rest of the space.”

As always, in a custom world, aside from budget, limits are few. However, designing a gym for private use requires a different mindset to designing one for a charter yacht. “When you do a gym for a charter boat, you don’t want to have too many niche products. It’s like a hotel, you don’t know who is going to turn up,” Thomas says. It’s probably best to keep to the basics: treadmills, stationary bikes and some sort of multifunctional pulley apparatus – he recommends Cybex’s Bravo trainer, which includes 140 exercises. Since headroom is at a premium, an excellent option (for any yacht) is a rowing machine. He particularly likes the WaterRower for its style and simplicity. It comes in wood and other finishes and can be stored in a locker. An interesting option for a fitness-specific charter is to rent fitness apparatus, and Gym Marine Yachts & Interiors provides such a service. “We will send the equipment and you can use it for a couple of weeks. We did it on a famous charter boat, which had Hollywood stars on board. We sent ropes, sandbags, etc, which they used with the special trainer they had on board.” A crew gym is also increasingly on owners’ radars, although that can be even more challenging given the location of crew quarters on the lower deck. But it’s a plus any crew will appreciate and will help their longevity in the job.

The rapid evolution of screens, sound delivery and the internet will open up even more options for gyms. Why look down on a small screen, from a poor ergonomic position, when an image can be projected on to a big screen or a wall? “One thing that is quite exciting is virtual reality. How the fitness industry will take that on will be very interesting,” says Thomas, pointing out that already several machines on the market come with programmes for immersive experiences. Someday soon you could conceivably cycle on an Alpine road unfolding on a glass panel in front of you while anchored in the Caribbean, or take on a cross country run from the comfort of your beach club.