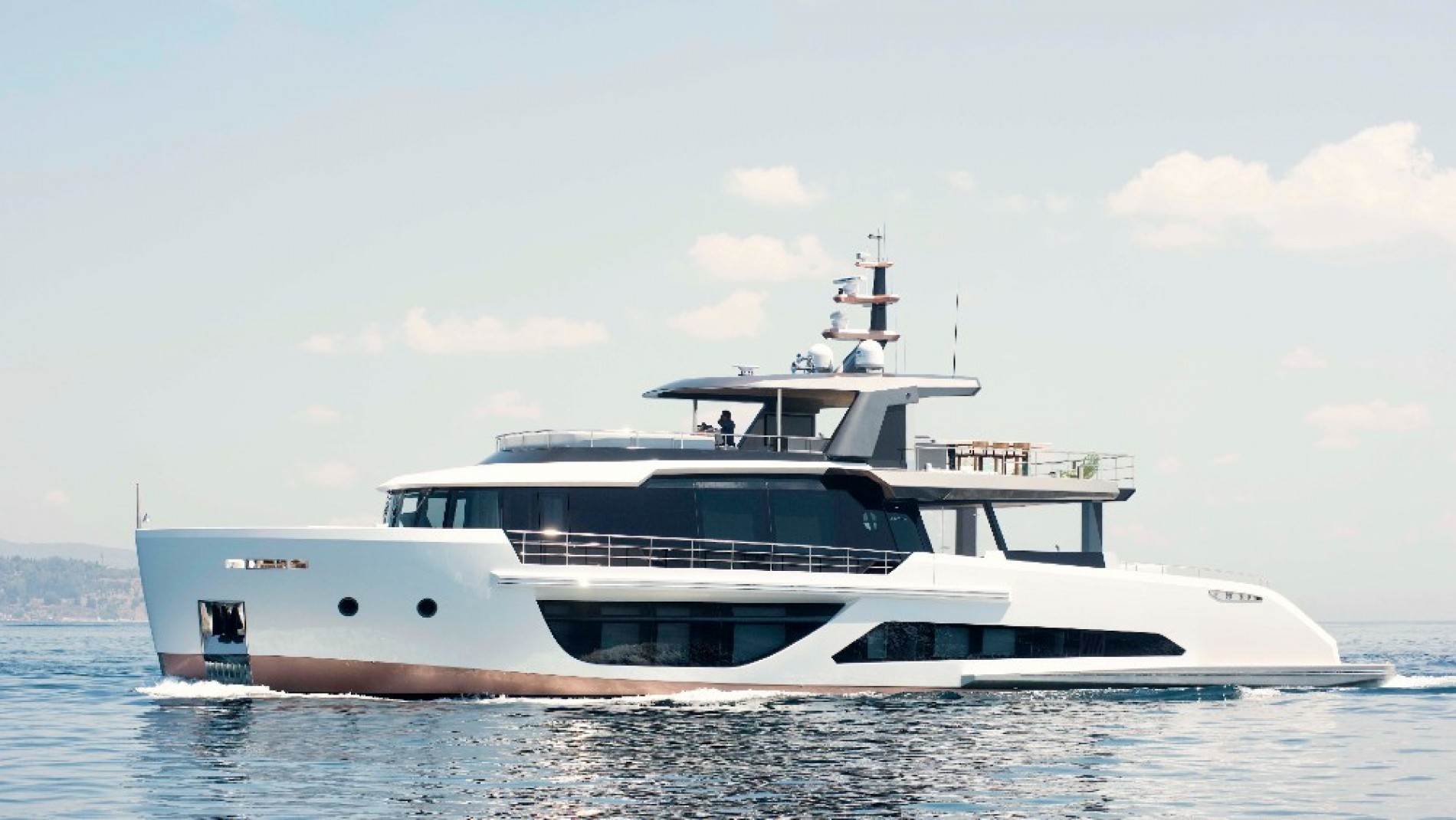 Calling itself the “largest boat and yacht show in the world,” Miami’s boating extravaganza starts on Wednesday and runs through Sunday. After being cancelled last year, it’s now back with a new name and expanded footprint:  The Discover Boating Miami International Boat Show. It now has six locations, rather than four, including the Sea Isle Marina where over 150 vessels are available for sea trials, superyachts at Island Gardens marina, and hundreds of smaller production boats will return to the Miami Beach Convention Center for the first time in five years. Here are nine newcomers, both global launches and first-timers to Miami, that give a sense of the revitalized show.

This 102-foot pocket-superyacht from young Turkish yard Alpha Custom Yachts was all set to be shown in Miami as a brand-new boat. But days before the end of 2021, an American buyer snapped-up the $13.4 million triple-decker and named her Vivace. Instead of sailing off into the sunset, the Spritz 102 will still debut at the Miami Show, but this time as a $95,000-a-week. Designed by Italian Giorgio Cassetta, this bold, party-friendly cruiser with its multitude of entertaining spaces, offers beds for 12 in five cabins. With twin 1,100-hp Cats, it has a 16-mph top speed and a 2,500-mile range.

To showcase the finest of Dutch boat-building skills, superyacht builder Amels and its workboat division Damen, will be bringing two examples of their handiwork to this year’s Miami show. The connection between the 180-foot Amels Gene Machine and the rugged 182-foot Damen YS 5009 support yacht Gene Chaser is leading American scientist, inventor and biotech billionaire Dr. Jonathan Rothberg who, conveniently, owns both. Best known for his contributions to next-generation DNA sequencing, Rothberg plans to travel the globe with both yachts, in an effort to address what he calls “our biggest global challenges.”

US buyers will finally get a chance to kick the fenders of Ferretti Yachts’ sleek, new 50-foot flybridge cruiser, the FY500. Designed by the talented Filippo Salvetti, this big-windowed, though rather traditionally-styled newcomer, comes with such big-yacht features as dual staircases leading up from the swim platform, plus an oversized, family-friendly cockpit table that can seat up to 10. Inside, there’s a choice of “classic” or “contemporary” interior designs, with beds for six in three cabins, including a lovely full-beam master. A pair of muscly 550-hp Cummins QSB 6.7 turbo diesels should deliver a top speed of 35 mph with easy cruising at 29 mph.

When it comes to Azimut Flybridge models, there are more choices than any other builder. Looking for something in the 50-foot range? Take your pick from the 50, 53 or 55. For 60 footers, there’s the 60 and 66. Above those, a 72, 78 and 83. Now filling the slender gap between the 66 and 72 comes the gorgeous Azimut 68 Fly that’s making its North American debut. Alberto Mancini and Achille Salvagni did the exterior and interior designs, respectively, giving the boats plenty of Italian glamor inside and out. But there’s substance with all this style: That cool hardtop with its opening sunroof is made of carbon fiber to shave weight and lower the center of gravity. And full marks for the bright-and-airy, wide-open salon with its towering 6’6” of headroom.

Legendary Italian builder Cranchi, which has been around since 1870, is jumping into the booming fast-dayboat market with this sleek A46 Luxury Tender. From the drawing board of designer Christian Grande, this high-sided, plumb-bowed 46-footer is all about soaking up rays, with its acres of sunpads and clever, fold-down side “wings” that extend the width of the cockpit. For overnighting, there’s a beautifully finished open-plan cabin with two singles and a forward dinette that morphs into a double. Power comes from a pair of 480-hp Volvo diesels coupled to IPS pod drives that can punch the A46 to a top speed of 40 mph.

It’s all in the details. In the case of the TT460 from Italian builder Invictus, it’s the stunning stainless windshield surround, or the shiny belt buckles holding down the sunpad cushions, or the exquisite perforated stainless grilles of the Invictus-branded outdoor speakers. Yet another head-spinning design from the prolific pencil of Christian Grande—his Cranchi A46 is also debuting at Miami—this new Invictus is distinguished by its gorgeous, wave-shaped T-top and elegant, reverse sheer bow. Powered, drop-down side sections expand the width of the cockpit dining area, while twin 480-hp Volvos with IPS pod drives provide the power and 41-mph top speed.

Party boats don’t come more playful than this new 53-foot, lightweight aluminum VQ52 center cockpit from Dutch builder Vanquish Yachts. While it was unveiled at the Cannes boat show last fall—in a retina-searing shade of electric orange—this latest addition to Vanquish’s fast-evolving VQ line-up is making its US debut in Miami. Available in open, T-top or hard-top guises, what doesn’t change are the multitude of sunpads and chill spaces for a crowd of up to 18. Engine choices range from twin 600-hp Volvos with IPS pods to twin 1,200-hp MANs and rooster-tailing surface drives.

Making its US debut in Miami, Pardo’s new flagship is an unusually versatile boat. The four-cabin interior includes a large main salon, a full-beam stateroom and plenty of natural light throughout. With the E standing for Endurance, the new Italian cruiser is powered by twin 700-hp Volvo Penta engines with IPS drives. The vertical bow is designed for rough water, while the rear half is all about enjoying the great outdoors. The large aft section on the main deck and open upper deck, plus foldout sides at the stern, give the 60 exceptional open space. Because it can be buttoned down for rough weather or opened for use in the sun, the newest Pardo will do well as a multi-season cruiser.

The booming power catamaran market is getting a key addition with Leopard’s brand-new 46 Powercat. Making its global debut in Miami, this 46 is important because it’ll soon be joining the Moorings’ global charter fleet, badged as the Moorings 464PC. Built in South Africa by cat specialist, Robertson & Caine, this new 46PC comes with a sprawling 24-foot beam that provides condo-sized interior space. Owner versions will likely have three-stateroom accommodations, with one entire hull being dedicated to a spacious master suite. Twin 250-hp Yanmars will give a zippy 24-mph top speed, while big fuel tanks and the efficient hulls will deliver an impressive 1,600 nautical miles.