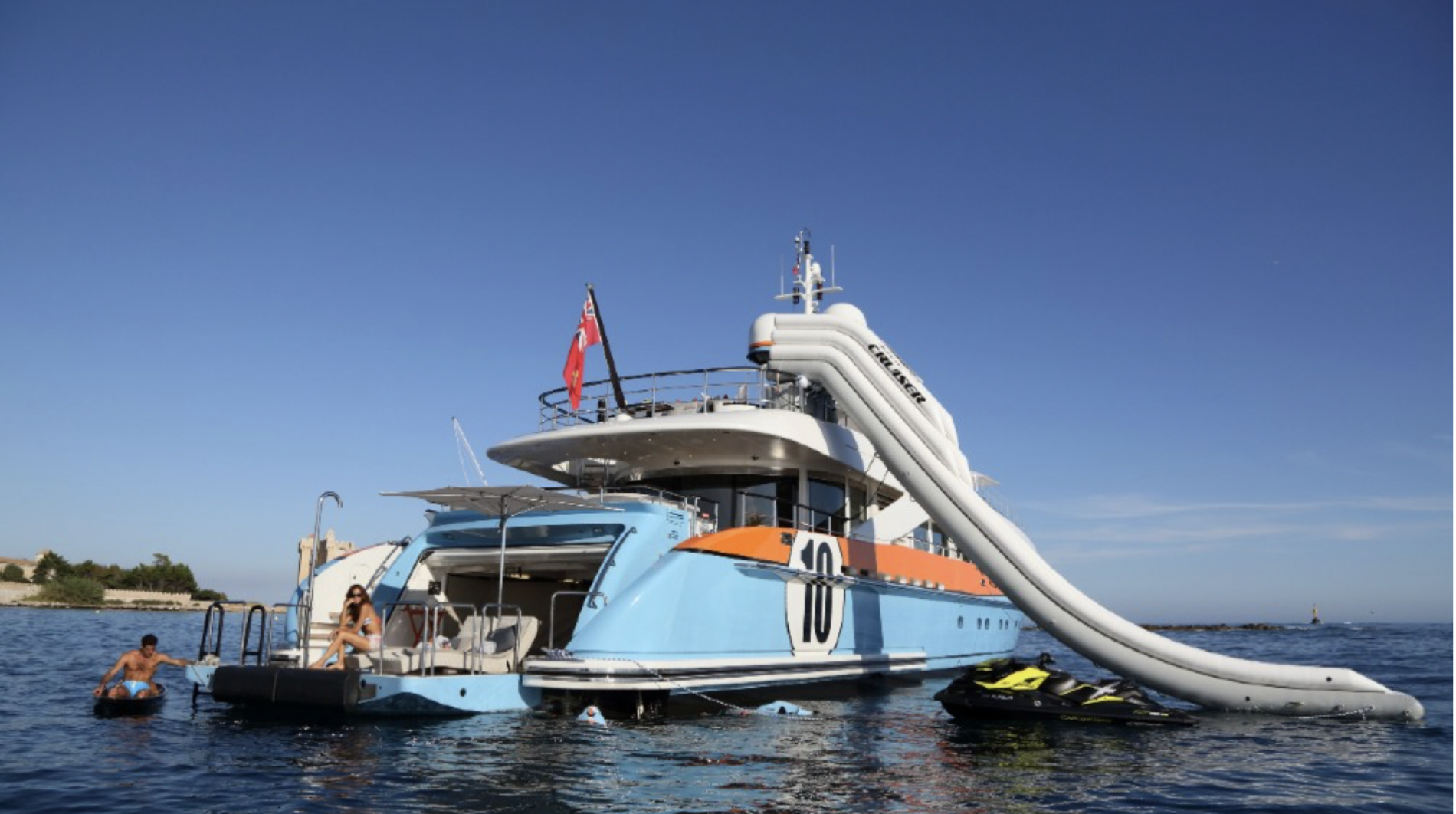 BOAT OF THE WEEK: THIS 122-FOOT SUPERYACHT IS A SEAFARING TRIBUTE TO THE GOLDEN ERA OF GT RACING.

The exterior of "Aurelia" was inspired by Steve McQueen's "Le Mans" racer while the cabins have Ferrari, Lamborghini and Aston Martin motifs.

The same legendary Gulf Oils livery also adorned the hugely successful Ford GT40 race cars of the late ’60s, while today, you can even specify these head-spinning colors on the latest $500,000 Ford GT supercar.

Back in 2011, the sports-car-loving owner of a soon-to-be-delivered 122-foot, Dutch-built Heessen superyacht decided that instead of typical refrigerator-white paint, he’d go bold. Very bold.

“The whole boat, inside and out, is a nod to the history of GT motorcar racing,” says Captain Guy Booth, Aurelia’s former captain who is now project-managing the 192-foot Royal Huisman superyacht Phi. “The owner wanted a tribute to speed, a tribute to history.”

Some might argue the owner—who, according to Booth, is equally passionate about horse racing—got a little carried away with the polarizing color scheme. The yacht’s custom 30-foot Pascoe tender—with its Yanmar powerplant is capable of around 60 mph—along with its fleet of Sea-Doos and Seabobs, are all painted to match the mothership.

Even the name of the yacht has a sports car connection. Aurelia is the name of arguably the world’s first Grand Tourer, the sexy, Italian-built Lancia Aurelia GT fastback, introduced in 1950.

“Aurelia is the ocean’s answer to a classic racing car,” says Jan Jaap Minnema, broker with Fraser Yachts, who currently has the sleek, all-aluminum superyacht listed with a €8.9 million—or around $10.4 million— asking price.

Naturally, for a superyacht dressed-up in racecar colors, it had to be speedy. Powered by twin German-made MTU 3,648-horsepower V-16 diesels, Aurelia has a wave-slicing top speed of 36 mph. Throttle back to its 18 mph cruise speed and the yacht can cover over 2,300 miles between fill-ups.

Step aboard and Aurelia’s Bannenberg & Rowell-designed interior continues the sports car-inspired concept, though in a slightly less flashy way. Look closely and you’ll see the elegant carpeting throughout features a subtle pattern designed to resemble the tire treads of vintage racecars.

Gaze up and the ceiling in the salon is lined with diamond-quilted leather inspired by the seats of high-luxe Bentleys. And you can kick-back in gorgeous, bright-green leather armchairs from the Linley Aston Martin Collection.

Guests can also have fun taking their pick from three sports car-themed cabins. There’s the Ferrari-red cabin with its eye-popping red-and-black bed covers and Ferrari art; the Lamborghini-themed cabin with splashes of orange; and the elegant Aston Martin cabin with green hues and paintings of custom Zagato-bodied Astons.

Even opening the door to each cabin makes you feel like you’re driving a racecar; the handles feature the knurled surface of a vintage racer’s gear shift. “You could spend three or four days on the boat and still not see all of the very subtle tributes to GT motorcars,” says Booth.

On a side note, the Porsche that Steve McQueen drove in Le Mans—Chassis 026—is going on auction this weekend at RM Sotheby’s 2021 Monterey event. It’s expected to fetch over $18 million. It has a solid racing history and was one of three cars entered by JW Automotive at the 1970 24 Hours of Le Mans. The car hydroplaned and crashed on the 50th lap, but was used to make the movie, which recreated much of the actual race.

As for that standout “10,” set in a white circle on Aurelia’s rear topsides, surprisingly it has no motor racing connection. It comes from the yacht being hull number 10 at the time, as part of Heesen’s successful 37-meter series.

Of course, you could argue that with its head-turning style and surprise-and-delight interior, Aurelia is nothing less than a “10.”