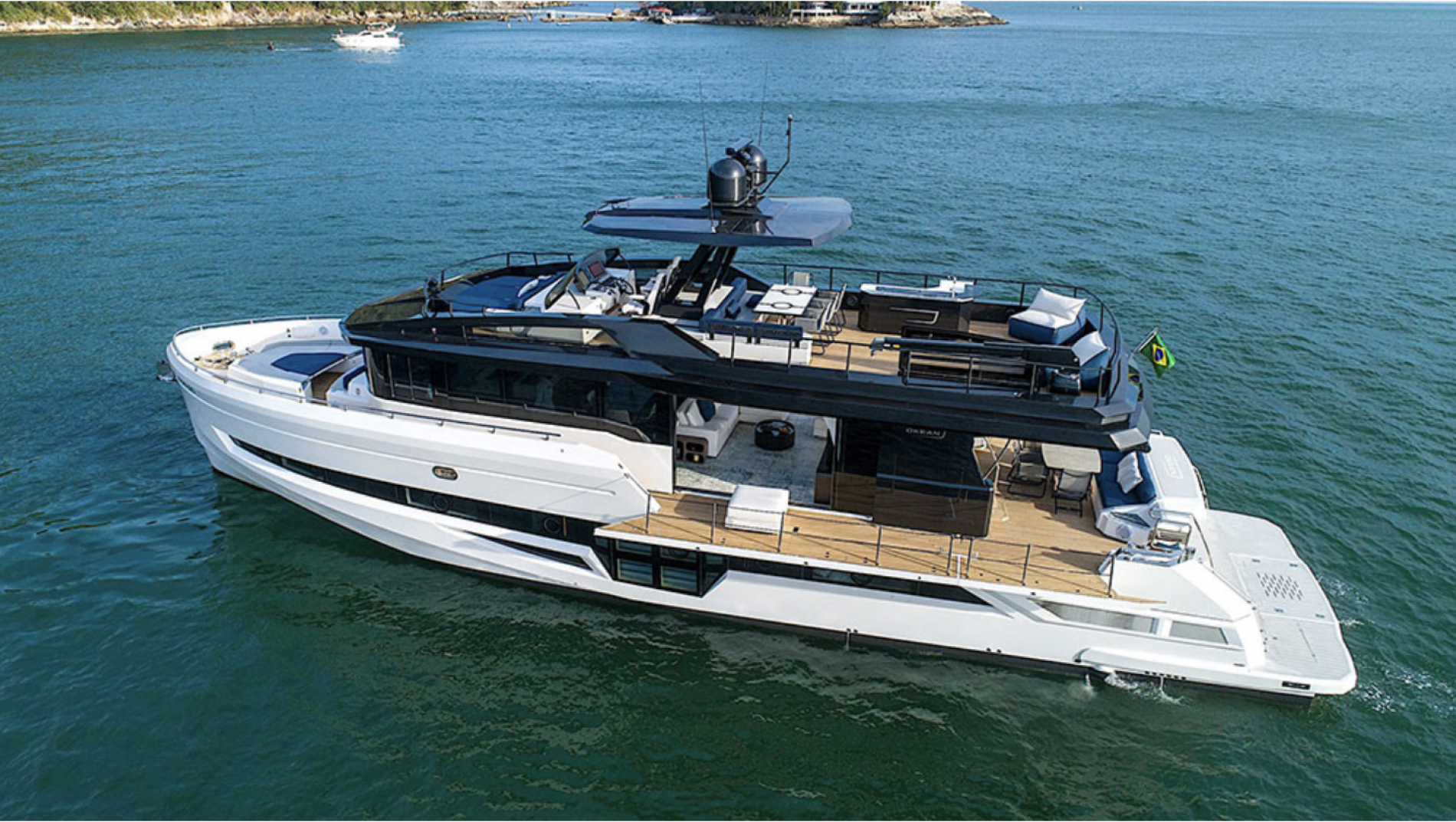 BOAT OF THE WEEK: THIS 80-FOOT MINI-SUPERYACHT HAS TRANSFORMER-LIKE FOLD-DOWN TERRACES AND DECKS.

Buttoned up, Okean's 80 Fly looks like a contemporary explorer. At anchor, it's the ultimate transformer, opening across multiple levels.

Think of the new, Brazilian-built Okean 80 Fly as a cross between a Swiss Army knife and that Bumblebee robot from the Transformers movie franchise. At the press of a button, wing-like sections of the yacht’s hull fold down on both sides, adding over six feet to the yacht’s 19’10” beam, and creating wide terraces for sunning or sunset cocktails.

Another button levitates a large section of the lower stern deck, transforming it into a high-diving board, in-water swim platform, or tender lift. Okean worked with Italian hydraulics experts Opacmare to integrate their aptly named Transformer multi-function platform system into the yacht.

One more button raises a near full-width section of the transom to reveal a cozy beach club hidden away behind it. That high-lifting section of hull provides welcome shade for the built-in sofa.

“We really wanted to create a yacht with real flexibility and versatility; one that allows those aboard to feel truly connected to the water,” Paolo Ferragni, Okean lead designer and head of the Cremona, Italy-based studio, Ferragni Progetti, told Robb Report.

Launched late last year, and making its U.S. show debut at the recent Fort Lauderdale International Boat Show, the Okean 80 Fly is the newest flagship of this young Brazilian builder. It joins the smaller, mini-me Okean 50, and the go-fast Okean 55 dayboat.

Complementing those fold-down “wings” is a main deck salon that showcases true indoor/outdoor living. Huge, floor-to-ceiling, sliding-glass doors open to let fresh air in, with equally expansive doors at the rear of the salon that open on to the large rear deck. “It is a magical feeling when you are relaxing on a sofa in the main salon, with both side doors and the rear doors fully open. It’s as if you are floating on the water,” explains Ferragni.

There’s no shortage of places to stretch out and relax. On the foredeck there’s a large U-shaped built-in sofa, while the covered aft deck features a dining table for six. Take the steps up to the vast flybridge and there’s a sun pad in front of the helm, another dining table behind and a full outdoor L-shaped kitchen.

To deliver full 360-degree visibility throughout the salon, the designer created tall, vertical, wraparound windows with slender, almost invisible mullions so as not to affect the view out. It’s the same story below decks. Ferragni created almost bow-to-stern windows set into the hull to flood the cabins with light.

His favorite element of the design? That funky quartet of windows in the full-width master cabin, flanked by smaller triangle-shaped glass. Viewed from outside, it looks as if the windows are almost touching the water.

Below decks there’s accommodation for eight guests in four spacious cabins, plus room for two crew.

The semi-displacement hull has so-called Dual Mode architecture that lets the 79-footer cruise at 12- to 14-mph displacement speeds with good fuel efficiency, yet climb close to 30 mph when the owner wants to get somewhere in a hurry. Powering the Okean are two 1,550-hp MAN turbodiesels. With 1,518 gallons of fuel aboard, the 80 can cover around 300 miles at 21 mph.

While the Fort Lauderdale 80 Fly show boat was hull number one, two more are currently under construction.”Interestingly, both owners of these new 80s have requested a fully enclosed pilothouse, rather than an open flybridge,” he says. “It is all about flexibility and versatility. Plus the appeal of air conditioning.”