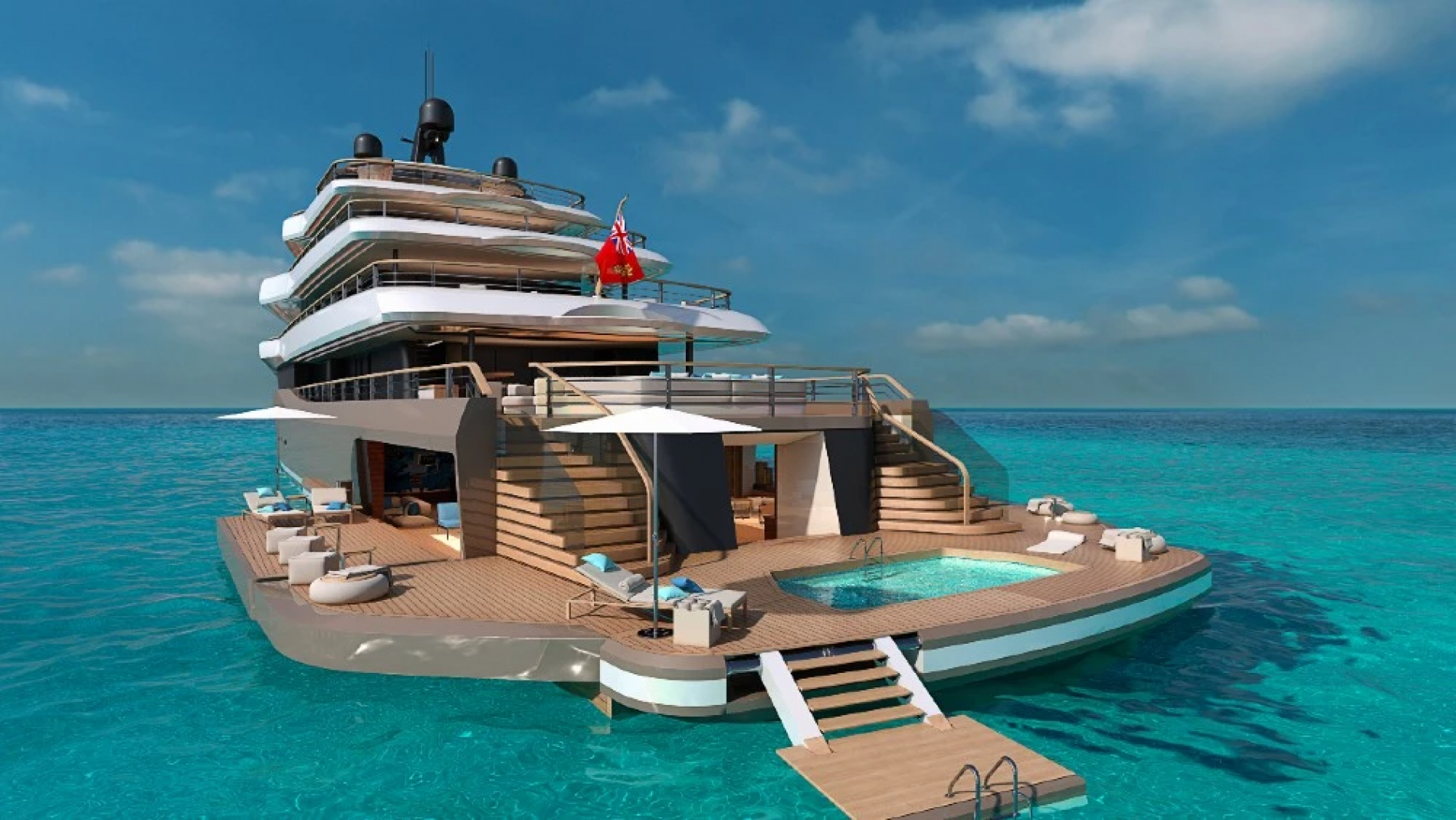 BOAT OF THE WEEK: THIS NEW 235-FOOT SUPERYACHT HAS FOLD-DOWN TERRACES TO CREATE A BONKERS BEACH CLUB

If you like a lot of beach club with your yacht, the Moonflower 72’s expandable aft deck will have you reaching for your swim trunks at first glance. With two folding bulwark terraces, a sunken sea-water pool, stepped access to the ocean and a walkaround, 1,200-square-foot platform named “The Island,” Nauta Design’s patented offering raises the bar for outdoor living with a healthy serving of Italian flair.

“The beach club links several areas that are normally more separated, transforming the whole aft part of the yacht into a ‘pieds dans l’eau’ interconnected social hub,” Mario Pedol, co-founder of Nauta Design, told Robb Report. “It helps to connect guests to the sea, which is evident on smaller yachts but normally more of an issue on a large superyacht.”

Milan-based Nauta Design first penned the 235-foot Moonflower concept in 2018 for an owner looking for a flexible layout that was open to the elements. The steel hull has a  displacement running surface, with a tiered aluminum superstructure, and helipad on the bow. All that pleased the owner, but the decision was made to put the build on hold. Following a design review at the start of this year, construction began at the Wider shipyard in June.

The Moonflower 72 touches other trends popular with today’s owners, such as a heavy use of glass for an indoor-outdoor connection, a private “cozy nest” forward on the main deck, and the inclusion of new technology to streamline life on board. Key to this is an artificial-intelligence system that will study the habits of the owner, guests and crew to attune onboard amenities to their routines, thus reducing energy consumption.

“The system detects human presence, so if a cabin is empty, the lights go out and the AC automatically switches off,” Marcello Maggi, president of Wider Yachts, told Robb Report. “It saves as much energy as possible to maximize onboard efficiency.”

The use of innovative tech has been Wider’s calling card since the brand launched in 2010. Its premier model, the Wider 42, started the expandable deck craze that has become so popular with just about every size of yacht, from 25-footers to gigayachts. The 42 also had a cool-looking space for a jet ski at the stern, and forward, a cabin for weekend trips. Launched a few years later, the Wider 150 was the company’s next breakthrough design. Like the 42, it was ahead of its time, with hybrid power, full-height doors and panels that mixed indoor and outdoor spaces. A combo saltwater pool/tender garage in the lower beach club area was a masterful way to transport the tender when running, or take a quick dip when at an anchor.

Wider’s new flagship Moonflower is an entirely different animal than its previous yachts. Maggi acquired the company in 2019, and his current business plan includes increasing the range and, with it, annual production.

It has to be said that both generations of wider owners have an interesting take on pools. Moonflower’s on-deck pool features a hydraulic mechanism that raises the teak bottom flush with the deck when the pool is not in use.

The yacht also has Wider’s hybrid propulsion system, with two variable-speed generators, a sodium-nickel battery bank and an energy recovery unit. “The hybrid system takes power from both the battery pack and the diesel generators independently, which is different to a system in which the power is only taken from a diesel generator and goes directly to an electric engine,” says Maggi. “Less consumption, less pollution, lower costs, less maintenance and a significant reduction in noise and vibration—these are the main benefits of our system, together with the freedom to cruise in protected natural areas.”

The Ancona builder has staked its brand reputation on moving towards sustainable, all-electric yachts. Unlike the one-off hybrid propulsion found in custom yards, Wider plans to take a serial production approach to electric power with all of its yachts. Besides the 150, it also some eclectic designs like the Widercat 92 catamaran (which has another foldout beach area) and the more conventional Wider 165 superyacht. Other, larger designs are in the pipeline. Once technology catches up, says Maggi, Wider’s aim and mission is to provide 100-percent electric power.

For now, Moonflower will also be built with state-of-the-art sustainability. Pedol says “sustainable and maybe even vegan materials” will be incorporated into the interior design, though the company has yet to release any images. The Moonflower 72 is scheduled for delivery in summer 2025.