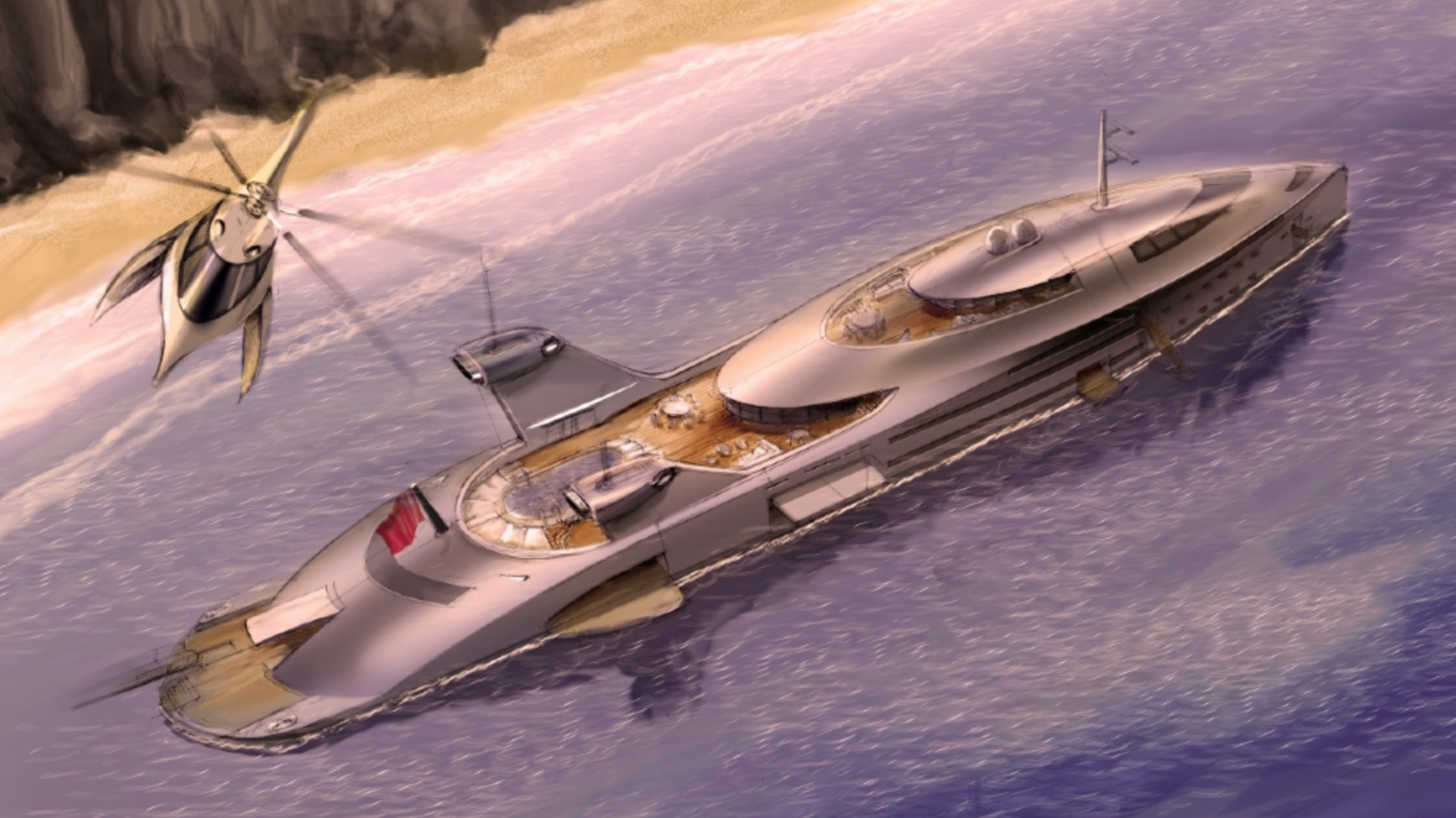 One man’s trash is another man’s treasure, the saying goes, and that is doubly true for one of the most unexpected casualties of the pandemic: jumbo-jet engines. Qantas, British Airways, Virgin Atlantic and Air France were all forced to decommission jumbo jets after Covid-19 killed international air travel. Once considered queens of the sky, these mighty jets now reside in aircraft graveyards.

Designer Uros Pavasovic is proposing a highly creative way to repurpose them—as powerplants for a 427-foot gigayacht that resembles a luxury vessel from the apocalypse. “The Cobra concept came from pandemic-related news on the early retirement of jumbo jet fleets,” Pavasovic told Robb Report. “With all those discarded airplanes and functioning jet engines, it made perfect sense to re-use them in a Mad Max-style, post-pandemic world which felt, at the time, like the future we were heading towards.”

The concept features giant 15,000 hp repurposed jet engines on the upper shell that will be used to power electric generators. This multi-type propulsion platform could prove highly efficient, according to the yacht designer, even if it’s just theoretical. “It pushes our understanding of design parameters, but it’s buildable,” says Pavasovic. “It might look like science fiction, but it’s not fantasy. The only problematic element is that those engines would be loud.” But the noise could be mitigated during the build process.

Pavasovic is not just some random sci-fi fan, drawing fantasy yacht concepts. Before launching his own studio last year, he spent years as a designer for both Winch Design and Terence Disdale Design, two of the most famous studios in yachting. He incorporated all the amenities one would expect on a 427-foot gigayacht, including a large swim platform, a main deck with pool, a supersized beach club and tender garage with folding platforms, and, of course, enough room for dining, lounging and entertaining.

“While a yacht with loud, exposed jet engines may not appeal to a real-world yacht owner, only a few modifications, such as the relocation of the turbines to the engine room, will transform it into a realistic yacht proposal for an owner who wants to stand out,” says Pavasovic. “The design also allows for the airplane-inspired aft vertical wings that carry the exposed engines to serve as masts for communication and navigation equipment.”

The Cobra design was also inspired by “ekranoplans,” or ground-effect vehicles (GEV) from the Soviet era—in particular, the 1970s KM, nicknamed the “Caspian Sea Monster” because of its stacked engines and fearsome size. It was designed to basically glide at incredible speeds over sea waves and then fire missiles at enemy warships. At one point, Pentagon officials worried that these airborne water vehicles would be able to destroy American aircraft carriers.

“The KM featured stacks of jet engines mounted on its wings to create thrust and an air cushion on which the ekranoplan glides just a few feet above the water’s surface,” says Pavasovic. “It was a true goliath at 300 feet in length, weighing over 500 tons. Capable of reaching speeds of 400 mph, it had a very imposing presence.”

Minus the missiles, the ground-effect technology has been incorporated into Cobra’s 25-foot tender. The five-seater has features that echo the mothership. This mini-me Cobra is designed to transport guests at high speed and in high style. Pavasovic also penned a custom helicopter that can land on water and be hoisted onto the mothership, eliminating the need for a helipad.

While the helicopter is probably decades away from reality, the technology to build the Cobra and baby Cobra is available. It’d certainly be the most stylish superyacht in the next apocalypse.