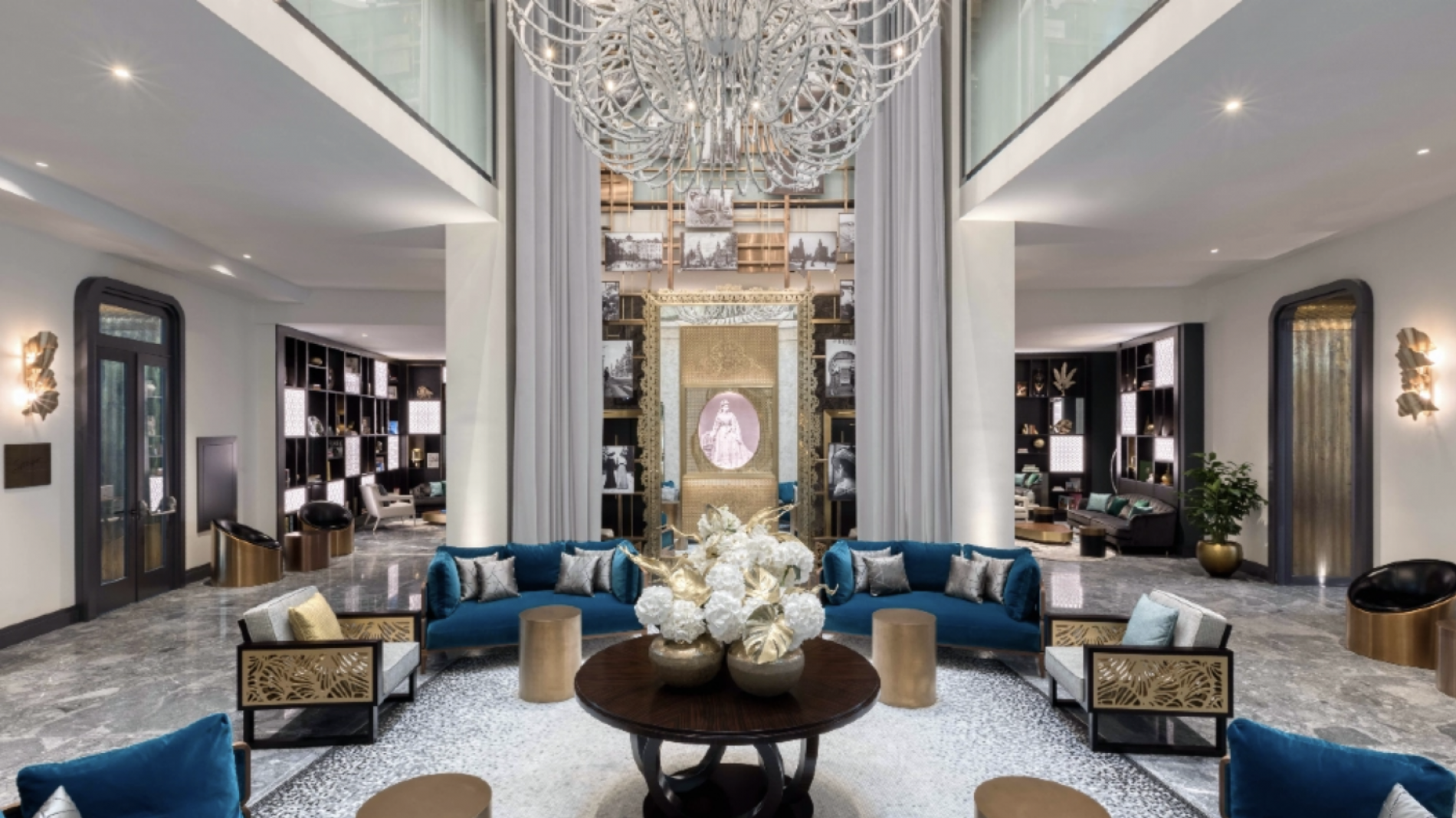 The late 19th century was a particularly heady era for Budapest. Elegant architecture was flourishing, and Princess Marie Clotilde of Saxe-Coburg and Gotha, who resided in Hungary with her husband Archduke Joseph Karl of Austria, wanted to partake in the Belle Époque’s renaissance. With all the fanfare over the forthcoming Elisabeth Bridge linking the Buda and Pest sides of the Danube River, the princess decided to commission a duo of grand, symmetrical buildings poised at the bridge’s Pest-side entrance. And now, after years of neglect, one of those UNESCO-protected structures was just transformed into Matild Palace, the city’s first Luxury Collection hotel. (Klotild Palace, its sibling, will also become part of the Marriott family when it finds new life as a St. Regis in a few years.)

Budapest is strewn with five-star properties like the FOur Seasons Hotel Gresham Palace, the Aria Hotel Budapest and, most recently, the Párisi Udvar Hotel, which debuted as part of Hyatt’s Unbound Collection in 2019. But Matild Palace’s calling card is a deft balance of past and present.

“Matild Palace reimagines its legacy while effortlessly capturing the many facets that make the city so spectacular—the diverse and vibrant culinary offerings, incredible cultural significance and breathtaking architecture and design,” Philipp Weghmann, vice president and global brand leader for the Luxury Collection, tells Robb Report. “The building holds the key to the city’s glamorous past, with history found at every turn, and we look forward to welcoming travelers to discover its magic and allure once again.”

Completed in 1902 by the architects Kálmán Giergl and Flóris Korb (who also worked on the New York Palace and the Liszt Ferenc Academy of Music, both of them Budapest landmarks), the neo-baroque Matild Palace was, by all accounts, stunning. It featured Zsolnay ceramics—even to encase the heaters—and vivid stained glass works by the renowned Hungarian artist Miksa Róth, and was awash in intricate ironwork and moldings. Many of those striking details have now been thoughtfully restored by artisans, under the supervision of London firm MKV Design; you can spy the stained glass on the hotel’s mezzanine level, for example, along with a selection of Zsolnay pieces.

In the 130 guest rooms and suites—which were converted from the apartments where members of the monarchy and upper classes once dwelled—there are jolts of peacock blue and stunning embroidered headboards that reference The Adventures of Sindbad, a Hungarian classic published in 1911 by Gyula Krúdy, one of the writers who frequented the Belvárosi Coffee House literary hangout once housed in the palace.

Most rooms flaunt bathrooms that are brightened by blue and gold tiles—a nod to Budapest’s famous mosaic-covered Gellért Baths—but some are simply swathed in marble, calling to mind hammams. (Guests who want to properly partake of the Turkish hammam ritual can head down to the petite Swan Spa.) Top room options include the Crown Tower Suite, which is carved into the building’s 157-foot-high tower and features a dizzying spiral staircase, and the Maria Klotild Royal Suite, with super-sized living room and panoramic city and river views.

But while Matild Palace celebrates its historic roots, it still manages to feel modern. A selection of slope-roofed Loft category rooms and suites on the fifth floor—a nod to the studio spaces of the artists the princess once patronized—forgo touches like the signature headboards in favor of contemporary artwork and furnishings. And the lobby’s towering vintage photo collage lives alongside a large-scale sculptural chandelier reminiscent of a gleaming snowflake.

Plus, there is the first Central European outpost of Wolfgang Puck's Spago (the closest other location is in Istanbul). Staying true to the famous brand’s roots, the always-packed restaurant’s sprawling terrace has a distinctly LA vibe, with greenery and coral lounge chairs setting the scene for cocktails and late lunches of spicy lamb sausage pizza. Later this summer, it will be joined by the Duchess, a cocktail bar with a moody jungle aesthetic that will open on the roof.

Even more fitting will be the autumn arrival of Matild Café and Cabaret, which was inspired by the old coffehouse stage that was unearthed during the renovation. Intimate musical performances will unfold regularly here—but it will likely be the homemade cakes, served amid glorious period chandeliers, that will plunge guests right back into bygone bohemian days. Rates start at approximately $565 for rooms and $1,060 for suites. The penthouse Maria Klotild Royal Suite starts at approximately $7,596 per night.