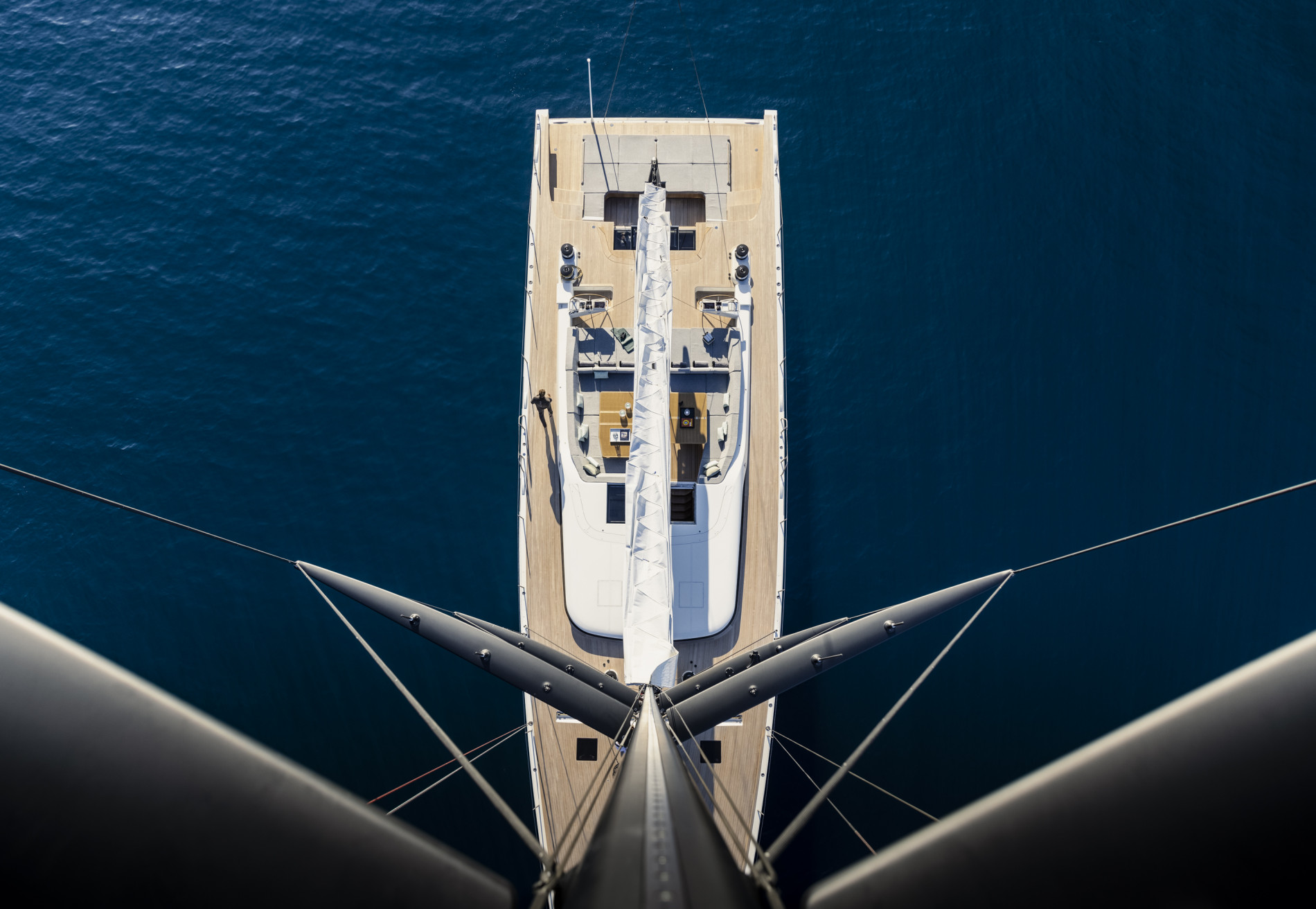 CeFeA: ON BOARD THE 34M SOLARIS SAILING YACHT

A sailor since childhood, CeFeA’s owner knew exactly what he wanted from his new boat – and who could help him realise it. BOAT reveals the collaborative process that yielded a 34 metre with performance and family comfort.

It’s hard to imagine an owner more in control of his creation than Marc Giorgetti was with the design and build of 33.77-metre CeFeA. Behind that confident shaping of a boat is, unsurprisingly, a wealth of sailing knowledge.

As a child holidaying on Lake Maggiore, Giorgetti was often on the family’s Riva, but as an adult, his first personal boats were two blue water sailing yachts by French builder Amel, the second a 16 metre. Stepping up in size to something a bit more Med-friendly, he turned to a 22-metre Doug Peterson design and arranged for it to be built at Italian yard Solaris in Aquileia, at the very top of the Adriatic Sea.

During the process of customising the yacht’s interior, to circumvent the back and forth of plans, Giorgetti asked the yard for the CAD files; he would fill in the details with architects at his own construction firm, working within the yard’s well-developed engineering plan.

“It worked out perfectly,” says Giorgetti. “While we were building the boat, the principal at the yard told me that he would like to adopt some of the ideas. He also asked me if I would like to invest and become a partner in the yard. I liked what they were doing and I like the work style and spirit at the yard. I am an entrepreneur, so I invested in exchange for one-third of the company.”

After sailing the Peterson design for several years, he had more ideas to incorporate. His next boat would, of course, be from Solaris, but as the American naval architect Peterson had passed away, the yard suggested a design by Argentinian naval architect Javier Soto Acebal, who had penned several production boats for the yard. He designed a sporty 22 metre, which became Giorgetti’s second Solaris. The third, also 22 metres, had a different look to the deckhouse with neoclassical brightwork ringing the structure rather than the elegant raised deck saloon style.

In 2016, Giorgetti and his family decided they were ready for a larger boat, one customised more to their lifestyle. Soto Acebal had the inside track on the design commission, but before Giorgetti would commit, he flew to Soto Acebal’s office in Buenos Aires to make sure the naval architect understood his requirements. They spent two days talking about his current boat, hull shapes, keels, use of foils and rudder configurations. On a whim, Soto Acebal suggested they go sail his own boat, a 9.4-metre daysailer named Pilar.

“It wasn’t until we spent some time sailing on my own boat that I realised how skilled a helmsman he really is,” says Soto Acebal. “He has that certain sensitivity needed to exploit a yacht’s full potential. I didn’t know him very well, but the first time aboard he literally caught the tiller and gave it back to me when we moored, not before.” That time spent sailing revealed to Soto Acebal just how far he could push the performance envelope for his client.

Giorgetti chose Soto Acebal to develop his new boat – which may be offered as a semi-custom series – along Solaris’s raised saloon lines for its 64, 68 and 80 footers. And for this new design, the yard and the architect would pull out all the stops on weight reduction and performance.

The brief was aggressive, pushing hard on the performance criteria while never losing sight of the all-around attributes needed to make this an enjoyable cruiser. “We explored highly prismatic hull shapes to achieve high speeds, but we needed to keep the hull balanced for any possible scenario,” says Soto Acebal. “A lot of computer simulation was done to simulate real-life conditions. The mast and keel have been moved as far aft as possible, keeping in mind the balance between the forces of the sailplan and the foils below the waterline. The hull gives high stability with a low centre of gravity, and thanks to the high-tech construction, weight has been reduced as much as possible in the aft sections.”

“I like to sail in the Mediterranean where the wind is often light in the summer,” says Giorgetti. “Even though I don’t race, a performance boat means not having to turn on the engine to go somewhere. With my new boat, I can start sailing in a light breeze, and in just eight knots of wind I can go 10 knots.”

He can also do that without a lot of crew, thanks to an easy sailplan. To make manoeuvring easy, they avoided a square top main and a long bowsprit. To offset the resulting sail area reduction, they chose a generous high-modulus mast with an upwind sail area of 618 square metres. The jib is self-tacking, adjustable by the use of a Magic Trim, while the mainsail can be hydraulically set with the use of another Magic Trim located in the bilge. CeFeA can tack and jibe with only two crew at the helm. A furling staysail completes the upwind kit, while a code zero, also with furler and tack adjuster, gives the boat more power for reaching. Completing the sailplan is an A2 gennaker with snuffer for a downwind sail area of 1,220 square metres.

In terms of construction, CeFeA is built of laminated pre-preg carbon fibre, Sprint technology by Gurit and Corecell M foam, vacuum-bagged and oven cured at 90 degrees C. All in, the boat weighs 75 tonnes, which puts it in Wally territory. In fact, the Solaris yard at Forlì was the birthplace of several Wallys, including two of the latest high-tech sailers, Barong D and Nahita, before Wally’s acquisition by the Ferretti Group.

“We have 20 per cent more volume than the Wally 110 and it still looks slim,” enthuses Giorgetti. It also has one more cabin thanks to centimetres of extra beam and a metre of additional length. Although 10 tonnes heavier in displacement than the 33.5-metre Wally 110 Barong D, its displacement is 11 tonnes less than Southern Wind’s 33.65-metre 110 Thalima. The 34.14-metre Baltic 112 Liara measures in at a similar 88 tonnes displacement. But apart from sailing prowess, an important part of CeFeA’sequation is the layout of the family spaces (the name is a mash-up of his children’s names, Celia, Felix and Alex).

Particularly notable is the aft-facing master suite, which features a partial glass aft bulkhead that opens not to a small owner’s cockpit but to a sprawling terrace. The latter, and the partial glass aft bulkhead, were introduced by Carlo Torre, of Monaco Yacht Temptation. Although MYT has of late been involved in the project management and design of large motor yacht projects, Torre also has connections to the Wally camp – he had a six-year stint in the 1990s as Wally’s first in-house design director. Torre has a personal passion (see previous page) for proving that superyacht comfort can be had in a 30-metre sailboat.

“The owner was very clear from the beginning that he wasn’t looking for a typical sailing yacht where performance meant sacrificing comfort,” says Torre. “Rather, he was striving for a yacht conceived around his personal preferences. He desired generous spaces normally only found on a motor yacht.”

On entering the saloon, the first impression is of light and walnut joinery – a departure from the more common teak and white oak (or white paint). Light comes from wraparound glass in the coachroof. “I always wanted to do an interior in walnut,” Torre says. The finish is matt and smooth, a complement to the softness of leather panels, gently curved shapes and the absence of decorative mouldings. He calls the look warm and precious yet unpretentious. “Maximum comfort [comes] by keeping generously flowing and uncluttered interior spaces, far removed from the compressed feel of typical sailing yachts. Following this philosophy, we managed to create a 40-square-metre master cabin with two full-size bathrooms, a desk area and direct access to the private [terrace].” Along with the master, there are two convertible twin/double cabins aft of the saloon and one twin forward.

On deck, clearly defined cockpits aft and forward are separated by the twin helms. The massive cockpit forward becomes the focal point of social activities and while under way, the helms, winches and manoeuvring areas are separated by enough real estate to keep guests safe. Giorgetti often likes to take the helm and the position of the wheels allows him to maintain connection with those in this cockpit in front of him. But the best piece of planning on deck is the aft cockpit, or call it a terrace or a beach club, which enables the owner to enjoy complete privacy and undisturbed access to his cabin.

The origins of this space are again born of experience. No matter how discreet captain and crew try to be, if they are operating the boat, they are looking forward and that means they are looking at or past everyone in the cockpit or on deck, notes Giorgetti. Seeking privacy and perhaps shelter from too much wind, he sought an open-air space aft of the helms, a situation that fitted beautifully with his desire for the largest possible master suite. By flipping the crew aft/owner forward layout on the majority of sailing boats this size, he and Torre were able to arrange a space with his-and-hers heads and a full-beam master opening onto a sweeping ocean view. Wide steps cascade from deck level down to the cushioned terrace, which at anchor provides easy tender and water access as well as a spot for the owner and family to grab a little alone time while enjoying the elements.

“I thrive on the feeling of being propelled by nothing but the wind and passing motor yachts with ease, especially in adverse conditions. We spent 18 months on the planning… the resulting yacht is simply stunning and incredibly fun to sail,” says Giorgetti.

This feature is taken from the April 2021 issue of BOAT International. Get this magazine sent straight to your door, or subscribe and never miss an issue.