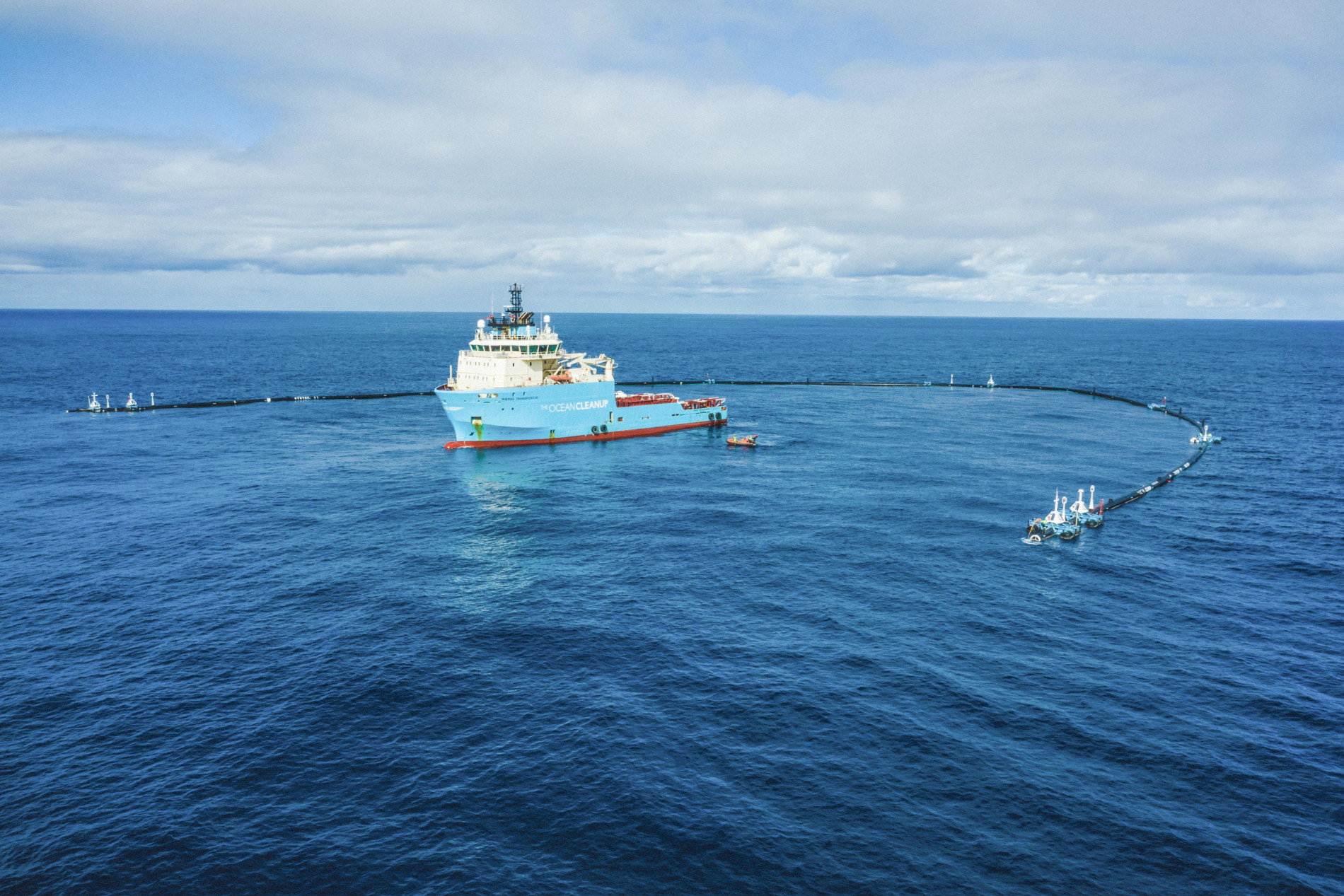 CLEANING UP THE GARBAGE PATCHES

OVER 5 TRILLION PIECES OF PLASTIC CURRENTLY LITTER THE OCEAN

Trash accumulates in five ocean garbage patches, the largest one being the Great Pacific Garbage Patch, located between Hawaii and California. If left to circulate, the plastic will impact our ecosystems, health, and economies. Solving it requires a combination of closing the source, and cleaning up what has already accumulated in the ocean.

Create a Coastline where there are none

The challenge of cleaning up the gyres is that plastic pollution is spread across millions of square kilometers and travels in all directions. Our cleanup technology has been designed to do the hard job of concentrating the plastic first, before it can be effectively removed from the ocean.
The system consists of a long floater that sits at the surface of the water and skirt that hangs beneath it. The floater provides buoyancy to the entire system, while the skirt prevents debris from escaping underneath and leads it into the retention system, or cod end. A cork line above the skirt prevents overtopping and keeps the skirt afloat.

For an area of this size, active cleanup methods would be too energy-intensive; this is why we have chosen a passive design. The cleanup systems rely on natural forces to navigate the patches – a feature that also increases its survivability in the harsh ocean environment.
Both the plastic and system are being carried by the wind, waves, and current. However, to catch plastics there needs to be a difference in speed between the system and the plastics. Using a sea anchor to slow down the system, plastic can be retained and captured.

Concentrate the plastic and take it out

The combination of natural forces and a sea anchor create a drag, which makes the system move consistently slower than the plastic, while allowing the plastic to be captured.

The system autonomously navigates the garbage patch for extended time periods, catching and retaining plastic in the center of the system.

Once the systems are full, a vessel acting as a garbage truck of the seas will periodically remove the collected plastic.

Our floating systems are designed to capture plastics ranging from small pieces just millimeters in size, up to large debris, including massive discarded fishing nets (ghost nets), which can be tens of meters wide.

Models show that a full-scale cleanup system roll-out could clean 50% of the Great Pacific Garbage Patch in just five years.

After fleets of systems are deployed into every ocean gyre, combined with source reduction, The Ocean Cleanup projects to be able to remove 90% of ocean plastic by 2040.

After years of research and testing, The Ocean Cleanup team caught its first plastic in the Great Pacific Garbage Patch in 2019, during the System 001/B campaign.

We have now transformed this first catch into a beautiful, useful product made with certified plastic from the Great Pacific Garbage Patch – with 100% of the proceeds going to the continuation of the cleanup.

Fund the continuation of the cleanup with The Ocean Cleanup sunglasses.

THE SYSTEM AT SEA

No heavily-trafficked shipping routes traverse the Great Pacific Garbage Patch, so the chances of a vessel coming across an ocean cleanup system are minimal. On average only 5 vessels can be found in an area twice the size of Texas.

But, in the event that a vessel does pass through the patch, we will implement extensive measures to ensure the safety of both vessels and our cleanup systems. Each future system of the fleet will be equipped with lanterns, radar reflectors, navigational signals, GPS and anti-collision beacons.

The AIS will continuously broadcast the location of the systems to passing vessels and the GPS will track the location of our systems, should they veer out of the patch. The US Coast Guard will chart the area as a special operations zone and will issue a Notice to Mariners concerning the presence of our systems.

Protecting the natural environment is at the heart of what we do. It is the driver behind our efforts to remove large amounts of plastic pollution from the world’s oceans. Hence, safeguarding sea life has been the number one driver behind our technology.

For the 116 days of the first mission, a team of scientists and experts conducted extensive monitoring and observation campaigns to understand any possible environmental impact of System 001 and minimize any potential harm to marine life. Over 1045 hours of visual and acoustic monitoring were performed, and during this time no substantial interference with System 001 and the ocean ecosystem and/or marine life were observed; nor did we observe any entanglement or entrapment of marine animals or protected species.

As we continue to learn more about the technology and the natural behaviors of the Great Pacific Garbage Patch, we will maintain a vessel nearby with trained observers to see how the system interacts with the natural environment. While extracting plastic, people will always be present to check for marine life before the plastic is lifted out of the water.

We have also conducted an Environmental Impact Assessment (EIA) for System 001 through an independent agency, CSA Ocean Sciences, which did not identify any major risks of our method to the environment.

Because the cleanup systems are meant to stay in the patch for long periods of time, it is important that our systems can withstand the forces of the ocean. A main component for survivability is flexibility. We designed the system to be limber enough to be able to follow the waves, and because the system is free-floating, it can drift when subjected to high current speeds.

Through extensive testing, we seek to identify weak spots prior to scaling-up our presence in the garbage patches. After the launch and initial tests with System 001 in 2018, we launched System 001/B – a more modular platform to trial modifications for speeding up versus slowing down relative to the plastic.