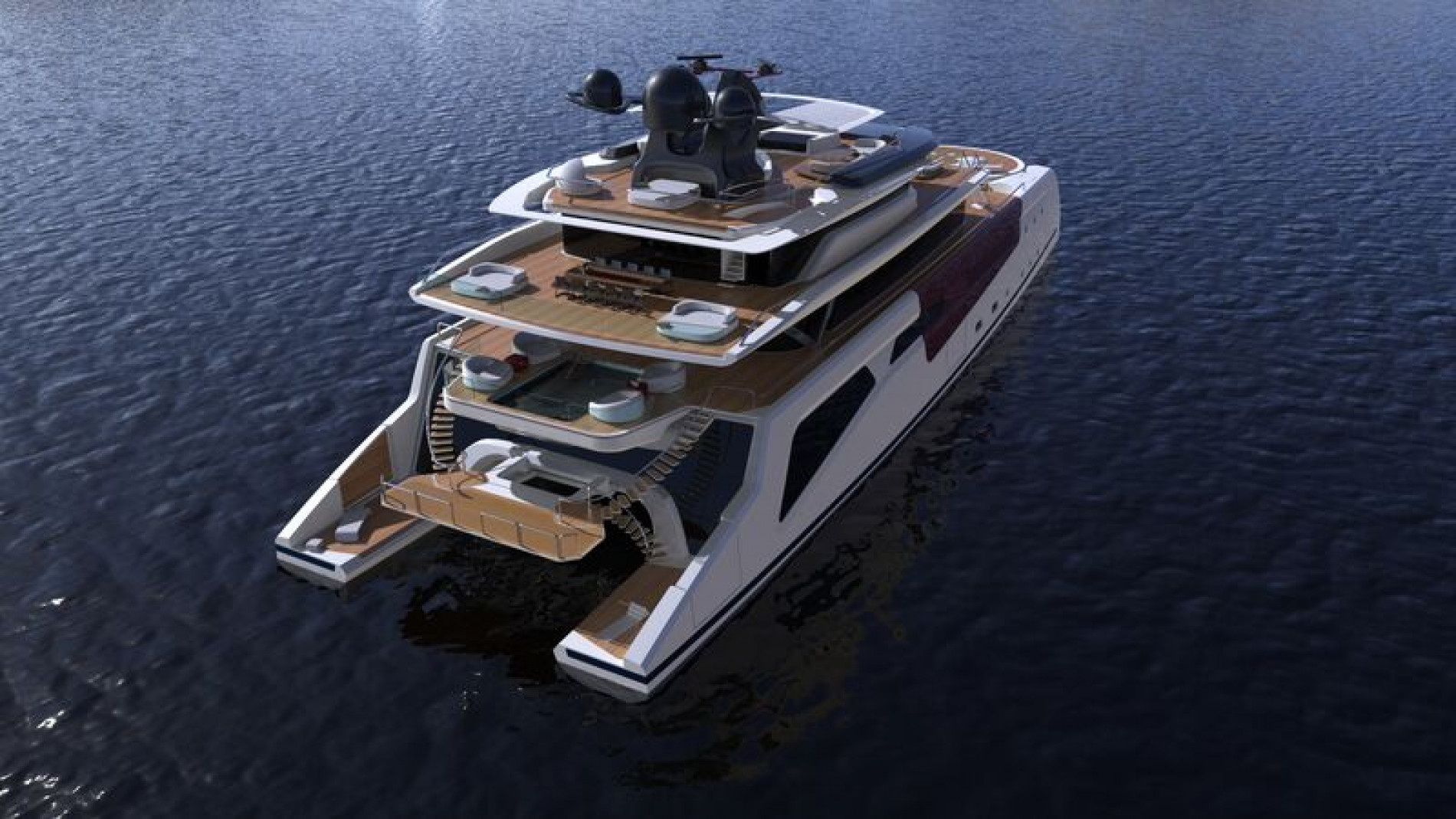 The Cynthesis 180 concept has been unveiled – she's a catamaran that does things differently. The Cynthesis 180 comes in at 58.3-metres in length and has been designed by Alexandre Thiriat and Christian Leyk of Coquine![design] who penned her interior and exterior respectively. Her preliminary naval architecture is the work of Nicolas Fauroux.

Cynthesis 180 offers heaps of outdoor living space as she has an abundance of deck area. She has twin decks that span her 17-metre beam and a slightly smaller sun deck that flaunts undisturbed 360-degree views and plenty of opportunity to unwind, thanks to numerous clusters of diverse seating arrangements where guests can either wine and dine alfresco, or soak up the sun in a more informal setting on her sunloungers.

Christian Leyk kept this design ethos at the forefront of the agenda across every deck space, fitting multiple areas to socialise and unwind at every corner. Her upper deck is framed by two relaxed dining areas forward and two oversized sunpads to aft – ensuring a harmonious synergy that caters to all occasions.

This division between forward and aft continues as you meander down the vessel. Forward of her main deck is more practical as it’s home to a D11 helipad and boasts an impressive open area for physical activities. To aft, however, Cynthesis 180 has deep cascading deck areas that culminate at a swim platform on the water’s edge. Guests have numerous ways to navigate their way to the water –the most novel being by an external spiral staircase.

Cynthesis 180 has approximately 600 GT of interior volume and can accommodate up to 12 guests. She has a fully customisable interior layout with numerous stateroom configuration options and a choice of multiple lounge areas. This bespoke interior plan feeds directly into the yacht’s philosophy of being owner-centric.

That being said, there are a few special features that are cornerstone of this concept: multiple bathing areas (pools & Jacuzzis) as well as foldout balconies for the owner’s and VIP suites.

The  Cynthesis 180 will also be as environmentally friendly, post build, as possible. She’ll be equipped with hydrogen and solar technologies to reduce her footprint. In terms of performance, the Cynthesis 180 is expected to have a 5,000 nautical mile range when cruising at 8 knots.

To fully maximise the yachting experience, Cynthesis 180 has been designed with a shallow draft to open up more destinations for her owner and she’s been equipped with a whole garage full of toys.

According to the design studio, Cynthesis 180 has already captured attention as two brokerage firms are talking to potential clients and a further three owner representatives have been in contact about the yacht.