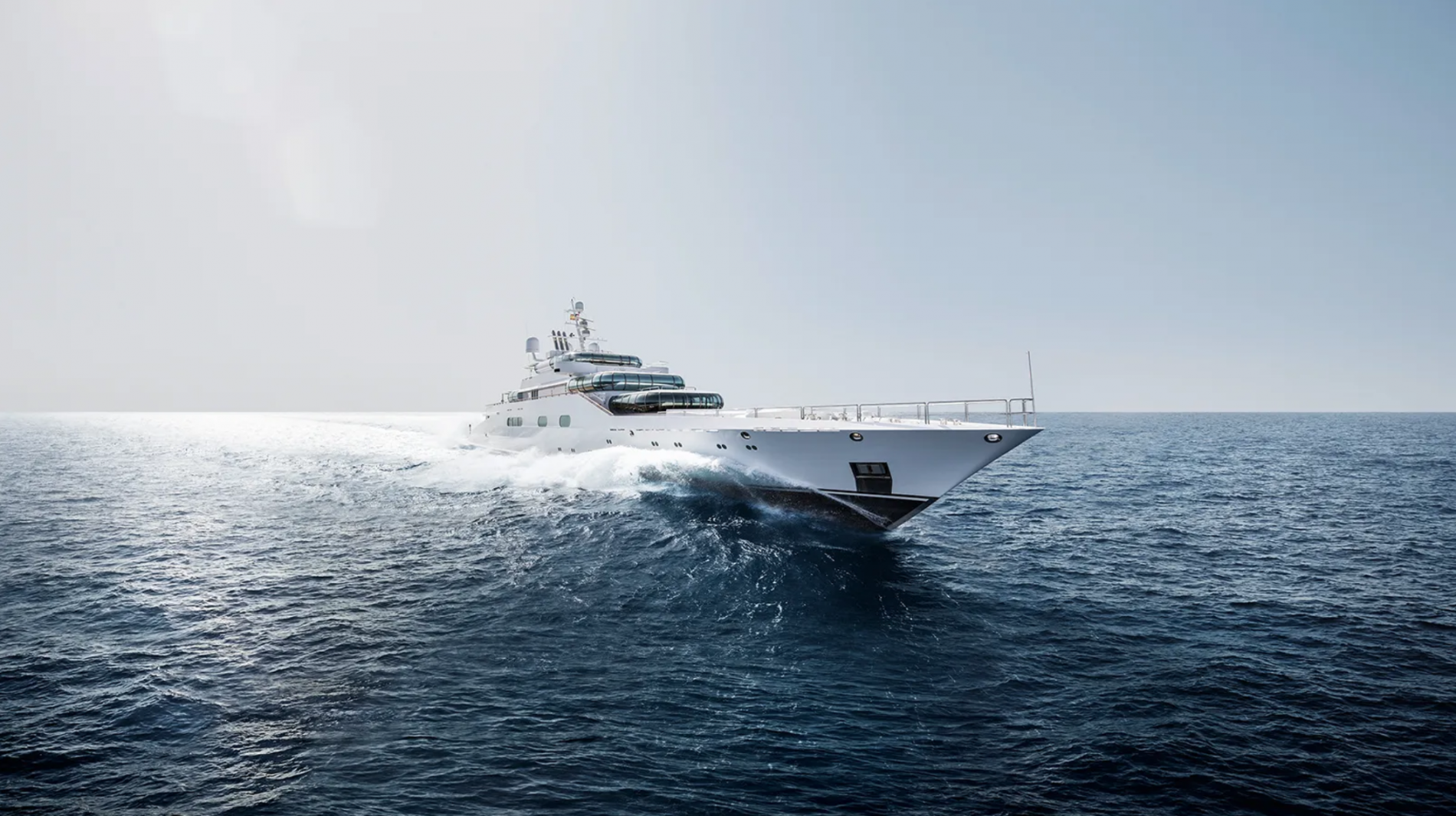 ICONIC YACHTS: INSIDE THE STORY OF THE RADICAL SUPERYACHT ZEUS

When Martin Francis was commissioned to design Eco, now Zeus, – his first motor yacht – in 1991, the brief from experienced owner Emilio Azcárraga was for a 55 to 60 metre superyacht capable of 25 knots. But after two years’ work that produced everything except the desired ‘wow factor’, Azcárraga said he was thinking of buying Carinthia VI (now The One), the 71 metre classic Bannenberg design.

As she was longer and had much less accommodation, she did not satisfy the brief Francis had been given, so he showed how, for a given size of superstructure, the projected vessel looked better and went faster with a longer hull. This proposal, at 72 metres, with radical curved windows inspired by Parisian buses, convinced Azcárraga to build the design.

As the contract negotiations progressed, he decided to go for the high-speed gas turbine option and thus increase the contract design speed to 30 knots. Blohm + Voss was chosen as the builder because of its extensive experience with high-speed naval vessels equipped with gas turbines.

The propulsion system selected comprised twin diesel engines driving wing jets for cruising up to 20 knots and a central GE LM1600 gas turbine driving a booster jet. Zeus was the launch customer for the LM1600, and the central KaMeWa waterjet was the largest built at that time. Extensive tank testing comprising 11 different transom and hydrofoil combinations proved that the proposed hydrofoil improved performance dramatically in both cruising (18 knots) and high-speed (30 knots-plus) modes.

For Zeus's interior, Azcárraga asked for an art deco-inspired look, and Francis appointed the designer responsible for the acclaimed Mamounia hotel in Marrakesh, François Zuretti. He had never worked on a yacht before but had an indispensable understanding of the owner’s tastes and lifestyle.

In contrast to today’s practices, Martin Francis managed the entire project, the owner having said: ‘It’s your project – get on with it. Here are five million dollars. Let me know when you need some more.’ None of the team of young designers and architects that was assembled had previous yacht experience but many later made their mark in the industry. Judith Hilpern, Clifford Denn, Espen Øino, Jonny Horsfield, Mark Smith, Dick Sarre and Dan Lenard all worked on the project at different times.

After the predictable – considering the level of innovation – teething troubles, Zeus performed remarkably well, using the gas turbine extensively at speeds of up to 35 knots. Azcárraga cruised her on both sides of the Atlantic and even acquired Eco Supporter, a small tanker, to enable ‘mid-flight’ refuelling on crossings under the gas turbine.

In her original configuration, the aft deck of Zeus was designed to carry a Maule turbo-prop float plane, a Riva Aquarama, a Tulio Abbate custom tender and a Harley Davidson. After her purchase by Larry Ellison in 1999, when she was renamed Katana, Francis converted the aft deck into a basketball court and lowered the owner’s deck aft to create a saloon with an outside dining area. Zeus was sold to British entrepreneur Aidan Barclay in 2004 as Enigma and was sold again in 2017, renamed Zeus.