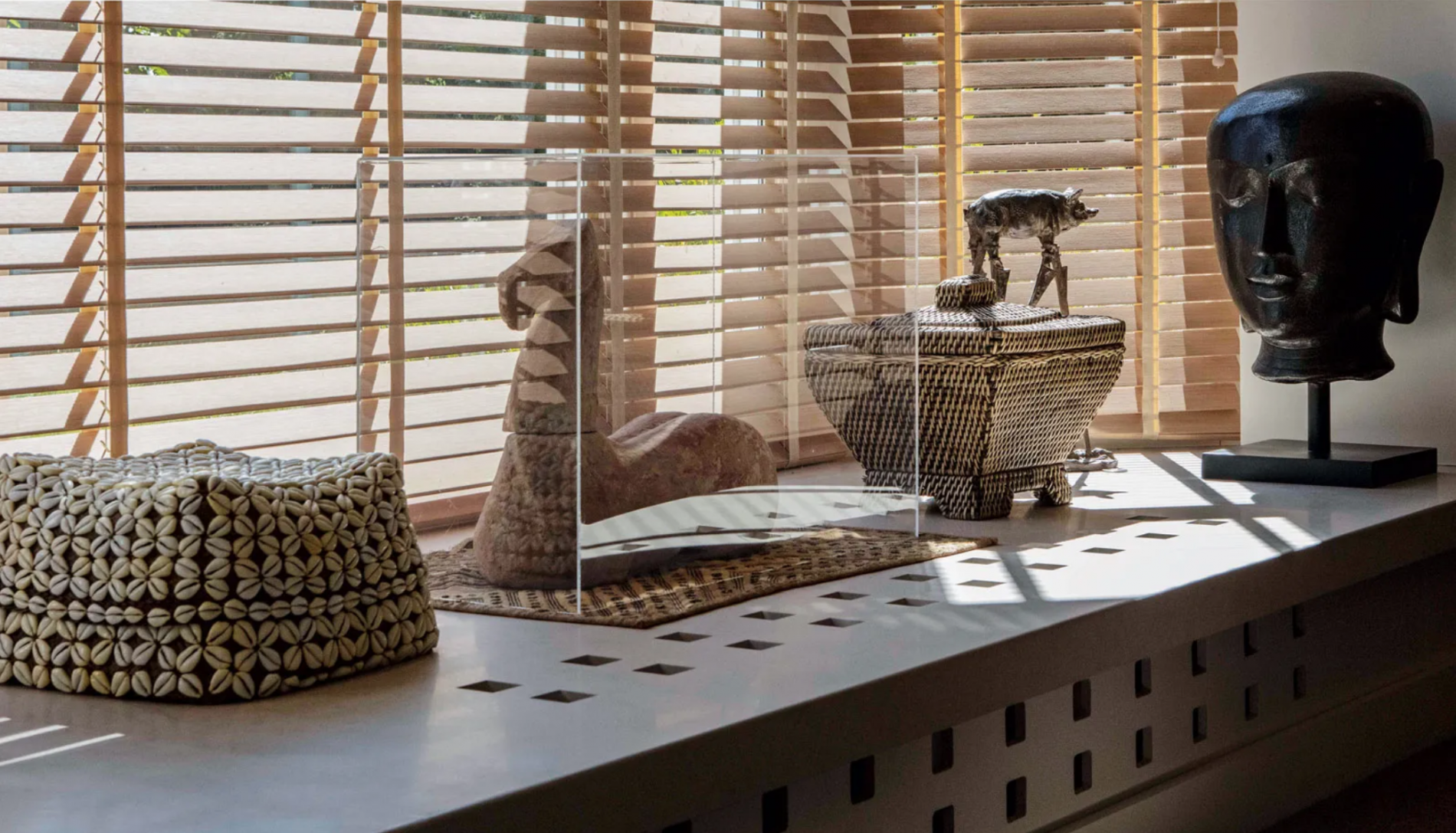 INSIDE THE SURREY HOME OF SUPERYACHT DESIGN LEGEND TERENCE DISDALE

"During my childhood, I’d never have imagined that one day I’d own a house like this,” says the renowned yacht designer Terence Disdale of his five-bedroom house in Surrey, UK, where he lives with his work and life partner Daniela Zulli. “I was born in north London and grew up in a property where my toilet was shared with another family at the bottom of the garden. Now, we live in this beautiful home with a huge garden and a swimming pool, and we’re so proud of it because it expresses who we are – but also for me, it’s a personal achievement,” he says.

Any yacht owner will be familiar with Disdale, the creative genius behind some of the world’s most spectacular boats. The 162-metre Eclipse (named Motor Yacht of the Decade at the 2015 World Superyacht Awards), 81-metre Kibo and the interior of 114-metre Pelorus are just some of the many names from his impressive portfolio, not to mention the private jets that have made him one of the biggest names in the business. In his 50-year career he has won more than 40 prestigious international awards, including a Lifetime Achievement Award at the ShowBoats Design Awards in 2014.

Zulli is managing director and chief project manager of Terence Disdale Design. Together, they’ve worked on many projects but their home, they claim, “is not decorated like one of our vessels”. Disdale aficionados, however, will note the similarities between his personal retreat and some of his most famous work.

The house is a richly decorated, multilayered affair, where contrasting patterns, shapes and textures blend together effortlessly. Disdale’s trademark mix of Eastern and Western design influences is evident throughout, and in every corner there’s something to catch the eye – from a striking tribal artwork, to an unusually dimpled vase, to one of the couples’ many curios, picked up while travelling around Asia. It’s the kind of home where you’d have to warn small children: look, but don’t touch.

The couple came across the building while Disdale was looking for extra garages for his classic car collection. “I immediately called Daniela because I thought it was just what we needed,” he says. “It’s Georgian in style but was actually built only 25 years ago, on the grounds of an old manor house. We loved it immediately because of its riverside garden, which was perfect for our four-legged friends, and [because we could] create a pond for our koi carp.”

The couple clearly relish time spent in the garden – often accompanied by toy poodle Woolly and Chihuahua Naomi – and in addition to the 200-year-old Lebanese cedar and mulberry trees on site, they’ve created an informal country-style garden, where the perimeter grows wild with poppies, nettles and other native plants. Wild grasses and climbing jasmine feature elsewhere, and there’s a mini orchard too. “The garden faces south-west, which gives us both sunrise and sunset reflected in the water,” Disdale explains, “and it’s illuminated at night to enhance the striking shapes of our trees.”

The grounds wouldn’t seem amiss surrounding a typical English country house, but inside, however, you won’t find chintz and dusty armoires. “It’s simple, but not minimalist,” says Disdale, explaining how the couple have remodelled the house extensively to create a home that serves them and their lifestyle.

A little-used kitchen, for example, was made smaller to make way for large informal areas, where they enjoy gathering with friends. Two spare bedrooms were turned into spacious walk-in wardrobes for Zulli – not to mention special spaces for Naomi and Woolly – and the couple also created a studio for working at home, something that’s been a boon during the Covid-19 lockdown.

Disdale also has his own area dedicated to one of his hobbies: fishing. “I keep all sorts of items in there, from books and personal records of major catches, to 150-year-old antique fishing rods,” he says. “They might not be interesting to many, but they have a big sentimental value for me.”

Zulli laughs. “It’s a place I never enter,” she says.

Light is a key consideration throughout the house, and most rooms are painted in tasteful muted ivory shades. “I always use eggshell paint, because matt emulsion just doesn’t offer the same reflection of light,” says Disdale, “and it’s light that gives that feeling of increased size.”

The exception to the colour scheme is the couple’s bedroom, which is painted oriental red by an artist who uses a special technique. “I’ve known him for 30 years, and he applies layers of paint over a shocking pink base, and then finishes it with a semi-gloss lacquer,” says Disdale. It gives a wonderful ambience, they both agree, noting that the same artist also painted their bathroom – black over a bright red undercoat, which works well against the travertine stonework.

It’s not just the paint that has an oriental feel to it – the floors are largely natural limestone with oriental rugs on top, and there are Asian pieces throughout the house, as well as lots of tribal African artwork too. “We’ve got a distinct taste and feeling that we’re attracted to, and we travel constantly with the sole purpose of finding unusual artefacts for our projects, so we collect a lot of pieces that way,” says Zulli, citing the antique carved doors from Bali that hang on their staircase as a case in point. Disdale recalls visiting Japan for one of his early and important projects – his first 65 metre. “That experience was an eye-opener for me, not only exposing me to Asian style, but also their culture and ethos, which I believe influences me even today.”

Every piece has a story. “I simply could not have something in my space that came from a catalogue,” he says. “That just would not be me.”

There are artworks by the likes of sculptors Helaine Blumenfeld and Yves Dana, and pieces from younger, emerging artists too. “We love the way that they all work with the same natural material [stone], and yet they all produce such different results, which are incredibly moving and clever at the same time,” says Zulli.

When it comes to downtime, the pool and its surrounding area is where the couple often find peace and quiet. “We’ve given it a very private, club-like atmosphere, and since we primarily use it at night, it’s fabulously relaxing with the dimmed light on the waxed polished ebony walls,” says Disdale.

“It almost feels like we could be in a resort in Thailand or somewhere in the Far East,” adds Zulli.

Otherwise, they enjoy canoeing together down the river, reading and listening to music. “Music is my passion and so creating a sound system that would allow me to have perfect sound in every corner of the house was one of my priorities,” says Disdale. What’s on the playlist? “I predominantly like blues, but I’ve been a great fan of Captain Beefheart and his Magic Band since my hitch-hiking tour of the US in the 1970s."

“I’m at a stage in my life now where I know who I am, what I like, and what makes me comfortable,” he goes on, “so our home represents me and Daniela, but that doesn’t mean we don’t continually modify it. We travel around the world where our curiosity leads us, and always find interesting new things to add.”

As for the building itself, “Daniela would like to add a whole new wing just for her shoe collection!” he laughs.

“Otherwise, it is pretty much perfect for us.”