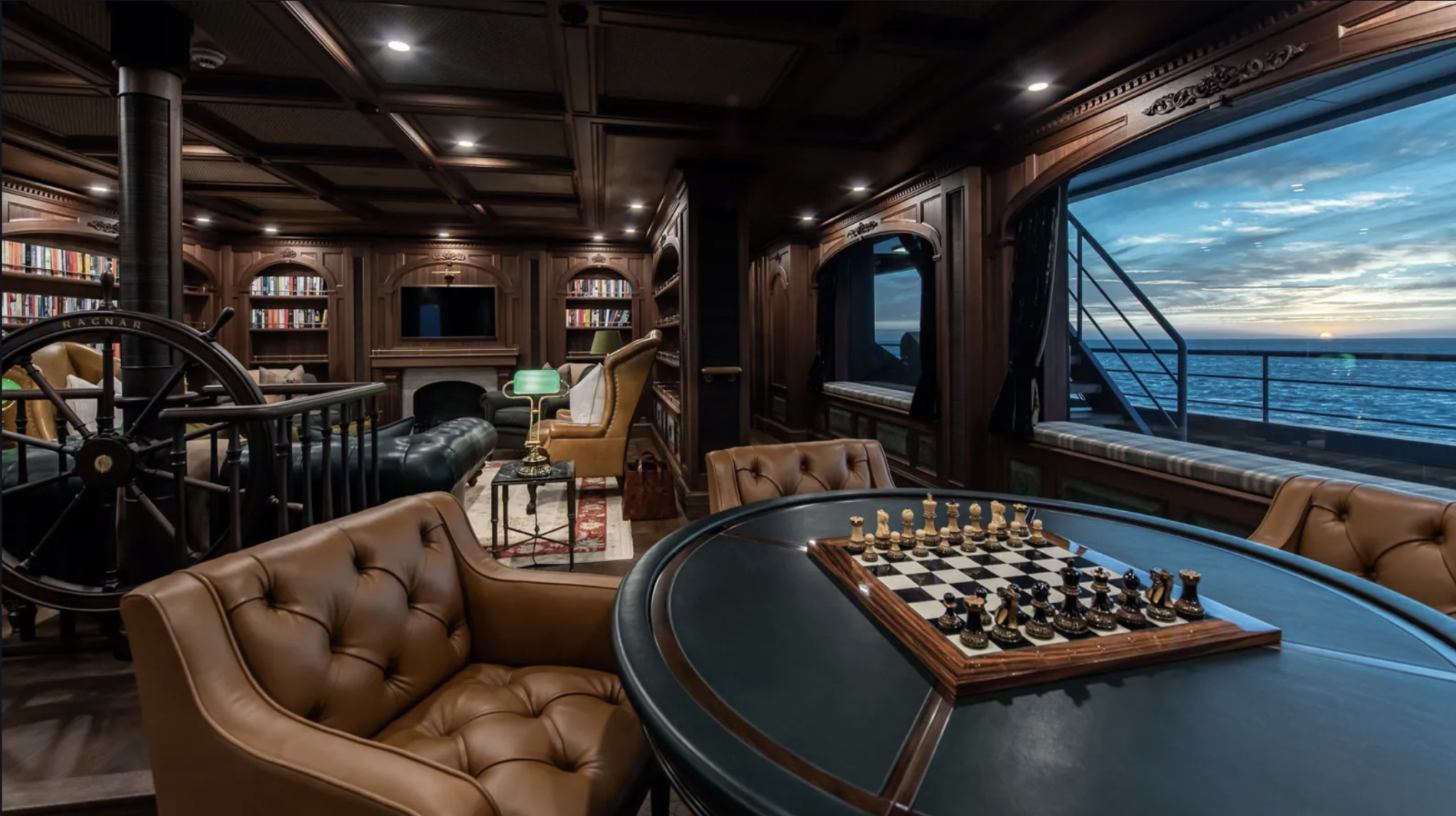 RAGNAR: ON BOARD THE SUPERYACHT INSPIRED BY VIKINGS AND BRITISH PUBS.

A cool conversion from a commercial vessel, Viking-inspired superyacht Ragnar is an explorer unlike anything else. Cecile Gauert steps on board the ice breaking boat to have a look at her refit work.

It has the name of a Viking warrior, the strength of a tug, an ice-breaking hull and a fantasy-filled interior. Truth be told, there is nothing conventional about Ragnar – from her diesel-electric propulsion with ice-breaking propellers, to her robust equipment. Her certified helideck can handle an Airbus EC145 helicopter. Her industrial crane extends several metres and supports a load of up to 10 tonnes. Her steel hull is really two in one: an outer shell and an inner one separated by an air gap, so that it is virtually indestructible. And while not unprecedented, her fleet of tenders and toys is impressive, including a BigBo amphibious ATV, heli-skiing equipment, four See-Doos, four ski scooters, six Seabobs, a multipurpose island and a giant slide.

Unlike most new yachts emerging from a Dutch shipyard at the beginning of the summer cruising season, the new 68-metre Ragnar set course for Iceland.

“The boat is performing well,” reported Captain Robert Lankester as he passed the Orkney Islands in the north of Scotland on his way to ReykjavÍk a few weeks ago. He was similarly complimentary about the boat’s crew: “They are an adventurous bunch and multi- skilled too. They bring quite a few unique skills to the yacht, from diving and whale experience to the military. I even have an ex-British Navy nuclear submariner as chief engineer.”

For such a robust, do-it-all type of boat, a shakedown cruise to Iceland is almost a must – but out-of-the-way destinations are also part of her mission. Ragnar carries equipment that will help scientists and meteorologists keep track of water and air temperatures in areas of the world that are hard to reach.

The owner is a sailor used to long passages and it was his dream to be able to travel everywhere and anywhere. “Ragnar was born from the idea of travelling around the world, but if it can bring some benefits to the world, all the better,” says Konstantin Kolpakov, CEO of Arcon Yachts, which manages the vessel.

To accomplish his goal to go where few have gone before on private yachts, the owner chose to convert a commercial ship. His quest to find a Northern European shipyard that could realise his idea led him to Icon Yachts in Harlingen. Although established as a new yacht builder in 2005, Icon cemented a solid reputation in the refit sector with the conversion of 73-metre Giant into 77-metre Legend in 2016.

The owner liked the idea of breathing new life into an existing vessel that was no longer used, and as serendipity would have it, such a vessel was available to see near Icon Yachts.

Sanaborg was an ice-breaking multipurpose support vessel built in 2012 for a company that provides logistical support to the offshore gas and oil industry. She was designed to operate in the shallow Caspian Sea and to reach a minimum speed of four knots in 0.6 metres of ice. To do so, she was equipped with electrically driven Wärtsilä Icepod thrusters able to get the vessel out of icy traps by moving forward or backwards. She had space for just eight crew and five passengers and a vast open deck, allowing her to carry whatever equipment was required to support offshore operations, and a bollard pull (pulling power) of 36.3 tonnes.

It was to the owner’s credit that he could envisage what Sanaborg could become as they stood in the ship’s bridge looking down at the blunt bow and vast open deck, says Stephan Vitus, head of project development at Icon Yachts. “We agreed conceptually that it could do what he wanted it to do,” he says. “I prepared a rough sketch to show that we could keep the original superstructure, the crew accommodation and bridge, and from there we developed the space arrangement.”

The next step was a feasibility study carried out by Icon Yachts and Conoship International, the original architects, to show that it was possible to convert the original platform to a far more voluminous explorer compliant with Polar Code 5 and Large Yacht Code 3. “The owner was keen on Polar Code, which is a fairly recent certification, and it was quite a bit of work because Sanaborg (although built to Ice Class) was not built to Polar Code,” Vitus says.

To achieve the look he desired for an explorer unlike any other, the owner then approached British design firm RWD in 2017. “The exterior design brief was to take this commercial vessel, which is full of its own character, and turn it into something with a powerful presence. There was to be no hiding its commercial history,” says RWD designer and team principal Charlie Baker. “Conversions are not easy and there was a lot to be done to keep the Ice Class and build a fully functional yacht as well,” he says. “We were thinking, ‘Wow, we’ve never quite been given this before,’ and it was great fun.”

Baker and his team started the design with the face of Ragnar. “We looked at medieval helmets, stealth jets, a 1930s-style train inspired by [industrial designer] Raymond Loewy, [and] the rest of the lines continued from there. We made sure it kept its character of prone stance, executed in the commercial finish,” Baker says. “You can really see the medieval helmet design in the face of Ragnar.”

With the exterior look finalised, Icon went to work on the construction of a new superstructure that incorporated the original cabins and wheelhouse. Everything else is new – an observation lounge forward, an open deck above, the helideck, the toy garage and more. “All of that was added because the original vessel had nothing there. It was just an open stern vessel,” says Icon Yachts CEO Tony Gale.

Keeping the original crew accommodation where it was resulted in a layout unlike that of any other yacht. However, it works well for Ragnar’s mission as a private explorer and occasional charter vessel.

Most like a yacht is the top deck, a sheltered but open-air space with a spa pool, bar, barbecue and seating area. Stairs on either side – one for crew, the other for guests – lead to the A deck, which is divided between the large wheelhouse and a panoramic upper saloon with space for outdoor dining. The B deck has two identical owner’s cabins connected to a private terrace and the forward observation lounge, plus staff and officers’ cabins. Two staircases lead to the C deck, divided between crew area forward, a full-beam dining room and bar, and an exterior deck with a large pool. From the main deck – where there are five guest cabins, plus a spare – two sets of stairs lead down to the wellness area and a gym with the latest Technogym equipment. Between the two is a full-height technical tunnel, filled with pumps and manifolds, that connects the forward engine room and its Caterpillar engines to the pods.

At the outset, the interior was to be kept simple, more to cruise ship than yacht standards, but the concept evolved over time, a decision that extended the conversion by a few months but also made Ragnar an even better candidate for the charter market.

“For the interior, the brief was to create a comfortable space for people when they come back after heli-skiing, climbing, skiing or exploring,” Baker says. It had to be as welcoming as a ski chalet, complete with a ski room.

The interior borrows from many influences, from the masculine interior of brooding Scottish castles to the utilitarian elegance of Scandinavian interiors. It’s comfortable, tasteful and fun. “We discussed the different parts of the world he wanted to explore, and the interior reflects those areas,” Baker says.

In the upper saloon is a giant wooden wheel of the kind you’d find on a galleon, and in the dining room, in a niche originally slated for a piece of art, is a full-size likeness of the Viking warrior Ragnar. In the saloon, small leather inserts within the fielded panels are embossed with the coats of arms of explorers.

“The owner is fond of British-style pubs,” Baker says, adding that the design team enjoyed doing on-site research to create the look of the main saloon and upper saloon bars.

In contrast to the tartan fabrics, Chesterfield seats, dark-stained walnut walls and chevron parquet floors of the upper saloon and dining room, the observation lounge and guest cabins are finished with bleached oak and light, neutral colours “for a good night’s sleep”. The spa is Zen with plenty of warm travertine and teak to warm up after a ski expedition or an ice-cold shower.

Ragnar is also meant to be self-sufficient. “It’s a very hands-on, manual boat,” which is what you need in an explorer, says Richard Kaye, head of technical operations and sales for Arcon Yachts. For instance, “You can change the propeller without taking the boat out of the water by moving all ballast forward, which will lift the back of the boat out of the water.”

A necessary addition, given the variety of climates Ragnar will encounter, from the ice floes of the Northwest Passage or the Baltic to the warm shallows of the Caribbean or Mediterranean, was extra insulation and heating elements.

“We had to build a multi-weather-condition boat,” says Marcela de Kern Royer, business development consultant for Icon Yachts. “If you are going to Antarctica, you have to make sure that the fuel tank is not going to freeze, that the doors can open in very cold weather, that the windshield can be defrosted, you have to think about the antenna, and so on.”

On the other hand, it is nicely air conditioned throughout, so it can handle a temperature range of -30 to 40 degrees Celsius. “It’s so cool and interesting that I am sure a lot of clients will like to see it in normal sea conditions, in Mykonos, Ibiza or the South of France,” Kolpakov says. The boat is ready for that eventuality with plenty of outdoor spaces and a swim platform that extends from the stern. In fact, Ragnar is ready for just about anything.