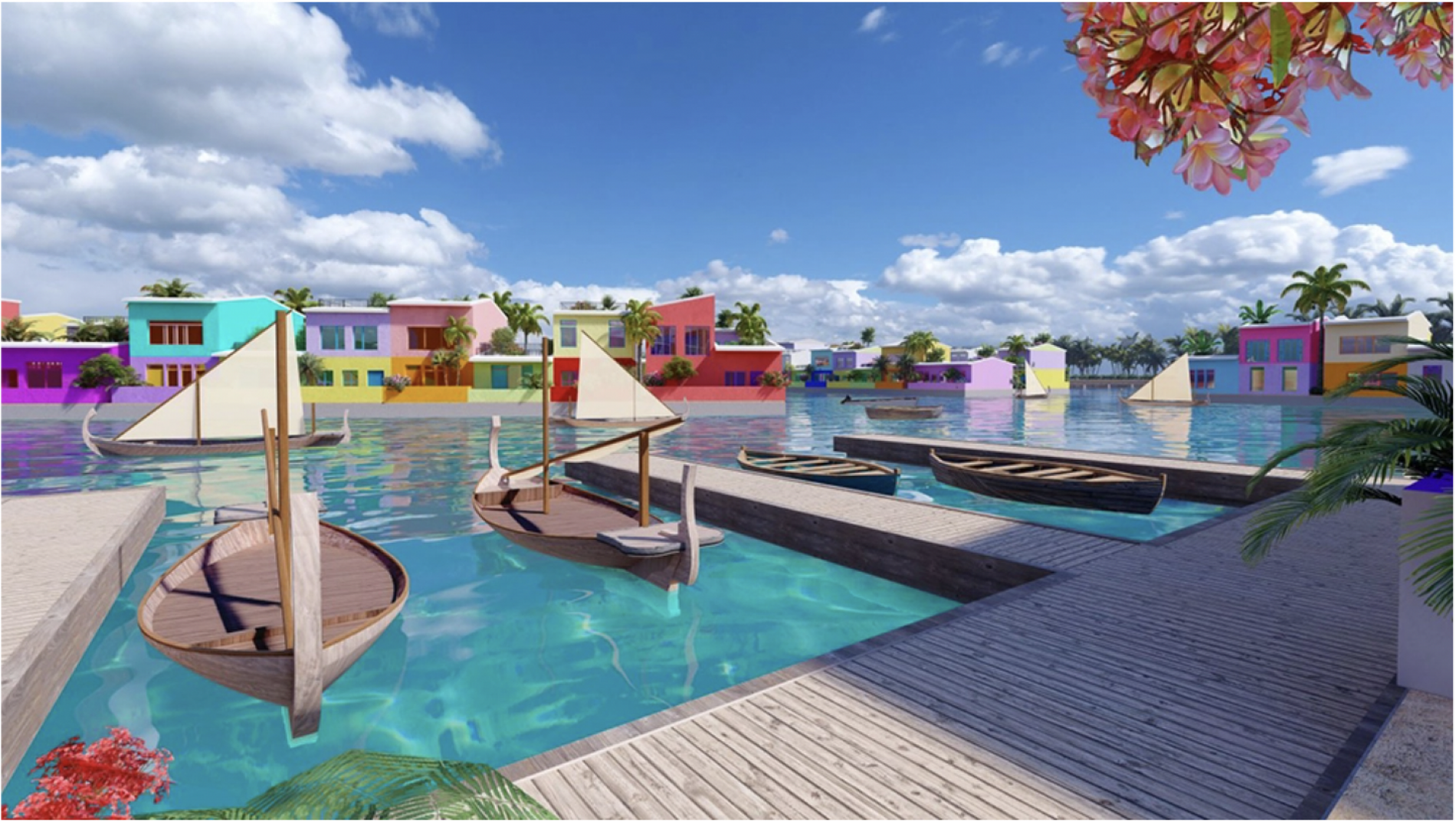 Nearly 80 percent of the Maldives could become uninhabitable by 2050 due to rising sea levels, according to reports from NASA and the US Geological Survey. But a newly revealed project is aiming to change those odds.

This month, Netherlands-based developer Dutch Docklands and the government of the Maldives shared plans for a first-of-its-kind floating city. It has been in development for more than a decade as of 2022 and will house thousands of floating, water-front residences in a functional grid that spans across a 200-hectare lagoon. Dubbed Maldives Floating City, the site will be located just 10 minutes away from the Maldives’s capital, Male. Hotels, restaurants, boutiques and a world-class marina are also expected to be part of the planned city.

Coral will play a crucial role in the project. The floating city’s hexagon-shaped segments are modeled on the geometry of local coral and connected to a ring of barrier islands. While the city floats above the warm waters, island barriers around the lagoon will serve as breakers down below. This unique design lessens the impact of waves while also stabilizing the structures and complexes on the surface.

As for domestic life, the city’s homes will be low-rise structures placed along palm tree-lined streets. A network of bridges, canals and docks will help you access the amenities by foot or bike. You’ll even find sandy beaches throughout the city that offer relaxation while stabilizing and protecting key structures within the lagoon. Outside of that zone, massive coral reefs will house the floating city’s hotels, restaurants and shops. Pricing for the individual homes, sized from about 1000 square feet and up, are expected to start at $250,000.

The city is backed by government-issued titles and deeds and may also allow its homeowners to qualify for Maldivian residency permits.

As for the elevated city’s environmental impact, former president of the Maldives Mohamed Nasheed claimed in a statement that “this Maldives Floating City does not require any land reclamation, therefore has a minimal impact on the coral reefs.” The city, he pointed out, may not be able stop the waves, but it can “rise with them.”

Nearing the final stages of planning, the Maldives will officially commence construction on the floating city this year. It is expected to be completed in phases over the next decade, according to Dutch Docklands. Once fully realized, a hospital, school and government building will join the project’s commercial and residential structures.

“This will be an amazing place where locals and foreigners can buy their dream property at affordable prices,” Dutch Docklands CEO Paul HTM van de Camp said. If true, we suspect everyone would welcome that.