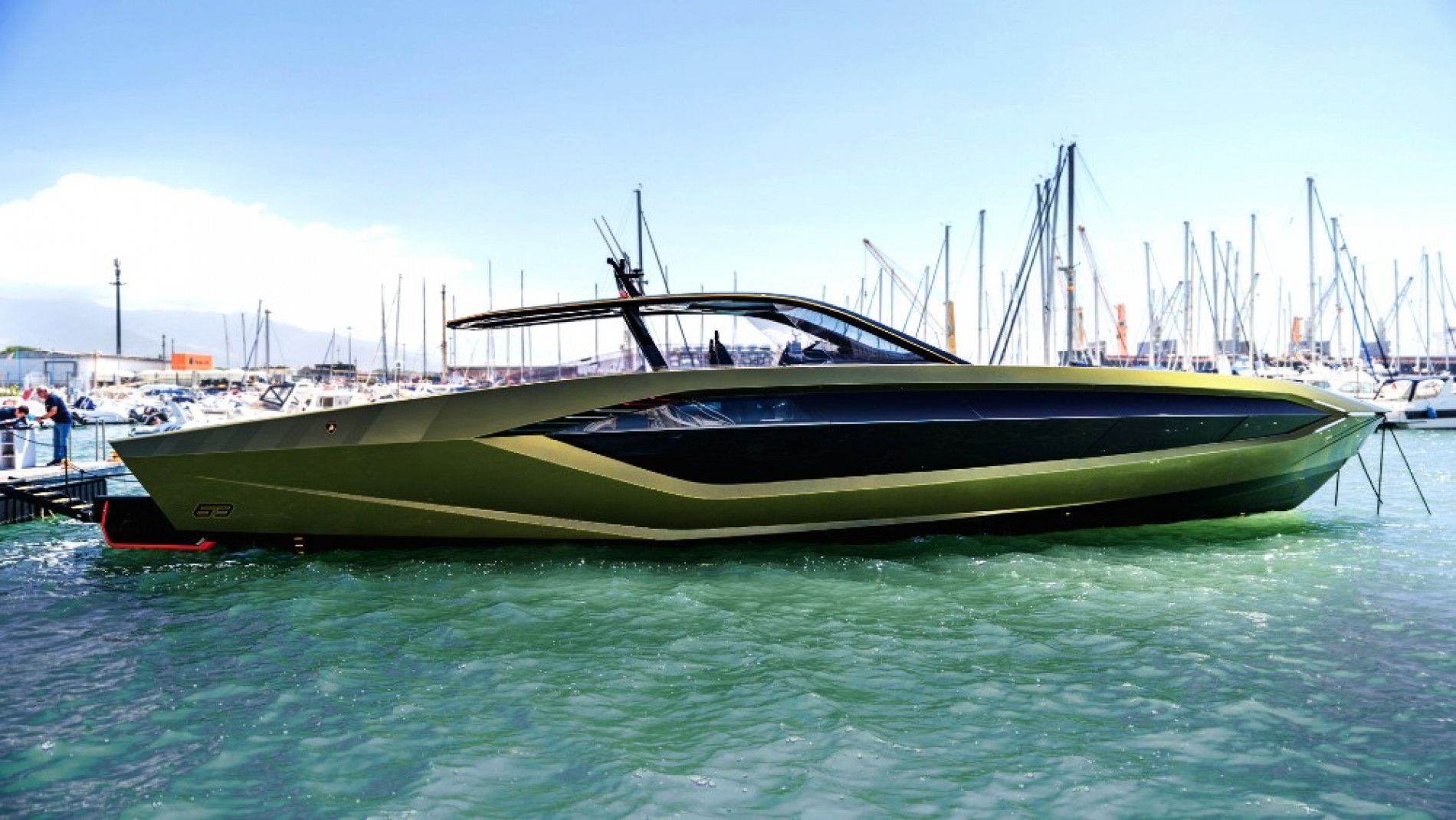 THE NEW 4,000 HP LAMBORGHINI 63 IS A CRUISER THAT WILL MAKE YOUR SUPERCAR JEALOUS.

For supercar addicts, Lamborghini’s Raging Bull badge has a prestige value that surpasses just about every other automotive marque. Who can forget the iconic Miura and Countach, for example, or fail to recognize the outrageously aggressive styling and high-pitched roar of a 12-cylinder Aventador when it looks like a blurred shadow passing on the highway?

The company has long produced big-block marine engines for offshore powerboat racing, but in 2020, it announced a collaboration with Tecnomar, part of The Italian Sea Group, to transpose the Lamborghini spirit into a ferociously styled, high-speed motoryacht.

The first Tecnomar for Lamborghini 63 (the 63 references the yacht’s length in feet and Lamborghini’s 1963 foundation) is now in the water. Robb Report was able to experience the yacht’s thrilling performance firsthand during an invitation-only event at Tecnomar’s Tuscany-based shipyard.

“What we didn’t want was to simply have a car on the water,” said Mitja Borkert, director of Lamborghini’s Centro Stile. “It would have been very naive to just take the car shape and put it on top of a hull. It had to be supremely clean and classy.”

”One of the biggest challenges was maintaining a very low profile like the cars, because on a yacht you need a certain amount of headroom for comfort,” adds Gian Marco Campanino, art director at The Italian Sea Group. “It was a balance between making everything as light and sleek as possible, but also robust and vibration free.”

A trademark Lamborghini motif is the distinctive hexagonal shape of its supercars when viewed from the front or rear. This has been subtly reproduced in the angled hull windows and open transom of the yacht.

Other features on the 63 reference specific Lamborghini models: The two leather pilot seats are adapted versions of those in the Huracan Evo with Sparco racing seatbelts; the helm is based on the steering wheel of the Aventador (minus the paddle shifts and air bag); and the verde gea paint job is the same as the new limited-series Siàn FKP 37, powered by hybrid technology. Even the dashboard graphics and aviation-style cover on the start/stop buttons are the same as the cars.

While the hull is made of fiberglass for strength, the carbon-fiber superstructure is designed to keep the weight down and center of gravity low. Under the aft sunpad are a pair of gleaming MAN V12 diesel engines, 2,000 hp each.

When combined with a slippery hull form and surface drives, they provide a top speed in excess of 60 knots, making this 63-footer one of the fastest yachts in her class. At a cruising speed of 40 to 45 knots, she burns around 100 gallons of fuel per hour for a range of 360 nautical miles.

High speed usually means a bumpy ride, yet despite a stiff breeze that was kicking up three-foot waves during a test run, the Tecnomar for Lamborghini 63 ran close to her redline speed, with no slamming and minimal vibration. She also proved a very dry boat: at the end of the trial there was hardly a drop of seawater on the windshield.

The 63 was designed to be a fast day boat or weekend cruiser. Behind the helm is a dinette and galley station, pop-up television and rear sunpad. Belowdecks is a forward master suite and guest cabin with twin single berths, both with sporty, carbon-looking trim and gray-and-yellow leather upholstery that carries Lamborghini’s automotive style to the water.

With a base price of about $3.5 million, the performance yacht is aimed at Lamborghini’s existing client base. The Italian Sea Group was reluctant to say exactly how many units have been sold to date. It did confirm, however, that available build slots through 2022 have already been reserved.