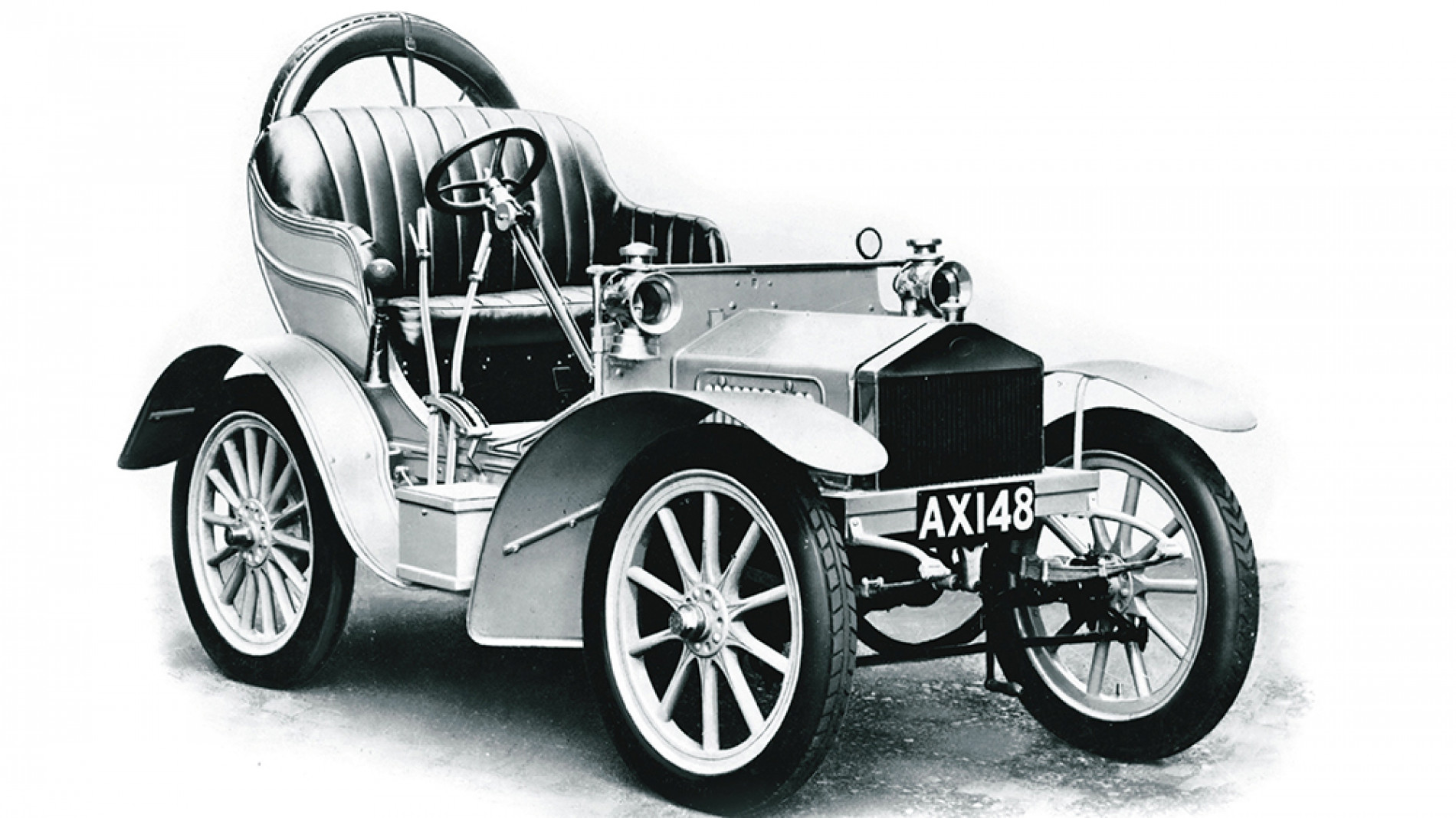 Henry Royce spent two decades creating all manner of mechanical and electrical inventions before deciding to focus his energy on the automobile in 1904. The English engineer was convinced he could build far finer cars than those being built on the other side of the Channel in France, and was able to persuade his fellow countryman (and aristocrat) Charles Rolls he could do so. Two years later, in 1906, the duo partnered to launch Rolls-Royce and the rest is automotive history.

The British marque’s storied history is as fascinating as it is lengthy, rife with incredible moments of ingenuity, innovation and pure opulence stretching from its beginnings to the present day. Below, 21 of the most interesting facts from the marque’s 116-year history.

The First Rolls had 10 horsepower

Royce’s first creation, which made its debut in 1904, had a 1.8-liter two-cylinder that delivered 10 horsepower. The aptly named Royce 10 featured a three-bearing crank and twin camshafts that actuated the side exhaust and overhead valves. To get everything hauling, that mill was mated to a three-speed manual transmission.

The model for The Spirit of Ecstasy was shrouded in scandal

Rolls-Royce’s now iconic hood ornament, The Spirit of Ecstasy, debuted in 1911. It was commissioned by car collector Baron John Edward Scott-Montagu, who based the figure’s likeness on his secretary-turned-mistress, believed to be Eleanor Thornton. Earlier iterations of the sculpture have her finger pressed against her lips, reportedly a wink at their decade-long affair. Thornton perished at sea in 1915, en route to India, when a German U-boat sunk the ship she was traveling on. The sculptor of the statuette, Charles Sykes, adopted and evolved the design for Rolls-Royce, and it’s been employed ever since.

When BMW bought Rolls-Royce from Volkswagen back in 2002, the rights to The Spirit of Ecstasy were held by Volkswagen. Subsequently, Volkswagen requested $40 million to transfer ownership to BMW, which agreed to the terms and paid the sizable sum.

The EU banned the illuminated Spirit of Ecstasy

The Spirit of Ecstasy may be the most famous hood ornament in automotive history. Because of that, Rolls-Royce hasn’t changed it much since it was first introduced. That is, until 2016, when the marque started offering the option of an illuminated ornament. If that sounds sacrilegious to you, you’re not alone. The lit-up Spirit of Ecstasy has since been banned in the EU. Is it because the government body is made up of automotive purists? It might be, but the official reason is that the illuminated ornament creates too much light pollution.

Rolls-Royce has always focused on crafting durable, enduring vehicles. The commitment to superior build quality has translated into a startling fact: At least 65 percent of all Rolls-Royce cars ever to emerge from the production line are still operational and on the roads today.

Rolls-Royce once made a .50 caliber machine gun

And it was rather revolutionary for its time. During World War II, the head of the Rolls-Royce engineering team, Dr. Spirito Mario Viale, sought to improve the efficacy of the staple machine gun, the Browning M2. The Rolls-Royce .50 cal featured a locked breech, in lieu of the typical gas mechanism, and it fired at double the rate of the M2 and weighed more than 40 percent less. However, it jammed often and generated too much muzzle flash, so it never supplanted the Browning as the choice gun. One example is still known to exist, housed in the Royal Armouries Museum in Leeds, England.

Last year, Bugatti set the automotive world aflutter when its Chiron hypercar, piloted by Andy Wallace, hit 304.77 mph. However, Rolls-Royce got to that enchanting speed first. Its 2,300 horsepower, 36.7-liter supercharged Rolls-Royce V-12 engines were known for blistering performance and staggering speed back in the 1930s. Indeed, the speed record was set in 1933 by Sir Malcolm Campbell, hitting 272.46 mph in the Campbell-Railton Blue Bird, powered by a Rolls-Royce V-12. In 1935, Campbell took the rudimentary land rocket to the Bonneville Salt Flats in Utah and recorded a run of 301.33 mph.

Rolls-Royce was equally proficient in manufacturing prolific aviation engines, including the 27-liter Spitfire Merlin V-12, created in 1933. This engine generated such powerful thrust from the exhaust that when engineers simply angled the exhaust outlet backward, the Spitfire gained 10 mph.

Rolls-Royce’s automobile and airplane divisions were spun off from one other in the early 1970s and now have separate owners. The two companies still share the same name, though, along with the same hunger for excellence. Just look at the electric plane the non-carmaking Rolls-Royce announced a couple years back. The battery-powered aircraft recently hit a top speed of 387 mph in testing, making it not just the fastest electric plane but the fastest electric vehicle, period.

As Rolls-Royce gained a deserved reputation for elegance throughout the 1930s and 1940s, it became the only choice for the world’s elite. This notion further solidified in 1950 when the British royal family parted ways with Daimler to select Rolls-Royce as its preferred car manufacturer. Then-Princess Elizabeth was the first to receive a Phantom IV, which became a model only designed for the royals and other heads of state. A mere 18 Phantom IV models were produced, making it among the rarest of the Rolls-Royce’s ever.

You can send your chauffeur to a Rolls-Royce driving school

The coveted seats in any Rolls-Royce are in the back and, accordingly, many owners opt for drivers. But for the most comfortable experience, they may want to consider splurging on Rolls-Royce’s White Glove training program. The curriculum trains drivers on how to open and close doors without leaving fingerprints, how to brake without moving the passengers’ heads, and how to read and drive a road for optimal smoothness.

Only bulls are used for Rolls-Royce’s leather interiors

Since sumptuous leather abounds in any Roller, ensuring that each inch is blemish-free is a requisite. Rolls-Royce does this by only sourcing from bulls since cows can get unwelcome stretch marks during pregnancy. Furthermore, those bulls only come from Europe where the higher altitudes mean fewer mosquitos and other insects, minimizing bite marks.

One man paints all of Rolls-Royce’s pinstripes by hand

One pair of hands has been painting the pinstripes on all Rolls-Royce cars for the past 17 years, and they belong to Mark Court. Court has been doing this intricate work since the company opened its Goodwood plant in 2003. (It’s his only job, and reportedly earns him a six-figure salary.) Given the lack of room for error—the pinstripe paint is a unique variety that affixes instantly to the car’s paint, so mistakes result in the whole car needing repainting—it’s well-deserved.

It’s the details that separate the Rolls-Royce from everyone else. Just look at the wheels on every single vehicle that’s rolled off the line at Goodwood. You won’t really notice until you see the car in motion, and then it sticks out: The logo on the center cap doesn’t move. That’s because each official Rolls-Royce rim features a special gyroscopic mechanism that stops the center cap from rotating, thus ensuring the iconic RR monogram remains upright no matter what.

We may not know the official price tag, or even the identity of its owner, but the most expensive Rolls-Royce of all time is almost certainly the Boat Tail. Inspired in part by the car that used to hold that title, 2017’s Sweptail, the gorgeous Azur Blue cabriolet measures 19 feet front to back. The nautical-themed vehicle features a tapered rear that calls to mind some of the stateliest cars of the 1920s, like the Auburn 851 Speedster and Bentley Speed Six Boat-Tail. Just as impressive is the list of one-of-a-kind accessories, which include dashboard clocks made by Bovet (more on those below), a champagne cooler, a unique crockery set by Christofle of Paris and a matching parasol.

Its Bovet dashboard clocks can be worn as wristwatches

It’s hard to pick which of the Boat Tail’s accessories are most impressive, but if we had to name just one, we’d have to go with the swappable dashboard clocks made by Swiss watchmaker Bovet. The brand crafted distinct timepieces for both the anonymous owner and his better half. Even more ingenious, though, is that they double as wristwatches. Thanks to the unique feature, the owner and his wife will never have to worry about matching their outfits to their one-of-a-kind car.

It takes at least two months to build a Phantom

Introduced in 2003, the Phantom was the first Rolls-Royce offering under BMW, and the numbers behind the production are staggering. More than 200 aluminum pieces and 300 alloy parts must be hand-welded. Upholstery requires 75 square meters of material and about 17 days to complete. More than 44,000 colors are offered, and it takes at least two months to complete one single vehicle.

The embroidered headliner in the Falcon Wraith has over 250,000 stitches

Rolls-Royce is willing to go to great lengths to give their customers exactly what they want. Take, for example, the headliner in the Falcon Wraith. The stunning ceiling covering is decorated with an embroidered image of a peregrine falcon, a bird that can fly as fast as the car it adorns—200 mph. The detailed image took over a month to conceive, design and complete, and consists of over 250,000 stitches. That’s far from the only breathtaking headliner you’ll find in a Rolls, though. The official Starlight option, which is available on all of the marque’s vehicles, features 1,340 optical fibers, ensuring you’ll get a clear look at the night sky no matter the time of day it is.

The Ghost is packed with 220 pounds of sound-deadening material

The Ghost has long been lauded for its near-silent cabin. Rolls-Royce wanted to take things even further—or quieter—with the second iteration of its exquisite saloon. To do this, engineers came up with a new “Formula of Serenity,” which involved equipping the car with a rigid aluminum space frame that conducts less noise. Then they packed the car’s roof, trunk and floor with 220 pounds of sound-absorbing materials. The result is a ride so quiet and smooth you just might forget you’re in the back seat of a car.

The Wraith Kryptos is filled with secret codes

The limited-edition Wraith Kryptos Collection comes with its very own encrypted cipher. Hidden throughout the luxe coupé are a series of encoded messages—found everywhere from the base of the Spirit of Ecstasy to the rear seat piping—which can be used to solve the final puzzle. The marque took pains to keep the answer a secret, too. At the time of the car’s launch it was locked away in a safe at Rolls-Royce headquarters and known to just two people—the vehicle’s designer and company’s chief executive.

Clocking in at 93 Rolls-Royces, the largest collection of Rollers in history belonged to Bhagwan Rajneesh. If that name sounds familiar, he was the leader of a “spiritual movement,” eponymously called Rajneesh. He and his followers overran a small Oregon town back in the 1970s, all of which (including the Rolls-Royces) was recently showcased by Netflix’s documentary Wild, Wild Country.