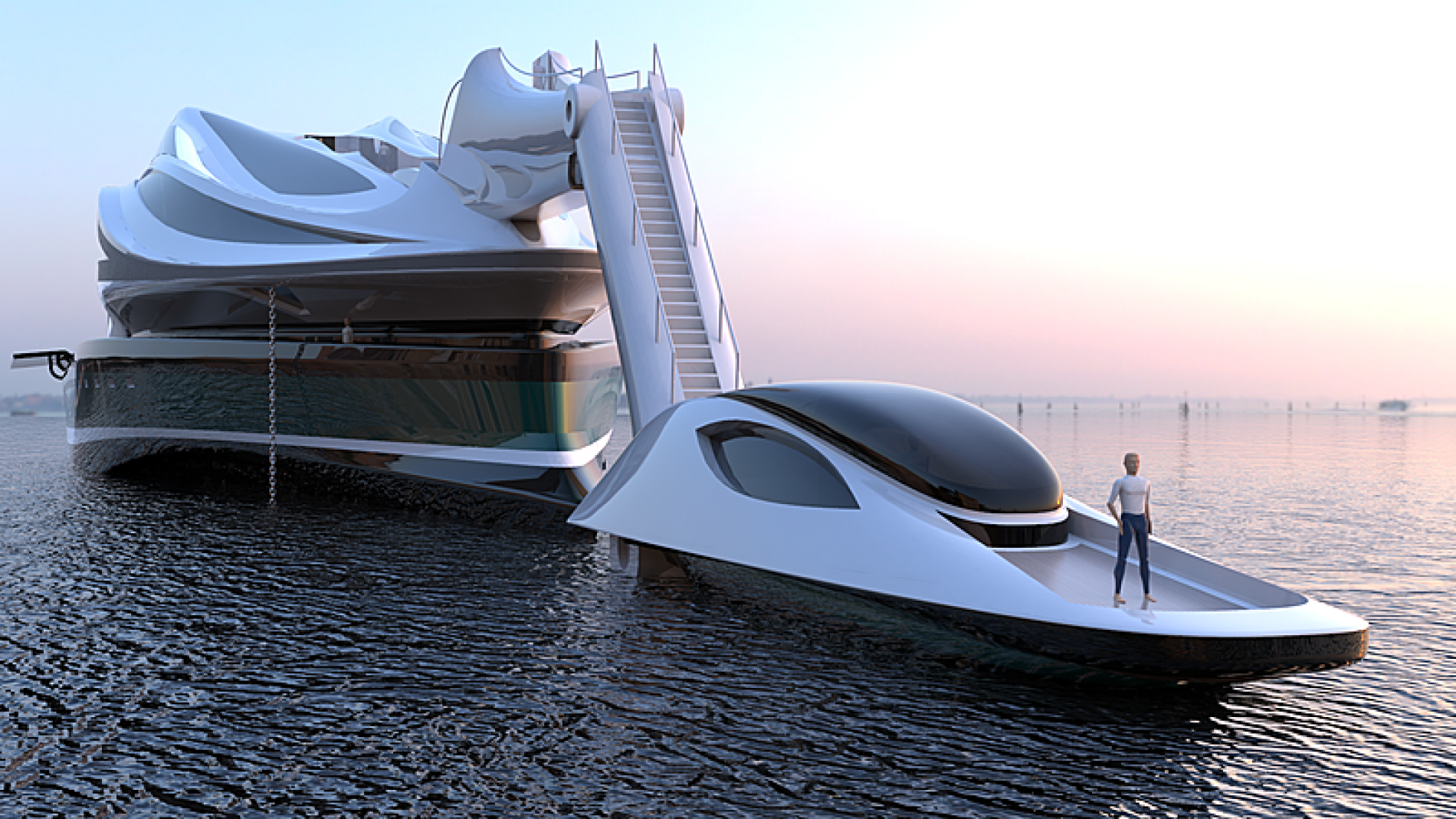 A SWAN, A CANOE AND A SUPER SCHOONER: 10 RADICAL SUPERYACHT CONCEPTS

Over the years we have seen a variety of radical superyachts concepts that have been penned by some of the most creative minds in the industry. From nature-inspired superyachts to a 300-metre scientific exploration vessel, we take a look at the top ten most radical superyacht concepts from the last five years.

Cast your mind back to February 2018 and you will remember Oceanco’s 115-metre concept Tuhura that was announced at the Dubai International Boat Show. Conceived in collaboration with Lobanov Design Studio, BMT Nigel Gee and the interior designer Achille Salvagni. “Our Tuhura is a simple idea,” explained designer Igor Lobanov, “The thought was to take a natural shape similar to those seen in the earliest canoe-type craft and augment it multifold to a larger scale, using modern technology.”

The main inspiration for the interior design is East Asia and the Pacific islands. Achille Salvagni refers to the interior as a “brushed teak habitat” including thin reveals in gunmetal and natural bronze with tatami floors.

September 2018 saw Sinot Yacht Architecture & Design gearing up to present its latest superyacht concept at the Monaco Yacht Show – the 115-metre Art of Life. Featuring a “striking exterior style” with an overhang at the stern and a forward projecting bow, Art of Life was developed to be a "statement of elegance," offering a successful blend of beauty and functionality.

Reminiscent of a 16th-century Dutch schooner, she features a fast, versatile and efficient hull much like a traditional schooner. The concept aims to offer clients unrivalled access to the environment around them, as huge aft windows from the stern lounge, large windows and multiple skylights ensure Art of Life is saturated by natural light and views.

The 120-metre superyacht concept Project L was revealed in November 2019 by designer Thierry Gaugain and represented by broker Alex Banning from SuperYachtsMonaco. Having created the naval architecture to be a blend of characteristics from a classic sailing yacht and motor yacht, Gaugain designed a smooth ovaliform exterior in one-way glass.  With the option to be fully opened to the elements, the exterior is designed to be “an ever-changing sculpture” and with the use of special exterior paint, will create a silhouette that can transform according to her surroundings.

She features a high-tech underwater media room, a spa and gymnasium plus a forward-facing owner’s lounge made entirely from glass for panoramic views of the ocean. Project L is the first solo concept by Gaugain.

In September 2020, Italian designer Lazzarini unveiled his latest avant-garde superyacht design: the aptly named 137-metre 'Avanguardia' concept. The design takes its name from the positioning of the control tower which resembles the head of a swan. With the inspiration for the 'head' stemming from a 1970s Japanese manga, the swan head functions as a control tower to manoeuvre the superyacht. The 'head' is detachable from the 'neck' and can be transformed into an auxiliary 16-metre boat, at which point the top part of the superyacht is then transformed into an auxiliary control tower.

When the vessel is in motion, the 'head' adjusts Avanguardia's position by lowering itself to the centre of the superyacht's body. Avanguardia is divided into five decks and could house up to 60 passengers on board, providing accommodation for up to 24 guests, 12 staff and 10 crew. She also houses two helicopters on board and is equipped with two helicopter hangars.

As well as their swan design, Lazzarini also released a brand new design in the series of nature-inspired superyacht concepts, Prodigium in November 2020. The 153-metre concept is inspired by a shark with two big side fins which transform into additional terrace space and the main living area windows designed to look like the jaws. Prodigium concept spans six decks constructed from carbon and aluminium with Roman columns positioned on either side of the entrance to support the upper structure and its swimming pool.

As well as hosting up to 44 guests, the concept holds up to eight tenders and three helicopters in her three hangars. Her rear deck incorporates a large port area with the capacity to accommodate yachts up to 30 metres in length. This area can also lift and lower up to 40,000 kg of yachts, tenders or toys.

The Dutch design firm CBSPRO Maritime announced a new multi-purpose 95-metre yacht concept, the Protean 95 in December 2020. The Protean 95 is designed to be adaptable to suit a wide range of functions, which according to the studio’s co-owner, can vary from a yacht support vessel, to a crossover expedition/explorer vessel, a race support vessel, a dive operations vessel, a entertainment/conference venue, a laboratory and research vessel. Guests will also be able to make use of the yacht’s swimming pool, wellness sauna, a fully-equipped gym, a cinema and various bar and lounge areas.

A 795-square-metre deck can house a heli-facility with helipad, under-deck dry storage and full refuelling capacity for a large helicopter. All types of smaller vessels from kayaks to tenders to submarines could easily be accommodated onboard and stored securely. She has been designed with two 15-ton capacity cranes which can be used for deployment.

Lazzarini didn’t stop there with their animal-inspired designs as January 2021 saw the launch of the 25-metre ‘amphibious catamaran’, Pagurus. The concept draws its power from both sun and water and was conceived initially as a military vehicle while shaped like a crab. To stiffen and reinforce the main body of the ‘crabmaran’, a bridge steel structure connects each side to the other. The twin steel conceived hulls can be configured with up to three bedrooms on each side. In total, Pagurus can accommodate up to eight passengers plus four crew members.

The yacht subdivides the living spaces in two side hulls, connected to each other through a bridge tower deck station. In the immersed part of the yacht, the hulls are designed with a recess space that guests on each side two 6.5-metre steel cylinders, each one with a helical spiral flange like the thread of a screw.

In April 2021, Iddes Yachts founder Ivan Salas Jefferson launched their concept for a 300-metre scientific exploration vessel, Earth300. The one hundred percent emission-free superyacht includes 22-state of-the-art laboratories and the radical design of a 13 story ‘Science Sphere’ with a cantilevered observation deck. The vessel has the capacity to accommodate 160 scientists, 20 resident experts, 40 VIP guests and 20 students, as well as 160 crew members.

Those aboard will be focused on pushing the scientific study of the world’s oceans to the limits, with the vessel complete with quantum computer technology and Artificial Intelligence. The concept has received support from a number of international partners including IBM, RINA, Triton Submarines and EYOS Expeditions with a projected launch date set for 2025, with the preliminary design and naval engineering already complete.

Named the RTW ², Ruhl explains: “We previously developed the MRTW rig as a wind propulsor suited for larger vessels. With the RTW ² rig, we took the concept even further, breeding it with the articulated two elements thick wing concept. A larger wing mast section and foldable articulated thick sail reduces the compression load in the mast, and unties the two spars in a central pivot. The result is higher aerodynamic efficiency, a lighter structure, and lower required deck space.”

VPLP Design unveiled an all-new state-of-the-art 45-metre trimaran concept in October 2021 at the Monaco Yacht Show. Seaffinity is silent as she is partly automated and propelled by the wind. She has been designed in-house under the direction of Patrick le Quément to emulate the great birds of the sea. Inspired by the lightness, dynamism and beauty of airborne seabirds.

Seaffinity has a muscular exterior styling that mimics that of a bird in flight and has a domed full-beam superstructure to provide guests with heaps of indoor living space. The outer areas are partially covered to give guests a welcome break from the beating sun when they are entertaining out on the deck. This trimaran concept has a truly eco heart as she is equipped with two Oceanwings, a hybrid engine and is said to generate electricity through a fuel cell and hydrogen.