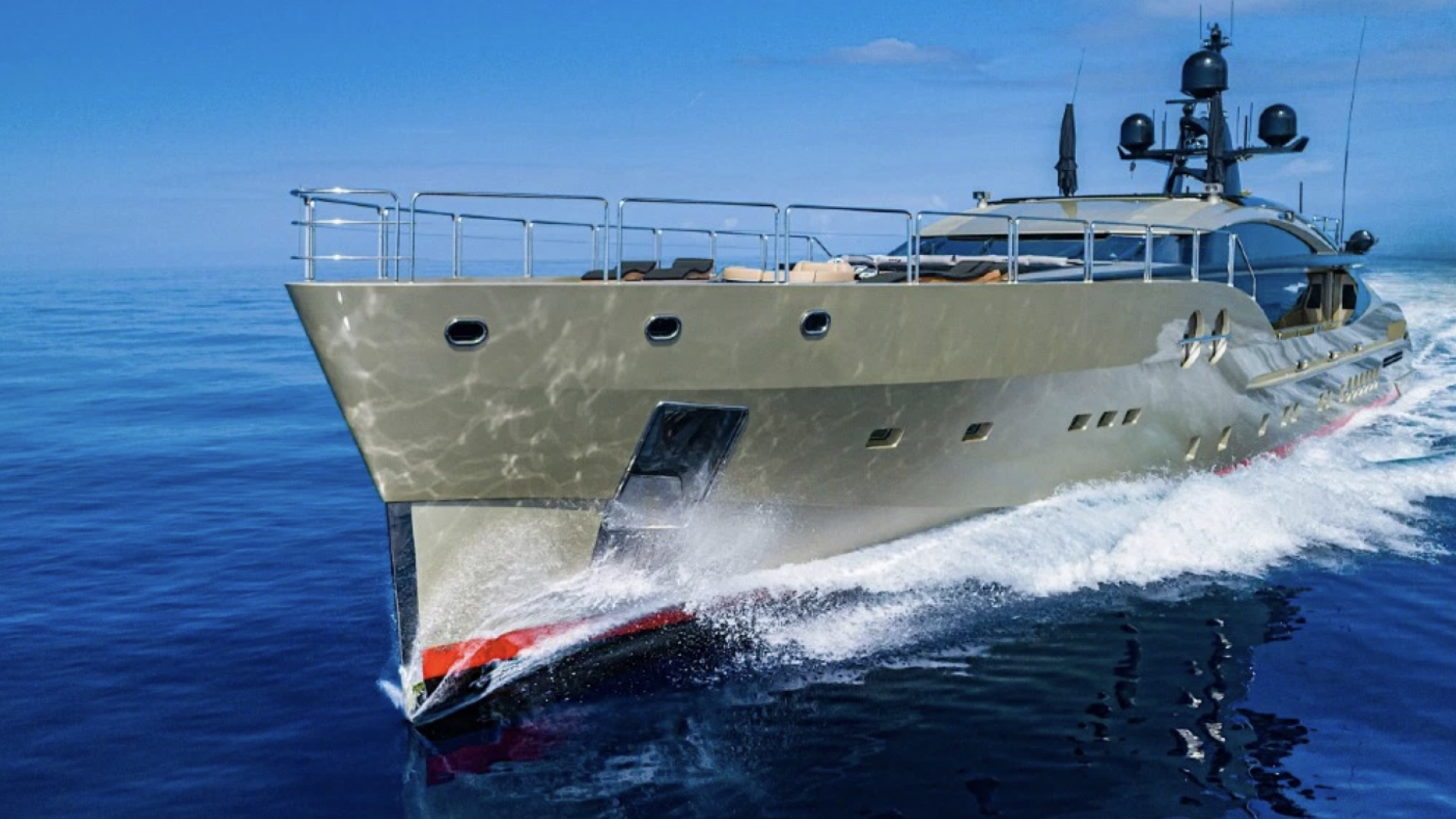 BOAT OF THE WEEK: HOW AN ICONIC 171-FOOT SUPERYACHT GOT NEW LIFRE AFTER BEING UNUSED FOR A DECADE.

Commissioned by a Russian oligarch, then acquired by a Turkish owner, "DB9" sat idle for years. Then its US owner brought it back to life.

It’s just a tad more powerful than the Aston Martin it’s named after. With a staggering 9,200-turbocharged horsepower, this 171-foot speed machine can reach a highly impressive 37 mph, two or three times faster than other yachts its size. Breakfast in Monaco, lunch in Porto Cervo and back in time for dinner? No problem.

Launched back in 2010 and christened DB9 after the classic V12-engined British sports car, it was the first of Palmer Johnson’s iconic PJ 170 Sport Yacht range, and the only one built in England.

Today, DB9 is the pride and joy of American businessman and boat lover, John Rosatti. Maybe you’ve bought a new car from one of his many Plaza Auto Mall dealerships. Or fine-dined at his Vic & Angelo’s Italian eatery in South Florida. Or grabbed a burger at one of his successful BurgerFi joints.

Rosatti bought DB9 back in 2019 a year after selling his much-loved 214-foot Codecasa superyacht Double Down. Before that, he owned the 160-foot Christensen Nice ’n Easy and, before that, the 127-foot Crescent Take it Easy.

At the time, the yacht was languishing unloved in an Istanbul shipyard, a for-sale sign in its window and an €18 million asking price. Rosatti’s car dealer instincts weighed the pros and cons. The cons included pricy overhauls for the yacht’s entire mechanical and electronic systems, plus a re-spray of the hull. The single, but eventually deciding, pro: an iconic boat at a great price.

Rosatti is currently off-the-grid aboard DB9, cruising around the Italian island of Sardinia, so wasn’t available for comment. But Peter Thompson, managing director of Monaco-based Yachting Partners International, and Rosatti’s longtime friend and boat-buying advisor, gave Robb Report a history of the boat.

“DB9 had pretty much been in mothballs her entire life,” he says. “Shortly after launch, she was hauled out of the water and parked on the hard. When we tracked her down in Istanbul years later, she had less than 1,200 hours on the engines.”

The Palmer Johnson was originally built for the Russian oligarch Sergei Pugachev. He was the founder of the MezhPrombank, and a close friend and advisor to Russian President Vladimir Putin. According to published reports, in 2011, a year after he took delivery of DB9, Pugachev was accused by the Russian government of running off with a $1 billion bailout loan given to his bank. His considerable assets were reportedly seized, including DB9, and he fled to England. He’s now living in exile in the South of France.

“A Turkish buyer bought the boat out of receivership in 2016, managed to get it to Istanbul and renamed it Aura,” says Thompson. “But it just sat there and, as we know, boats like these hate not being used. When we found her in 2019, she needed work.”

After the purchase, the boat went into the Dunya Yachts yard in Istanbul for a comprehensive refit. All the systems were upgraded, those mighty MAN diesels were overhauled and the yacht was given a complete re-paint in that polarizing Champagne-with-red-bootstripe color scheme. And the original DB9 name was resurrected.

“Today she’s in absolutely pristine condition,” says Thompson. ”Inside and out, she looks brand new and still turns heads like no other boat I know.”

Some of DB9’s coolest features include not one, but three pools, including a huge 26-foot saltwater pool on the foredeck that, when empty, holds the yacht’s RIB tender. Emptying it takes less than 10 minutes. For alfresco entertainment, the yacht comes with a state-of-the-art outdoor cinema on the sundeck. Belowdecks are five spacious staterooms for up to 12 guests, including a full-beam master.

According to Thompson, the “owner recently decided that he wants to replace DB9 with a larger yacht more suited to world-girding.” So, when the Rosattis are done cruising the Med this fall, it’ll be displayed at the Monaco Yacht Show in September, with a €25 million, or $29.4 million, asking price.

Maybe Rosatti should consider throwing in a champagne-colored Aston Martin DB9 to sweeten the deal.