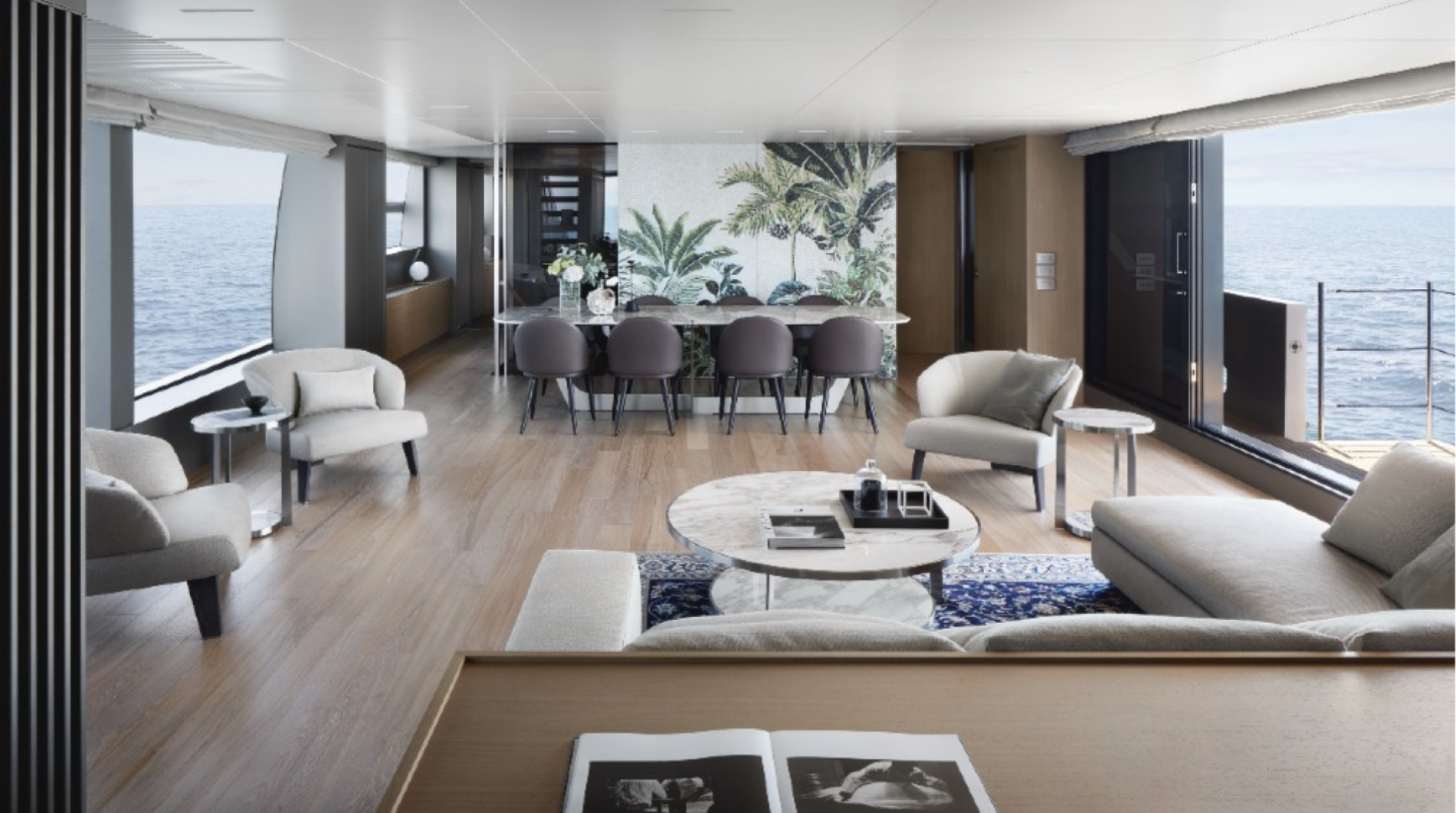 BOAT OF THE WEEK: HOW THIS RULE-BREAKING 120-FOOT SUPERYACHT BUCKS CONVENTION TO CREA AIRY, OPEN SPACES INSIDE.

Symmetry has been a fundamental tenet of boat design ever since Noah built his Ark. This obviously makes hydrodynamic sense below the waterline, but symmetry is less important when it comes to the superstructure. At least that’s what Italian yacht builder Sanlorenzo is trying to convince the yachting world with its brand-new SL120 Asymmetric.

Sanlorenzo has been playing with creative yacht designs over the last three years to update the traditional way of living on board. Robb Report had a chance to tour the new 120-footer at last week’s Cannes Yachting Festival, where it also introduced the SL 90A. The two launches are logical evolutions of the builder’s SL102, which started the asymmetrical trend in 2018.

Rome-based Zuccon International Project designed both interior and exterior, incorporating a “half-wide-body” layout on the main deck. That translates to a narrower space with external passage between the aft cockpit and main staircase amidships. At that point, the yacht becomes a palatial main suite—taking advantage of the yacht’s 25-foot beam—with floor-to-ceiling windows that flood the space with natural light. There’s almost an element of feng shui—the Chinese science of balancing energy through design—with the asymmetric layout.

An exterior staircase, also on starboard, crosses the flybridge and provides access to the foredeck living area. The foredeck can also be directly accessed from the owner’s suite. The designers wanted to maximize that forward space for use, incorporating a dinette with a table. Add a fill-in cushion and it morphs into another sunpad that can be quickly dismantled by crew to get to the anchoring and mooring gear underneath.

The idea is that this unconventional arrangement makes multiple uses of the yacht’s vast interior volume and exterior spaces. Thanks to the design, the asymmetry is virtually invisible when viewed in profile, so it has a seamless, elegant look rather than a cobbled Frankenyacht. “We used asymmetry in a very clear and understandable way,” says Bernado Zuccon, who was also responsible for designing Sanlorenzo’s Bluegame Yachts. “We were helped by having more space to play with, but we also wanted to create a deeper sensory experience between the owners and their guests, and the sea.”

Close contact with the water is provided by sliding glass in the main salon that folds away against the entrance to open up space between interior and exterior. There is another sliding door and drop-down balcony to starboard. The fly deck provides yet more open-air space and alfresco dining, while being shaded by a louvered hardtop.

Martina Zuccon’s interior is contemporary, but also discreet and sophisticated. Thai walnut for both the wall paneling and sole is combined with a metallic lacquered finish for the ceilings and brushed finishes for metal accessories. The neutral tones are punctuated with flashes of color, including a mosaic of green tropical foliage on the dining room bulkhead that slides open to reveal the flat-screen TV. The freestanding furniture from Minotti, Roda and Baxter.

The yacht’s first owner commissioned an all-glass elevator linking the lower and main decks, a huge structural feat for a yacht this size. Guest accommodations on the lower deck comprise four ensuite double cabins that provide accommodation to 10, including the owners.  When the tender and toys are in the water, the garage in the stern doubles as a beach club with a swim platform aft and two foldout decks.

This first unit was powered by twin 2,600 hp MTU engines, which deliver a highly impressive speed of 27 knots (twin 2,400 hp CATs are also an option). At full throttle the yacht has a range of 486 miles, but at an economical 10 knots, the boat’s range is 1,826 nautical miles.

Sanlorenzo took a gamble in 2018 with its first asymmetric hull, breaking the rules of yacht design. But the bet has paid off and its asymmetric lineup now includes four models between 90 and 120 feet. What seemed like a radical departure a few short years ago, now makes perfect sense.