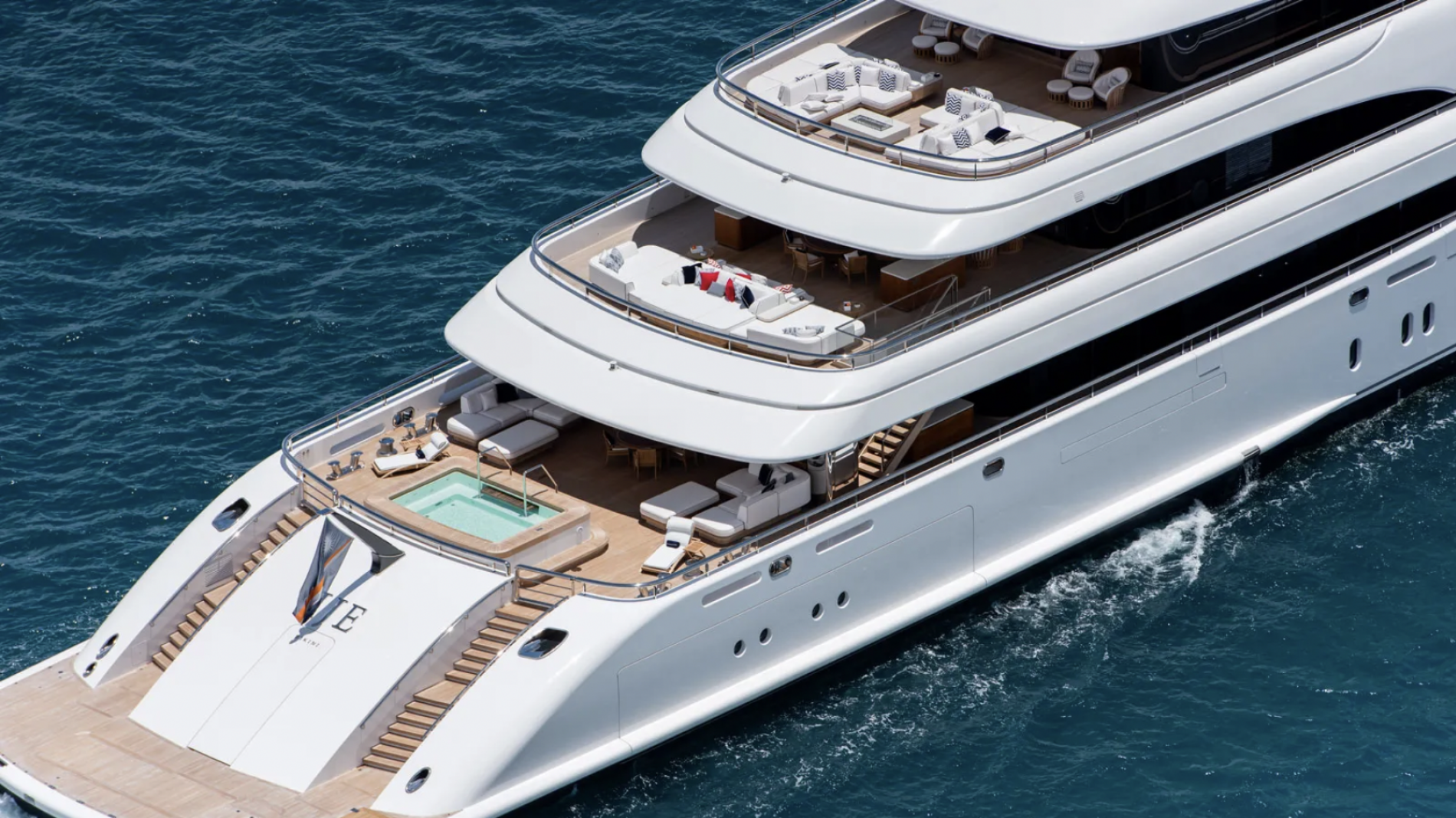 IJE: ON BOARD THE BIGGEST BOAT AT THE MONACO YACHT SHOW.

Beneath her never-ending lines, this elegant yacht has the soul of an explorer. Cecile Gauert catches up with IJE 10,000 nautical miles into her first Pacific journey...

IJE is doing what she was always meant to do: cruising, far away from ports and marinas, in the company of dolphins, blue whales and manta rays. This 108-metre custom creation from British design studio RWD and Italian builder Benetti has the soul of an explorer in a supremely elegant package. She emerged from a blank sheet of paper but incorporates some of her owner’s previous boating experiences, blending the qualities of very different yachts.

“The owner had a fast 50-metre Mangusta and 46-metre Leopard with sleek profiles and appreciates modern and timeless design,” says Christian Power, who is part of the owner’s build team. “He also previously had an explorer yacht and one of its best features was that it could carry a large variety of tenders.” No matter how far the explorer went – and it went as far as the Ross Sea in Antarctica, setting a record for the southernmost journey in 2015 — its tenders always made it possible to reach shore safely.

So, there in essence was the brief: a sleek and elegant yacht that could also carry three large tenders. The new yacht should also incorporate an owner’s deck, a nightclub, a cinema, a gym,  a beach club, comfortable guest cabins and crew accommodation for long sojourns in remote areas of the world. However, the exterior design was foremost on the list. To achieve the desired look, the owner and his team promptly zeroed in on RWD, having seen and appreciated their previous work on yachts such as Vava II. As a bonus, the prolific design studio has had a long and fruitful relationship with Benetti.

“In some boats, you have a brief of what you need to fit in, and then you have to wrap a skin around those needs. This was definitely the other way around,” says RWD designer and team principal Adrian Chisnell. “It became a sculptural design,” he adds, and “the form is pure RWD”.

In order to enhance the silhouette, RWD emphasised the rake at the stern and extended the bow. “The bow goes on for ever. The bow overhang is the longest proportion that we’ve ever done,” he says. RWD insists on purity of lines, so naturally no safety rafts or wing stations can interrupt them. “Everything is flush, everything is behind panels, everything is discreet,” Chisnell says.

That extra stretch of the bow makes IJE Benetti’s new flagship by length, edging by a few centimetres Luminosity and Lana. By volume, however, she is a slim 3,367GT. “The owner understood that you have to sacrifice volume in order to achieve beauty,” says Power.

All yachts of this size stretch boundaries in many ways, but IJE has demanded ingenuity from all involved in order to achieve that delicate balance of style, functionality and comfort for up to 50 people, including 28 crew.

Looking at IJE from a distance, it’s nearly impossible to make out the decks, but from within, the impression is completely different, with large open decks offering all-round views. The superstructure seems like an elegant cloak that shields the interior spaces from view. What contributes in great part to this impression are wide passageways and tinted glass, Chisnell says. Although not obvious at first glance, IJEincorporates 24.5 tonnes of laminated glass with a grey tint that opens up the interior spaces to the environment.

While RWD did the exterior design, Benetti worked with the owner’s team to create the interior. “The main idea the owner wanted to convey was an interior that was in connection with the exterior,” says Benetti interior designer Mauro Izzo.

Nowhere is that more evident than on the main deck. The main saloon opens on all four sides thanks to automated sliding doors and glass panels that let in the ambient air. From a pool overlooking the stern, to the forward bulkhead of the saloon, when the doors are open, it’s 30 metres of uninterrupted open space on a deck that seamlessly transitions from blond teak to oak floor thanks to the absence of a threshold.

“The general idea was to create a relaxing mood and a contemporary, timeless interior that is simultaneously luxurious and without too many visible details,” says Izzo. “In 90 per cent of the boat, the wood is oak with a finish a little whiter than natural oak. The idea for the main deck was to have continuity of materials and avoid corners. So, between the floor and the wall, and between the wall and the ceiling, there is a curved connection made in the same material. This results in a very good sensation. The wood surrounds you; you feel protected,” he says.

The owner’s team brought in RWD to add finishing touches with a few custom pieces,  many made by London-based Hull Studio,  and soft goods that enhance that feeling of soothing comfort.

“A lot of the interior finishes were supplied by the wonderful Loro Piana brand, stunning quality of textured linens, cashmeres and natural fabrics, all soft to touch and hugely luxurious.  A simple palette of white, cream, caramel and navy with flicks of deep reds,” says Polly Sturgess, director of furniture, fixtures and equipment  for RWD.

Forward of the saloon is the guest lift, a feature in itself. It rises five decks, from the tank deck to the bridge deck, acting as a light conduit. Guests seated on the cosy and private observation deck at the very top can get a vertiginous view into the yacht through a large skylight at their feet.  “We were very keen to keep transparency on top of the cabin and the sides of the lift,” says Izzo. Continuing the theme of light are the stairs,  a graceful spiral of open steps with stainless steel details, which appears to float around the lift.  A 16-metre-tall art piece, sourced by RWD, completes the scene.

“London-based artwork specialists DKT worked with Bill Cleyndert to create this jaw-dropping wall feature,” says Sturgess. “The theme was to be elegantly rustic and this was realised using a beautiful hand-carved plaster finish, with a custom rope detail, all brilliantly lit to ensure the feature wall was enjoyed whilst transitioning between decks.” The idea behind the wave patterns in the plaster was to suggest rippling sand in shallow, clear water.

Forward of the stairs and lift are six of the 10 guest cabins with variations on the elegant oak theme. The enormous portholes, shaped like windows on airliners, are streamlined in every aspect. Their shades retract out of view, leaving nothing but clean lines.

“The luxurious aspect is not visible, but you feel it. Every room, every area, has different wood details. We played with materials but not colours,” says Izzo.

The feeling carries into the owner’s deck, which has a cosy lounge and enjoys spectacular views through floor-to-ceiling glass. For the bathrooms, Izzo sourced two oval tubs carved out of a single piece of botticino marble. “The entire interior, including the striking bathtubs, sits on a floating floor, akin to the kind you’d find in a skyscraper,” says Alessandro Lazzerini, senior project manager for Benetti. In the owner’s studio, sound levels at 16 knots are around 40dB, bettering sound-proofing goals.

The interior, including part of the bridge deck, is finished with tanganyika wood, which is on the lighter side. The exceptions are three areas where you’d expect a darker environment: the cinema, the nightclub and the bridge. The striking decor of the bridge is similar to that of one of the owner’s previous yachts, says Power. The technology for the paperless bridge is by Team Italia; the design around the I-Bridge system, including the decor, is by Benetti. To enhance the high-tech feel, Izzo finished the space with black leather and carbon. The cinema is likewise finished in darker colours to ensure a perfect film-viewing experience and it’s fitted with a massive door and absorbing materials such as leather, carpets and soft cushions to prevent any noise from escaping into the adjacent guest or crew cabins. One floor below and equally well insulated  is the nightclub, a fun space decorated with  dark wood, labradorite stone and blue leather. “We have a full commercial set-up, inclusive of  a DJ console, strobe lights and decorative ‘portholes’ [framed screens] with movies of sea life,” says Power.

IJE complies with her mission as a toy carrier with large tender bays forward and a vast garage at the stern. She is equipped with what Power says is currently the largest single-point lift crane installed on a yacht. The tenders themselves, which include a VanDutch 40, sit on a scissor-style lift system that raises them to the surface of the deck. Teak matching the deck covers the sunny side of the crane. In the down position, it doubles as a pathway to the tip of the foredeck, which can be used as an emergency landing spot for a helicopter.

A corridor that goes through the upper level of the engine room provides guest access to the toy garage, the beach club and gym. At anchor it’s  a great space, with large shell doors that provide a platform for yoga with incomparable views. Along with a third tender housed in the garage is a fleet of eight jet skis and a 1,500-litre refuelling station. “Instead of the usual 300 litres, we integrated a sort of helicopter refuelling facility; the concept is the same,” says Lazzerini.

With all its toys and loading and unloading operations, the yacht had to be extra nimble. Captain Ronnie Maclean made the case for the electric Schottel SPJ pump jet, which works with the yacht’s dynamic positioning system. It helps with manoeuvrability and gives IJE the ability to cruise at up to eight knots without firing the main engines. It also helps nudge the yacht in exactly the right position for dinner views or away from chop for exercise time.

After leaving Benetti’s Livorno shipyard in July 2019, 50 days ahead of the estimated delivery date, IJE cruised around the Mediterranean before heading off to French Polynesia – a 30-day voyage to the South Pacific. She’s been travelling ever since, mostly out of sight but instantly identifiable nonetheless.

“Any good design, we think, you should be able to recognise by sketching three lines, and I think you could sketch three lines on this yacht, and you would know which one it is,” says Chisnell. “It has this sort of iconic outline, which makes you stand out from the crowd.”

IJE is a standout, not only for her pure lines but for her engineering, which makes her beauty more than skin deep.