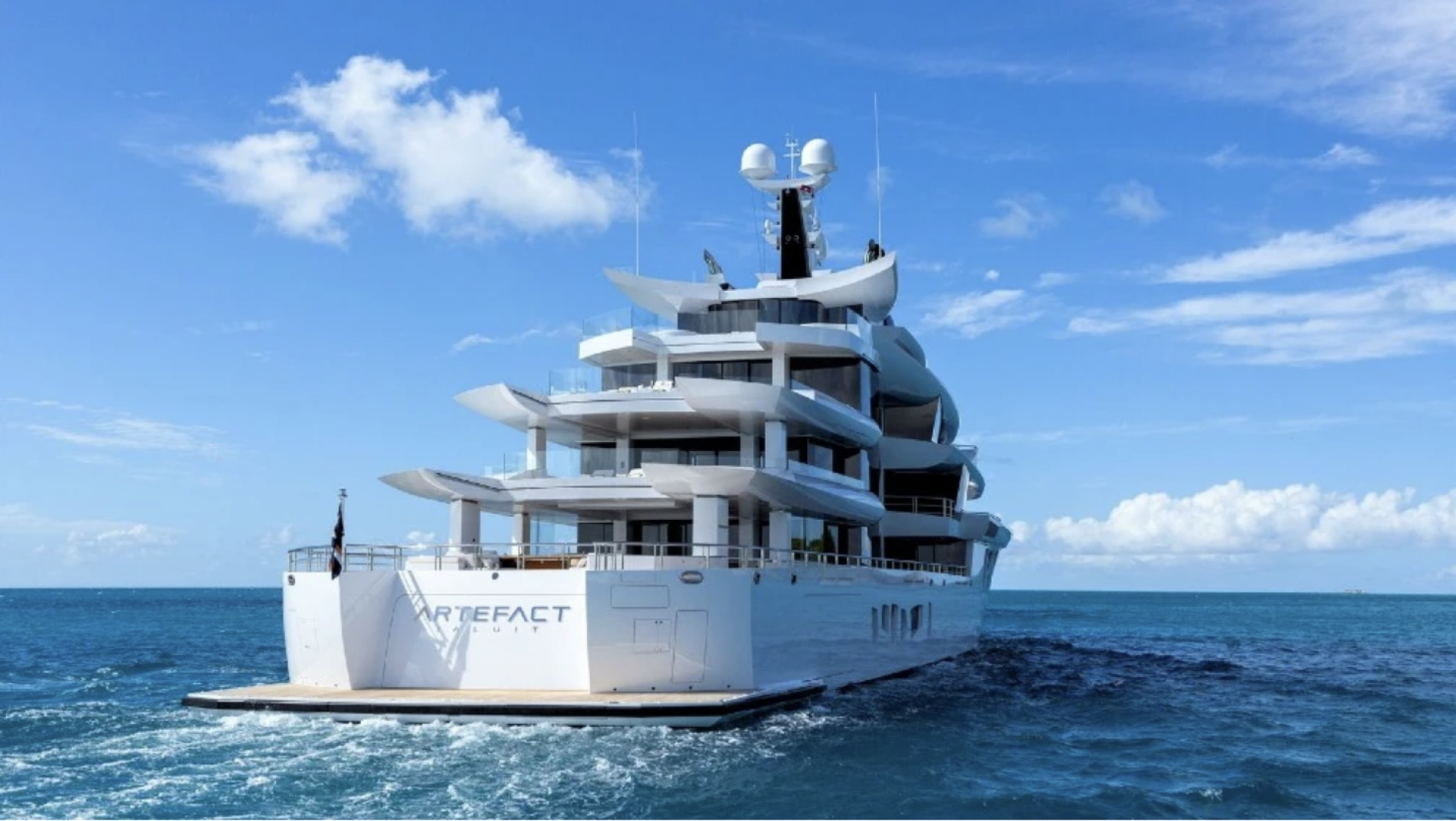 BOAT OF THE WEEK: MEET 'ARTEFACT,' A WHIMSICAL 262-FOOT SUPERYACHT WITH THE MOST SPACIOUS INTERIOR IN ITS CLASS.

The owner plans to make this highly engineered yacht his first and last boat, with a design that can be modified as future technologies come online.

Meet Artefact, a yacht ahead of its time. The exterior’s whimsical curves made this superyacht the toast of last week’s Monaco Yacht Show, but its universal appeal didn’t happen by coincidence.

The world’s largest 262-foot boat (by volume) was meticulously planned for years by her owner, an engineer, and build captain to be a cutting-edge, diesel-electric wunderkind. The futuristic façade and eco credentials have grabbed the headlines, but Artefact’s interior is what may eventually reset the course for future yacht design.

By future-proofing, the owner reflected on the smallest details that would still be relevant two decades from now. No door thresholds and minimal steps for wheelchair access are just a few of the practical design features. Then there’s the Tai Chi room, with added ceiling height to be able to wield a sword above the head. Next came placing the owner’s cabin at the lowest acceleration point on the boat, so the ride would be comfortable. Finally, the owner decided to centralize all service operations to reduce the number of crew.

Clark and the owner spent 18 months developing Artefact before signing a contract together, and another year tank testing and investigating stabilization systems before looking for a shipyard.

“We spent eight months and $110,000 building the family deck level to scale, out of wood and Tyvek construction wrap,” said Clark. “It helped us to figure out how much room the owners need to comfortably live aboard and how big the boat needed to be.”

The answer was bigger, a lot bigger. The original 500-gross ton volume increased to a seismic 2,990 gross tons. “I went to seven shipyards with the plans,” says Clark, “But we ended up with Nobiskrug because they were the only yard who kept the pedigree and design that we wanted from the beginning.”

All the detailed planning paid off. During the build process, the change order was a paltry 1.1 percent—owner-mandated changes during most builds are typically 30 percent. Artefact was delivered in March 2020 to her owner, who plans to live aboard for up to three months at a time. During the pandemic, that increased to eight months, and the boat was not sitting idle in some marina. Artefact went on a mammoth 13,000-nautical mile, nine-month shakedown voyage.

“My favorite piece of technology is the boat’s dynamic positioning system,” says Clark, noting it keeps the boat in place without anchoring. “We used it for 650 hours in the first year, including two weeks non-stop. If the owner is sitting in direct sunshine, I turn the boat a bit. Other times, I change the view. In rough seas, we defuse the waves. It really enhances the guests’ overall experience.”

From the dock, Artefact stands out for her radical geometric shapes and massive windows. The exterior was designed by Gregory C. Marshall, featuring 8,073-square-feet of glass weighing 70 tons. In contrast, the Reymond Langton interior is a Zen-like, clean expanse of space.

“The interior isn’t ostentatious and that’s because you can’t compete with the exterior architecture,” says Clark. “We didn’t try to fight it.”

The amount of onboard glass is a yachting first and didn’t come without challenges. The primary ones being weight, solar-heat gain, optical properties and reflections of sound.

Materials and space are used to absorb sound. In the owner’s suite, with a carpet that feels like crunchy snow underfoot, sound levels average just 36 dBA—somewhere between a whisper and hushed library—when under way. All the windows are made of two panels of bronze glass and one layer of mirror, which cuts heat without distorting views and “makes the greens pop,” according to Clark.

Much has been made of the owner’s request for Artefact to be environmentally advanced. It was the first superyacht to conform to IMO Tier-III emissions standards. It has 248 square feet of solar panels, creating enough electricity to run the lighting at night. But the advanced DC bus digital power management system—the first to be installed on a yacht—allows the vessel to fully integrate multiple sources of power from solar cells, variable-speed generators and lithium batteries.

That means the boat can operate for a limited time without internal combustion engines. It also has the potential to draw on future technologies, such as fuel cells.

“Artefact is designed for the future. So, if we want to change an engine to a new technology, the system is in place with the DC bus to enable that,” says Clark.

For many superyacht owners, being identifiable on the water is something to be avoided at all costs. But not Artefact. “You can’t do something different and stay hidden,” says Clark. “If you’re going to set trends, you need to be recognizable. Not just technically, but with the owner experience as well.”

Since Artefact‘s eco-credentials have been widely discussed, the conversation has moved to the interior and exterior. “We felt the styling might overwhelm the true core of what the boat was,” says Clark. “Now, we’re highlighting the design. I think that was a good strategy.”