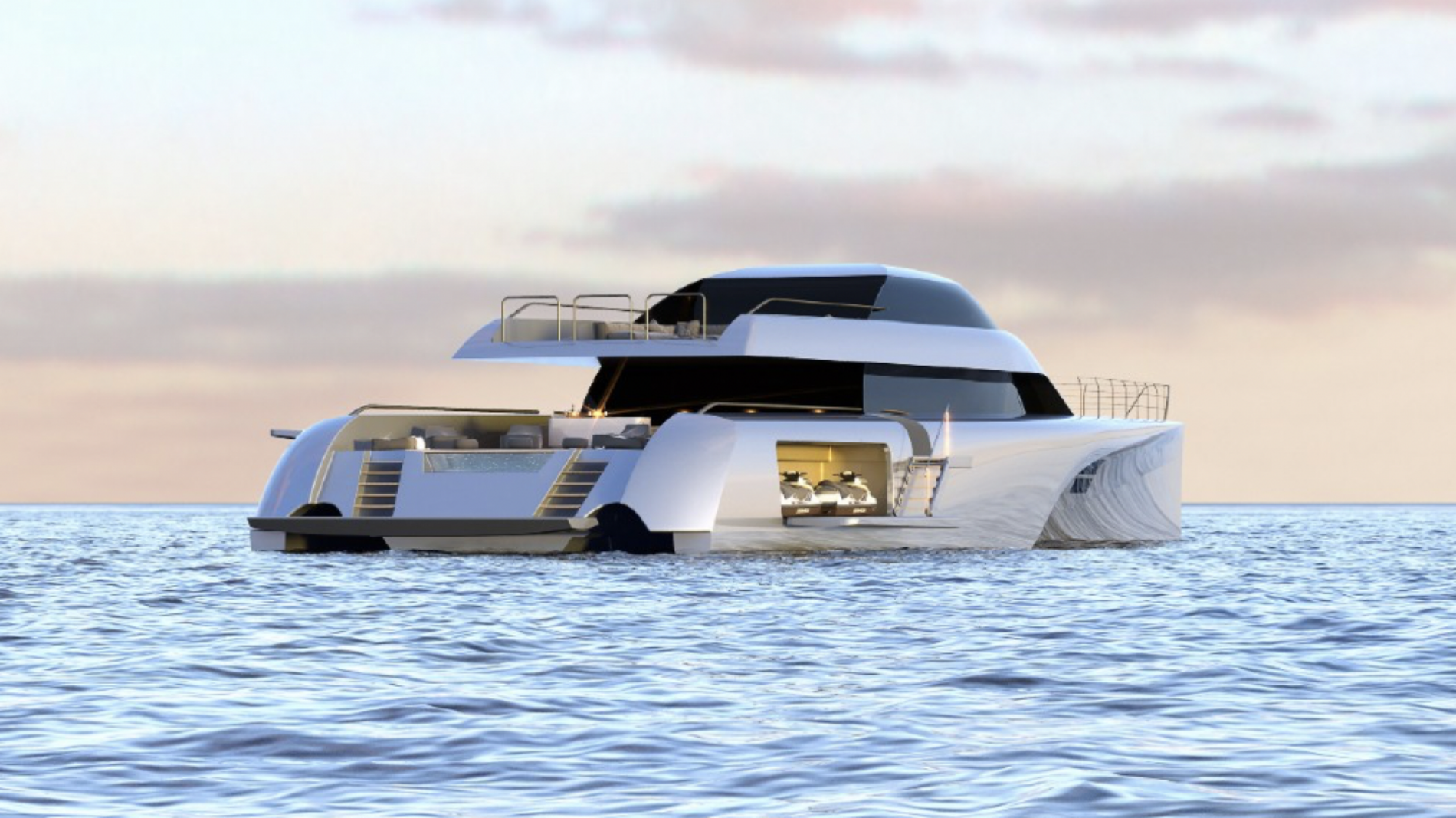 BOAT OF THE WEEK: THIS SLEEK 153-FOOT TRIMARAN CAN CROSS THE ATLANTIC ON A SINGLE TANK OF GAS.

Why stick with one hull for your superyacht when you can have three? Single-hulled superyacht, or triple-hulled trimaran? To Mark Evans, there’s no contest.

It follows in the wake of McConaghy’s first power trimaran venture, the razor-bowed Adastra. Described by some as “the world’s most beautiful boat,” it came out of McConaghy’s Zhuhai, China yard in 2012.

Fast forward nearly a decade and there’s a family resemblance that borders on deja vu. But one can also see the major differences between the two yachts. MC155 doesn’t have the sci-fi look, but could be mistaken for a conventional—albeit stylish-—monohull.  “It’s all about increased efficiency,” Evans told Robb Report, referring to the hull design. “The drag coefficient is so low with MC155 that the running costs would equate to a monohull half the size.”

For the MC155, powered by a pair of muscle-bound, 1,380 hp MTU turbo-diesels, it would mean an impressive top speed of around 35 mph. Throttle back to the 14-mph cruising speed would deliver a range of over 4,500 miles—that’s Miami to the Med—on one tank. MC155’s hull has been tank-tested in Germany in the equivalent of 18-foot seas. Plus, its five-foot draft allows it to negotiate the skinny waters of cruising grounds like the Bahamas.

“Even compared to a similar-sized, twin-hulled power catamaran, MC155 would offer advantages in fuel efficiency, speed and running costs,” says Evans. “And that 36-foot beam means finding a parking space in a marina would likely be easier.”

Then there’s the style element. At a time when many younger superyacht buyers crave unique, head-turning looks, the bold, dramatic lines of MC155 stand out. As they should, coming from the drawing board of Mani Frers, grandson of the legendary Argentinian yacht designer, Germán Frers.

From that sleek, slender vertical bow, to the Star Wars-like wing design of the outer hulls, to the uncluttered, sweeping lines of the superstructure, the MC155 is a head-turner. “The integration of the outer floats into the main body has allowed us to utilize the full beam to provide a really spacious interior,” says Frers, whose body of work includes the legendary 85-foot maxi race yacht Boomerang.

Frers’s bold design for MC155 envisions the entire top deck as an owner’s suite, with a forward-facing bedroom offering 180-degree views and featuring oversize closets, a gym and lounge area with glass doors opening out on to a huge private terrace. The terrace is so big that it can double as a touch-and-go helipad.

On the main deck, the full-beam lounge and dining areas capture the indoor-outdoor vibe by flowing seamlessly out on to the vast rear deck. Astern are an outdoor cocktail bar, a multitude of sofas for chilling, plus an infinity-edged Jacuzzi pool with steps leading down to a deployable swim platform.

Belowdecks in the main hull are three spacious en-suite cabins, while those slender outer hulls are wide enough to accommodate all the must-have nautical toys.

In the port hull, a dropdown door reveals a space big enough for a 21-foot RIB, while the starboard hull opening can stow a couple of jet skis, plus kayaks, Seabobs and paddle boards.

The interior design of MC155 is the work of the UK’s Design Unlimited, though Evans says that in its pre-build phase, the finer points of the layout, interior fixtures and fittings would be choices for the future buyer.

Same with the propulsion system. While the big MTUs will provide ample power, an owner might want some form of battery system and electric motors, to allow the yacht into environmentally sensitive areas with zero emissions.

The original plans for the trimaran, says Evans, were put in place two years ago when a buyer commissioned the yacht. After investing heavily in the development, he pulled out when his business changed. “MC155 is so much more than a concept,” he says. “Over two years of development so much work has already gone into the design and engineering. That means a dramatically reduced build period. We’re thinking two years start to finish.”