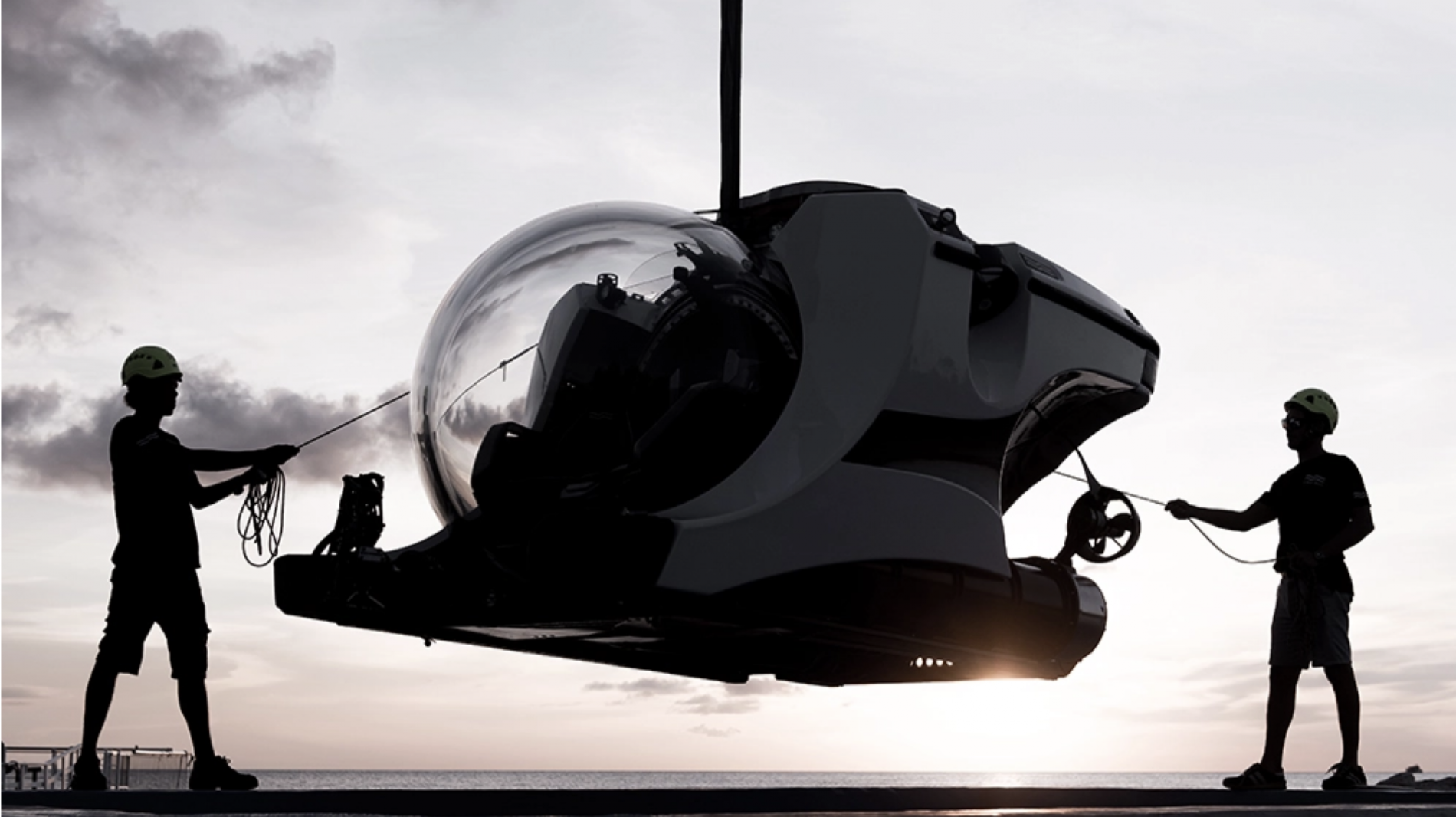 DEMAND FOR PRIVATE SUBMERSIBLES IS SOARING. HERE'S WHAT IT'S LIKE TO TAKE ONE ON AN UNDERWATER DIVE.

You haven’t been truly underwater until you’ve explored the ocean’s depths in a submersible.

What a thing, to be in a submersible for the first time, separated from reef fish and gin-clear water by nothing more than a few inches of acrylic. Inside the three-person Triton 3300/3 there’s a complete 360-degree line of sight, making it hard to discern where the transparent sphere ends and ocean begins. It’s unexpectedly roomy—not to mention the comfortable seats and crisp air—with unobstructed views up front, underfoot, overhead, even through the pilot’s seat in the rear.

Just minutes earlier I’d been aboard the U Boat Navigator, a dedicated dive vessel, bouncing in lively seas off Malta. A pair of submersibles—a one-seat Triton 3300/1 alongside the three-seater—sat on the foredeck. “A sub is not a toy,” Tom Hutton, Cookson Adventures’ director of operations, told us. “It’s a means of exploring an alien environment.” Capable of diving to 3,300 feet, the Triton is a popular choice among researchers and documentarians, including the crews who made the BBC’s Blue Planet II and Great Barrier Reef with Sir David Attenborough.

As we descend toward the hull of a sunken German WWII patrol boat, Hutton’s term “alien environment” comes alive. The feeling is otherworldly, both thrilling and peaceful. At 82 feet down, sunrays shimmer off the seafloor and the wreck swarms with fish and divers. It’s surprisingly quiet inside the sub, nothing but a soft mechanical whirring as pilot Dmitry Tomashov alternates between navigating around the vessel and hovering above the ocean floor. On the foredeck, the nearly 18,000-pound sphere seemed large and unwieldy, but the Triton is at home underwater, gliding with precision as Tomashov steers from a central console. Claustrophobia, which I had feared, never materializes. After 45 minutes, we ascend from the dreamlike state back to the surface.

After such an incomparable experience, it’s no surprise that demand for private submersibles is soaring. Yacht owners are building boats with room enough to store a mini-sub—sometimes two—and they’re a feature on many cruise ships. But they’re expensive machines: The 3300/3 costs around $3.8 million, while the Super Yacht Sub 3, from competitor U-Boat Worx (which I had test-dived two weeks prior) is closer to $2.9 million. Many owners keep them not just for fun, but as research vehicles for archaeological dives and for the discovery of new marine species.

Barbara van Bebber, one of a handful of female sub pilots in the world, has spent hours underwater with scientists. Near U-Boat Worx’s pilot-training facility, in Curaçao, she took me on a 90-minute dive to 500 feet in the Super Yacht Sub 3. As in Malta, visibility in the clear Caribbean water was excellent, though the Sub 3’s fighter-jet-like cockpit restricted rear views. At 500 feet, we were brushing only half of the sub’s depth rating.

The sun’s rays were still visible 130 feet down; at 230 feet, we cruised past volcanic lava reefs awash with vibrant coral whips. A barracuda loomed into view before disappearing into the darkness in pursuit of a large shoal of fish. “Too fast for us,” van Bebber said, noting that the sub tops out at three knots. She was navigating with joystick controls, a feature the Triton doesn’t have, which allows her to hand over steering to passengers.

At 574 feet, the ocean floor looked like barren desert, tranquil and eerie. In that dark expanse, illuminated by only our lights, we kept in constant radio communication with the surface. Van Bebber’s considerable experience kept any worry at bay—as did the Sub 3’s Deadman’s Switch, a safety system that automatically initiates ascent unless acknowledged by the pilot every 10 minutes.

My day with U Boat Navigator’s Triton 3300/3 came about as part of Cookson’s charter aboard Lady in Blue, though the company can set up custom charters on other superyachts around the world with submersibles. For about $41,000, Malta-based U Boat Navigator also coordinates piloted sub day trips to other charter yachts. But there are other ways to experience submersibles besides access to a very large boat. U-Boat Worx offers several courses at its pilot-training facility, ranging from a one-day, $4,700 course with classwork and three dives to a 16-day Chief Pilot Course for about $35,000.