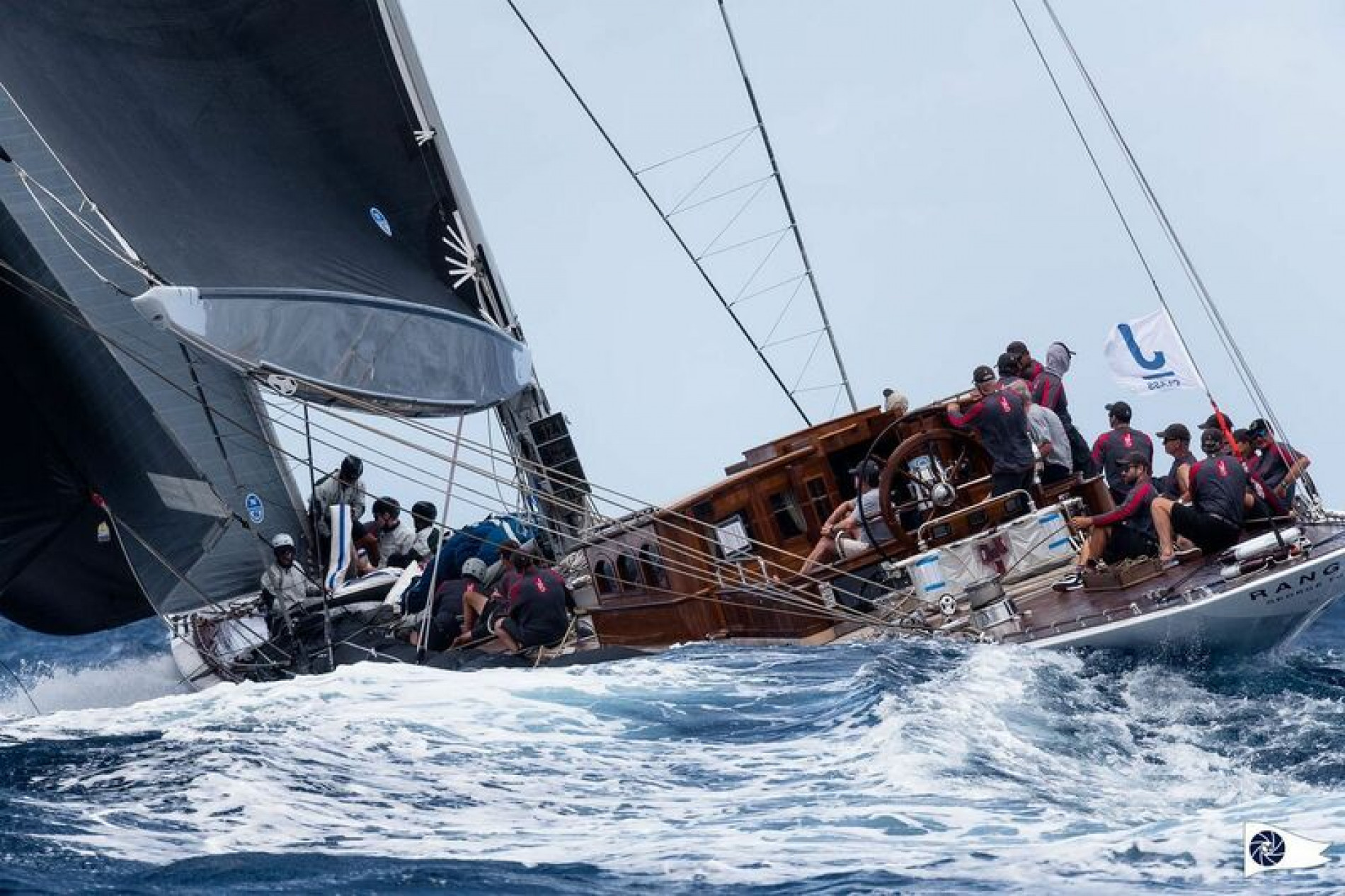 Last Saturday (19th March) saw the third day of racing at one of the world’s most prestigious four-day regattas, St Barths Bucket Regatta. The sailors had plenty of time to mentally prepare for the course as winds gusting over 25 knots led to a delay of two hours for the events to begin.

The day’s racing saw two classes, the Grand Dames and L’Esprit, sail the same 18.4 nautical miles clockwise around and through small islands and rock groupings on the west and north side of the island of Saint Barthélémy. The other five classes, Les Gazelles, Les Elegantes, Les Mademoiselles, Les Petites Dames and J-Class also sailed a similar route but with some longer legs to stretch the trek to just over 23 nautical miles.

Thankfully the wind conditions had improved to a cool 17-18 knots for the first pursuit start at 1:30pm for the L’Esprit Class. But the wind then whipped up again to 30+ knots when strong winds and sideways rain hit in the vicinity of the islands Ile Fourchue and Ile de Boulanger. That was when many in the fleet were embarking on their second downwind leg of the race.

“We saw that squall coming,” said Jonathan Carter, captain of the 27.7-metre Nautor’s Swan sloop Freya in Les Petites Dames class, “and felt we were in front of it enough to fly our spinnaker.”  The team hoisted in 22 knots, did a quick jibe, and when the wind hit 32 knots and the boat speed reached into the 20s, they decided it was time to douse. The team including owner/driver Don Macpherson and Volvo Ocean Race veteran Kimo Worthington who called tactics, managed to stay well in sync which led to a win in this race. “We hit all the lay lines; only had three tacks on the first beat; and hugged in close behind the island, which gave us an advantage. The foredeck crew did a great job despite us putting them in some tricky situations.”

Other class leaders from Friday’s race that maintained their positions on Saturday were the defending overall and class champion Hetairos, the 59.9-metre Dykstra Naval Architects ketch, in Les Gazelles; defending class champion Aquarius, the Dykstra ketch, in Les Elegantes; and Ranger, the 41.63-metre Burgess sloop, in J-Class.

The 43.5-metre Starling Burgess schooner Columbia in the L’Espirit class, dropped from first overall in Friday’s race to second place after finishing third in Saturday’s race. This led to the 29.3-metre Frers sloop Symmetry going on to lead in L’Esprit class on merit of a 2-1 scoreline.

The final day of racing on Sunday saw just as much drama as the previous day’s events! The strong winds in the water led to one hour delay for the proceedings of what was to be 30 pursuit starts for the superyachts competing at the 35th edition of St. Barths Bucket.

The J-Class boats started, only to have their race abandoned after a few short legs on the “Wrong Way” race around the island. The winds were exceeding 25 knots and reaching battering highs in the 30s on the far side of the island. The race committee then made the difficult decision to abandon the racing for all other classes before they had even started.

With that, all the scores from Saturday’s races served as the final results for the regatta. The winner in the J-Class was the refitted 41.63-metre sloop Ranger, who was new to the event as well as her skipper Ed Baird. He described the entry as neither favoured nor an underdog. “I would have to say we were ‘unknown,’ since the boat had not sailed in five or six years; we had a major refit; and the class rating rules recently changed.”

Ranger had a winch fail on the first day that left it with a disability to overcome, however, the other J-Boats suffered their own mishaps. “When all the J-Boats were together, Ranger was typically pushed out the back just a bit, so it gave us the opportunity to stay out of the fray. The important message, though, is that these boats are just spectacular, and it’s exciting to have them racing here.”

Although, she was not the only first-time entrant as the Les Grand Dames des Mers saw Rosehearty’s skipper Paul Goodison give the regatta a go. He is notably an accomplished small boat sailor and Laser Olympic Gold Medalist as well as a three-time Moth World champion. “First time at the Bucket, first time in St. Barths, and first time on a Perini,” said Goodison. “It was a real eye opener to do something different from what I’m used to. The key to our success was three good days of practice beforehand. We identified some problems and came up with solutions and had a great game plan going into the regatta.” The 56-metre Perini Navi won both races in her series and also won her Les Grandes Dames des Mers class in 2019, the last time this event was sailed.

The L’Espirit de Mer series saw the 39-metre Frers sloop, Symmetry finishing with a 2-1 win. The Corinthian Spirit class gives owners an option of sailing without spinnakers and ensures a more relaxed approach to enjoying all that a superyacht regatta has to offer. “The second day was most exciting with the squall and a dash to the finish, neck-and-neck with (second place) Vijonara,” said Symmetry’s owner Abbot Brown. “The biggest determining factor to our success was the crew work, sail handling and tactics, as well as some local knowledge from the St. Martin and St. Barths crew who joined us. This was Symmetry’s tenth Bucket, and the communication from other boats in close quarters is the best we have had.”

In the most performance-oriented class, Les Gazelles des Mers, the defending and overall champion Hetairos proved she still has what it takes to win. The 59.9-metre Dykstra ketch finished with a 1-2 score line and topped her three-boat class and for a second consecutive time meaning she took home the overall Hermès Bucket Trophy. Hetairos also claimed the Best Starter award for executing the best starts.

“We have an awesome team that has been together for a long time, and every day that we go sailing we grow in confidence and push a little harder,” said Hetairos Captain Graham Newton. “Taking the win over two boats (Leopard 3 and Nilaya) that are so well prepared and so well sailed is very satisfying. They certainly don’t give us any breathing space, and you can see from the results that any boat in our class can win on their day.”

Those in the Les Mademoiselles des Mers series were upset that they did not get to race for the day. Tom Whidden, tactician aboard the 34-metre Sparkman & Stephens sloop Kawil that finished first said that not getting to race today was disappointing, but it was a smart decision by the organisers to cancel. “It’s not the ending we wanted, but it’s the results we wanted, so how are you going to do better than that?”

The Les Elegantes des Mers series saw the Dykstra ketch Aquarius repeating her 2019 victory in the class. “It was rather anticlimactic today, but given the conditions and the breakage yesterday, I was rather relieved,” said Aquarius’s Captain James Turner. “We had a good class of similar size and spec ketches. Meraki was our closest competition. We were faster off the wind, but we were head-to-head upwind.”

Finally, Freya was the overall winner in the Les Petites Dames series, a first-time class for smaller boats in the 27-metre range. The 27.7-metre Nautor’s Swan sloop has raced at St Barths Bucket twice before. “It’s a good thing to have a specific class, since we are so different from the big Bucket boats,” said her Captain Jonathan Carter. “Hopefully we’ll attract more boats in the future and get to five or six boats.” Carter said a contributing factor to his team’s victory was that the crew had been together for 10 years; the other boats were newer teams with new owners.

The events of the weekend were celebrated at a rambunctious award ceremony on Sunday night. “It’s hard to wrap your arms around the fact that it’s been three years since we all had the great pleasure of being here together to experience the spirit of the Bucket,” said Race Director Peter Craig. “To be here on this beautiful island celebrating the return of the Bucket helps us all refocus on all that is good and the better days ahead.”