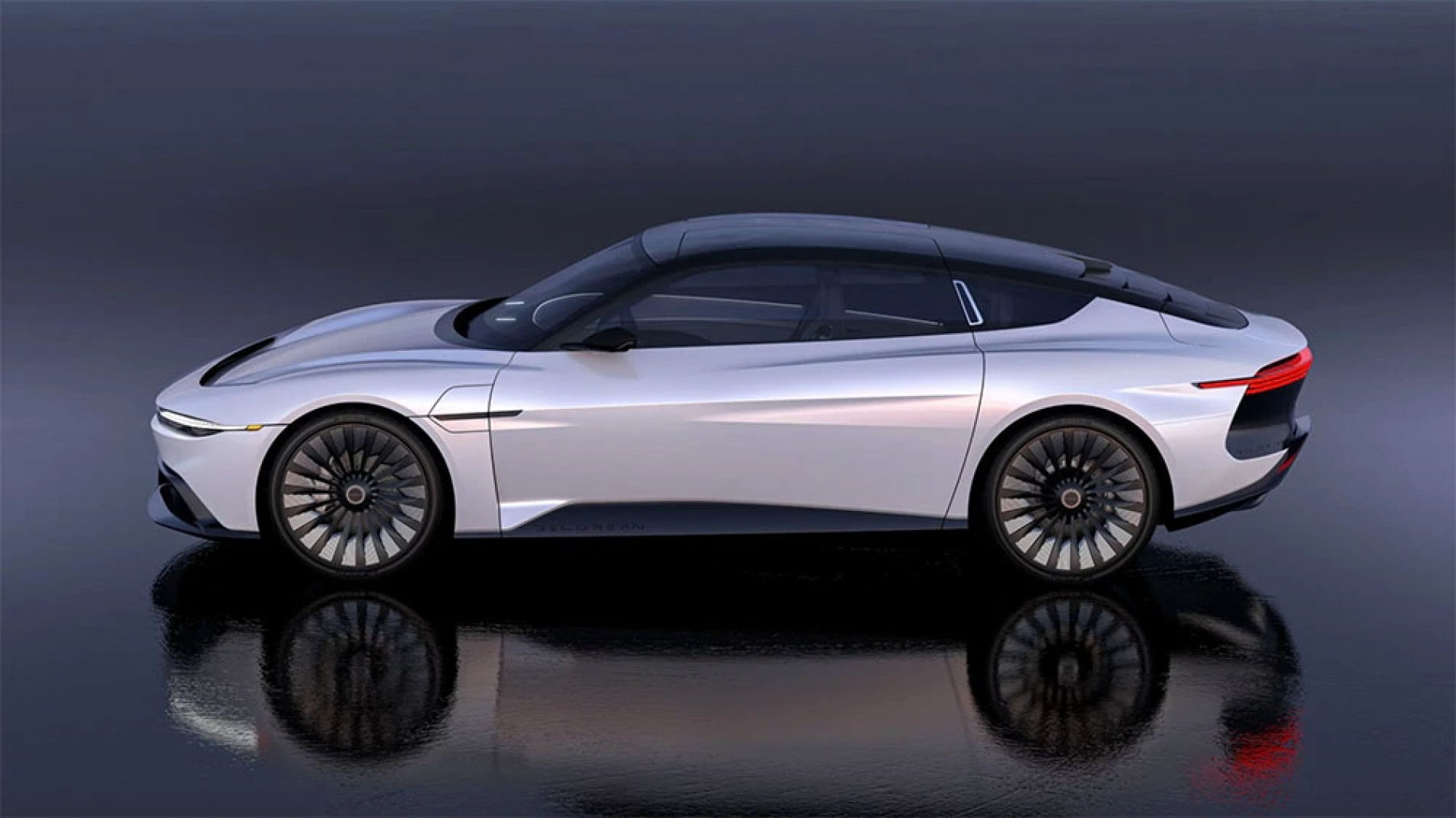 FIRST LOOK: THE CURVY NEW ALL-ELECTRIC DELOREAN HAS NO TIME FOR WEDGE NOSTALGIA

DeLorean’s electric future is looking more promising by the day.

The reborn automaker celebrated Memorial Day by offering up the first real look at its upcoming EV, the Alpha5. The battery-powered sports car looks radically different from its four-decade-old predecessor, but the two vehicles share one very important feature: a set of giant gullwing doors.

The DeLorean DMC-12 may have only been in production for just two years but it’s easily one of the most memorable cars from the latter half of the 20th century. The main reason is its very prominent role as Marty McFly and Doc Brown’s time machine in the Back to the Future movies. Just as important, though, was its design. The coupé’s angular lines and outrageous doors helped turn it into an object of fascination for generations of car lovers.

The new EV, which is born of a collaboration between the reborn DeLorean and Italdesign, is anything but angular. It has a smooth curvaceous shape that puts it in line with many of today’s EVs, like the Porsche Taycan. It’s a striking and modern design, but it doesn’t look much like the car that put the automaker on the map except for a few details. Those elements—the sloping roofline, rear window louvers and, most notably of all, the gullwing doors—will be what makes the difference for some EV buyers.

The modern feel carries over the cabin. DeLorean seems to have modeled the interior on a grand tourer so there’s plenty of room, though a second row means a flux capacitor might be a tight fit. Up front, you’ll find a streamlined dashboard with a sizable digital instrument gauge cluster positioned just behind the steering wheel. A portrait-oriented touchscreen infotainment system sits atop the center stack.

While we have a pretty good idea of what the EV will look like, DeLorean is being a little coyer about its powertrain. The company says it will be able to sprint to 60 mph in just under three seconds and top out at a top speed of 155 mph, both of which are very respectable figures. The automaker also said that the drive unit’s 100-plus kWh battery pack should give it a range in excess of 300 miles. That may be a ways off the 520 miles promised by the Lucid Air, but it’s better than some of the car’s peers have managed off the starting line.

“We have been given the opportunity to re-imagine a brand that has meant so much to so many people from all corners of the globe, for four decades.” Neilo Harris, DeLorean’s VP of brand and creative, said in a statement. “DeLorean has touched so many lives and set the stage for so many memories … we are all now witnessing a new chapter of this amazing story.”

Although questions still remain, we should have our answers about exactly what the Alpha5 will be able to do soon. After confirming the car’s existence earlier this year, DeLorean has said the EV will make its public debut at Pebble Beach this August. Of course, if you’ve already seen enough, you can reserve yours now through the company’s website.