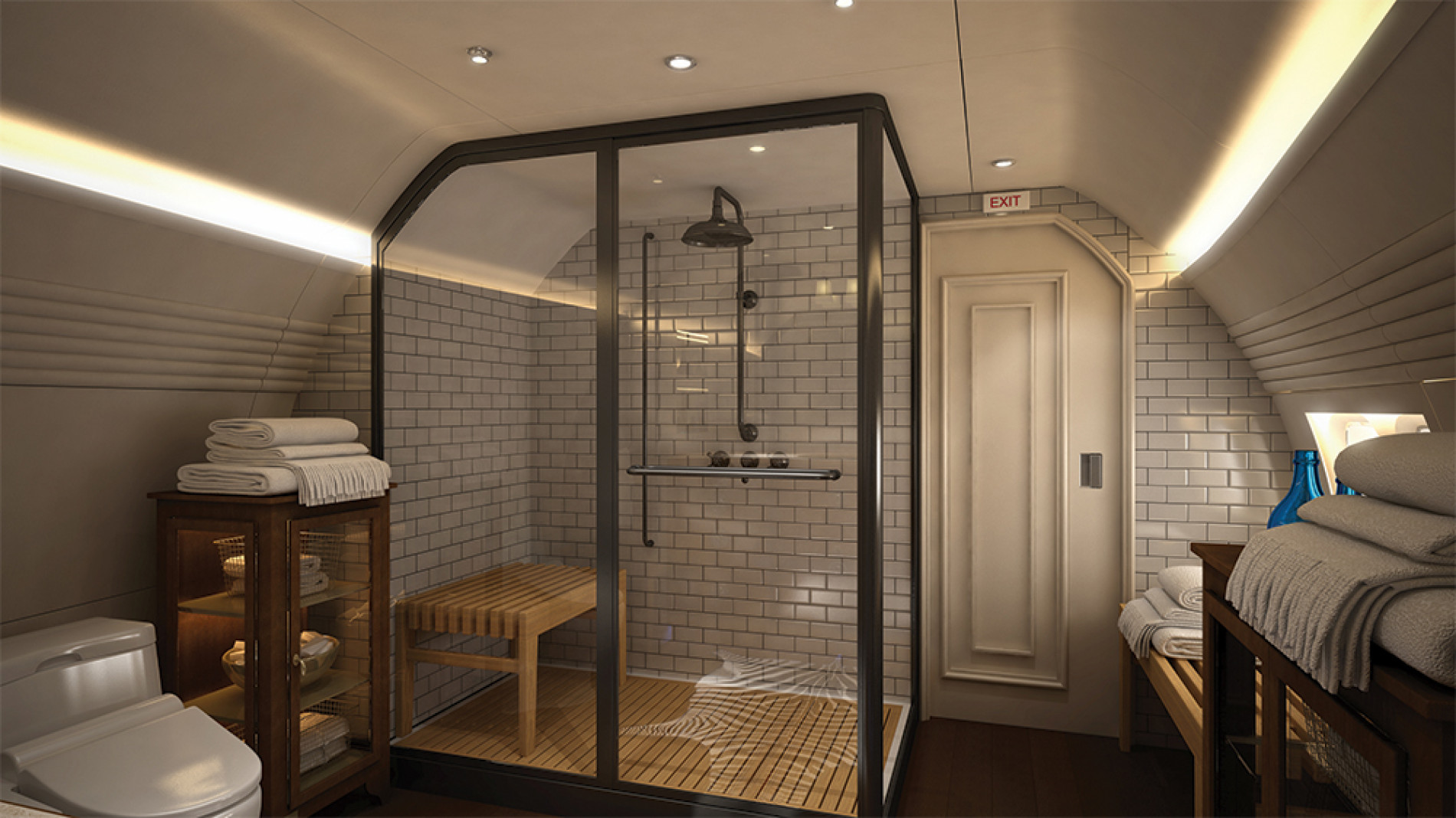 Cabin size and comfort level have become as critical as range and speed—and it’s a game of inches.

After the aircraft is delivered with its “green” (that is, empty) interior, Aloft begins the cabin completions, a process that can take thousands of man-hours. And while the BBJs seem to have acres of available interior space, Hill compares his team’s challenges to those involved in designing a tiny home: Both share strictly defined dimensions that force designers to think creatively. Increasing usable space is often a matter of inches, so figuring out the smartest way to utilize every area becomes the most important consideration. “We’ve always prioritized building multiple capabilities into smaller spaces, to make each area more efficient,” Hill says.

For example, if an owner wants both an office and a guest bedroom in limited space, Aloft will try to puzzle a design together. Hill lists possible solutions: “Can we create a desktop that’s stowable, have seats on tracks that form a queen-sized bed or even leverage a Murphy bed?”

Supersizing interior space has become just as critical in smaller jets. “I’m of the opinion that interiors sell airplanes,” Bombardier CEO Éric Martel said at a recent business-aviation conference, pointing to a mockup cabin of the new super-midsize Challenger 3500. He pooh-poohed the notion that range is the most important factor, instead calling out comfort and smart use of space.

Though they share the same fuselage, the revised Challenger is more than a refresh of the last-gen 350. “We streamlined the monuments and carved out as much volume as possible from our Nuage seating, even sculpting the backrests,” says Adrian Goring, Bombardier’s senior industrial designer. “Wherever we could, we saved volume to add open space.”

At Gulfstream, multifunctionality has become a mantra. “If you could have [multiple] zones offering exceptional experiences—two, three or even four—it won’t be a game of size anymore,” says Tim O’Hara, director of design innovation. “It will be about the quality of the cabin experience.” Gulfstream’s flagship G700 features tables that slide across the aisles to form a large dining area and surround-sound technology that creates a wall-less cocoon around the entertainment space. In the new G400, the seats convert into beds, and the designers engineered the storage compartments behind the seats to allow them to lie fully flat.

“These days, owners are concerned more about lifestyle in their designs,” says Arnaud Martin, chief strategy and corporate development officer for Zurich-based Comlux, which recently took delivery of the first of 15 ACJ TwoTwentys for interior completion. “Just a few years ago, most owners wanted custom interiors with as many rooms as possible. Now they want private areas to sleep or work, but at the same time, larger social areas with more open space.”

The ACJ TwoTwenty, based on the commercial Airbus 220, has significantly more interior volume than purpose-designed business jets such as the Gulfstream G700 or Bombardier Global 7500, but with less range, altitude and speed. ACJ president Benoit Defforge believes more owners will accept those tradeoffs if it means having, say, a spacious bedroom complete with a king-sized bed and a seven-foot rain shower. “Why engage in the race for range if you can fly comfortably for 12 hours and still be intercontinental?”