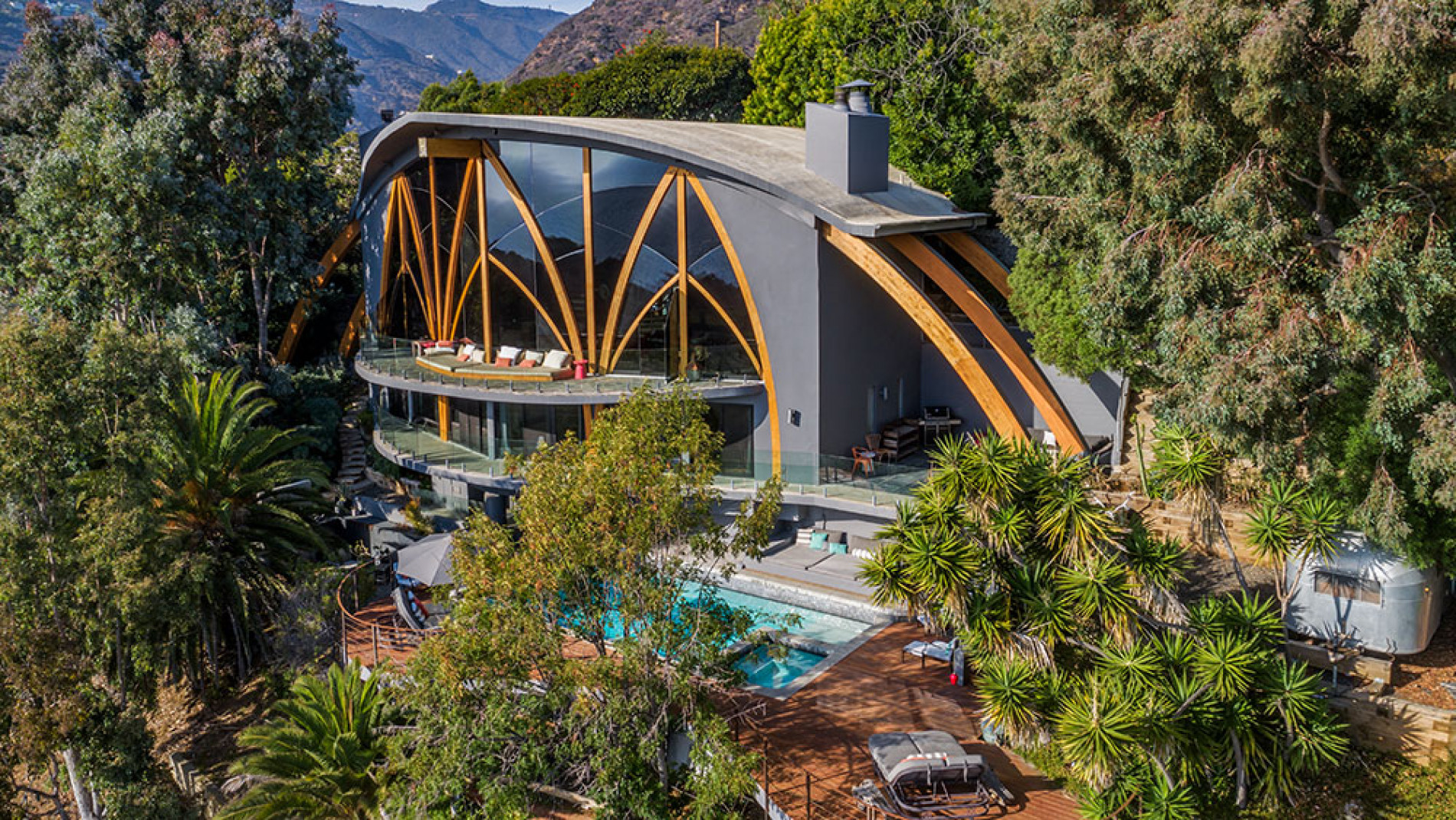 HOME OF THE WEEK: THIS FUTURISTIC $9.5 MILLION MALIBU HOME COMES WITH ITS OWN VINTAGE AIRSTREAM

Cruise along California’s Pacific Coast Highway, through celebrity-rich Malibu, look up, and it’s hard to miss this jaw-dropping architectural gem perched high on the hillside.

Gesner created the house in 1997 for American playwright Jerome Lawrence after Lawrence lost his home in the devastating 1993 Old Topanga fire north-east of Malibu.

The self-taught architect—he’s a still-dashing 96-year-old—was at the height of his career when he designed the home. The architect had just completed the iconic Wave House on Malibu’s Nicholas Canyon Beach in 1957—it’s said to have inspired the Sydney Opera House—and the Flying Wing House in the Hollywood Hills in 1975.

Legend has it that Gesner sketched the polarizing shape of Ravenseye with a grease pencil while straddling his beloved surfboard just off Malibu’s Las Flores Beach, looking up at the empty homesite.

Sitting on a wooded one-acre lot, the house was built using steel-wire panels sprayed with concrete to withstand fire and earthquakes, with support from those wooden buttresses set deep in huge concrete blocks.

After Lawrence’s death in 2004 and the house having fallen into semi-disrepair, it was purchased in 2008 by British businessman and current owner Gavin Cain for $3.9 million. Wanting to restore it to its former glory, Cain commissioned Harry Gesner himself to oversee a major makeover.

“It was in pretty bad shape with some of the key design features completely changed,” listing broker Dustin Nicholas, of The Nicholas Property Group tells Robb Report.

“The owner wanted the exterior brought back to original and the interior modernized, and Mr. Gesner agreed to help. I think it was one of the architect’s last major projects,” explains Nicholas.

Turn off Pacific Coast Highway on to Las Flores Canyon Road, climb the hill and take a right on to Las Flores Mesa Drive, and a driveway leads up to the Ravenseye’s dramatic front entrance.

Arched wooden beams, shaped to resemble the front-end of a surfboard, lead to the home’s grotto-like entry with its rustic wooden front door.  The door opens on to a stone-tiled mezzanine floor with its sensational,180-degree views of the crashing Pacific and the Malibu coastline.

A grand, steel-balustraded staircase leads down into a vast great room below. Highlights include that 30-foot-high curved wall of glass, the soaring, vaulted wooden ceiling, and a huge, arched brick fireplace.

“The area where the grand piano sits now is where the Rolling Stones reportedly did a jam session during one of the many wild parties held at Ravenseye,” says Dustin Nicholas.

The home itself covers 4,170 square-feet and currently has three bedrooms and three bathrooms. The breezy kitchen, which was enlarged and modernized during the Gesner makeover, features a poured-concrete sink and commercial-grade appliances.

Doors from the great room lead out to expanses of wooden decks and patios designed with entertaining in mind. There’s a bar area on one side, a covered sun-lounging area, and a pool and hot tub with steps leading down to a hidden-away outdoor shower.

Then there’s that shiny 1957 Airstream trailer parked by the pool. Nicholas says the owner had it craned into position during the renovation to add to the modernist vibe of the home. Currently it’s being used for pool equipment storage, but could easily be converted into an extra bedroom, kids’ playroom or funky food truck. And yes, it’s included in the sale.

Talking of sale, the home was originally listed back in 2019 for $14 million, but with no takers, it went into the rental market, being leased for as much as $40,000 a month. Now it’s back for sale at what Nicholas calls a “more realistic” $9.5 million.

“This is a once-in-a-lifetime opportunity for someone to acquire what must be the most unique, most architecturally-significant  property for sale in Malibu right now,” he adds.