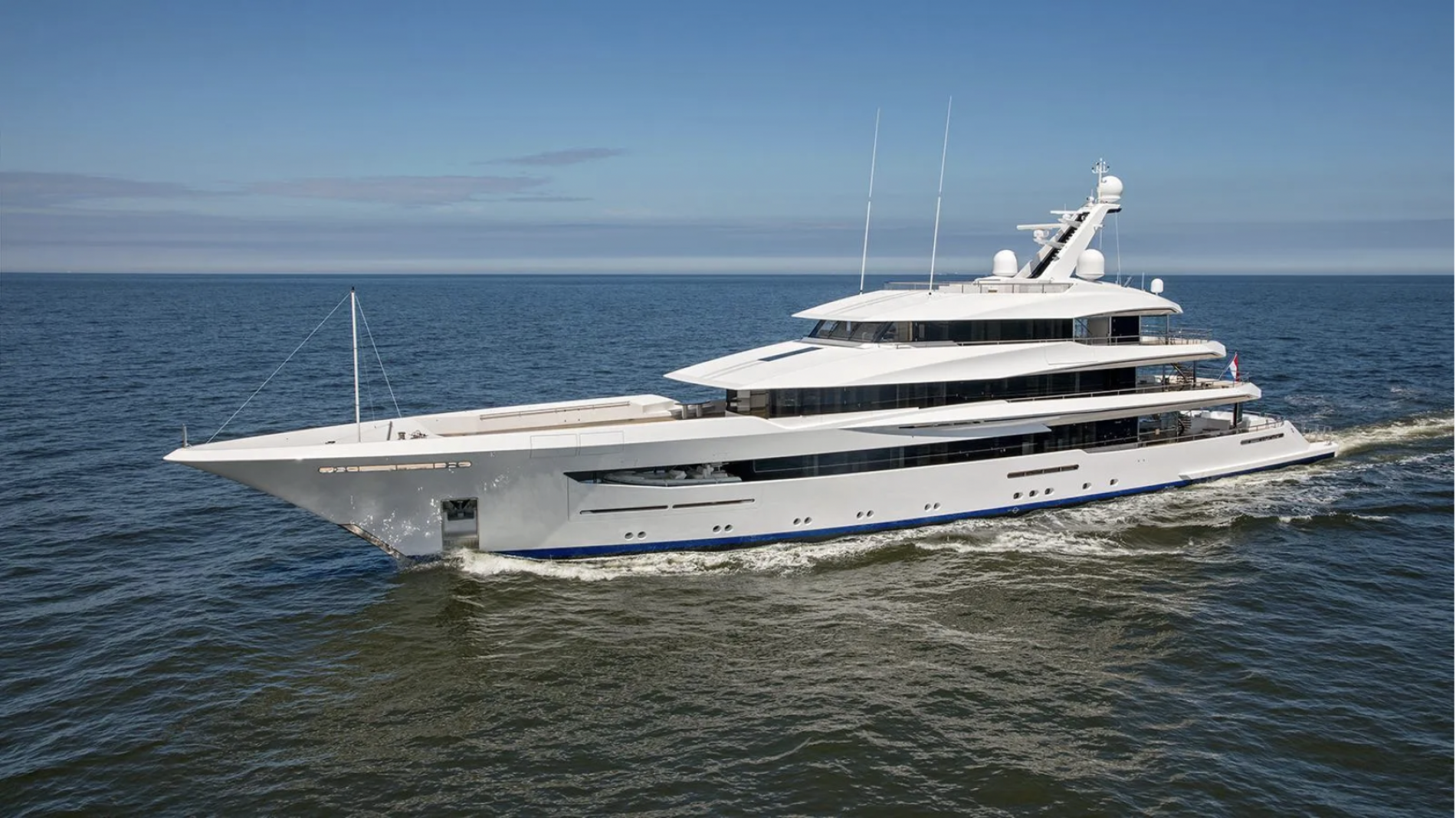 JOY: ON BOARD FEADSHIP'S 70M SUPERYACHT WITH A BASKETBALL COURT AND DISCO.

The owner's first yacht,  Joy is a 70 metre Feadship, but this is one owner for whom size is not everything.

The bigger the saloon, the less it gets used. Despite this being one of the few generally accepted rules of superyacht design, boats are still pouring out of sheds with wide-open acreage on their main and upper decks. Designers earn their money making these spaces feel as comfortable as possible, but there’s often no hiding the fact that they’re just really big rooms. And who feels comfortable putting their feet up in one of those?

Clearly not the owner of 70 metre Joy, who has pulled off something of a magic trick with this, his very first yacht: he’s made it feel cosy. “I did not want some floating villa with vast internal spaces compromising the relationship with the ocean and the interior,” he says.

“We did not need to be compromised by some preset platform or convention. We designed Joy with our own lifestyle and vision in mind.” To achieve this, volume has been turned right down. Joy carries fewer gross tonnes (around 1,100) than any other 70 metre motor yacht on the water.

Even Heesen’s low-slung and sporty Galactica Super Nova is packing a bigger interior. Benetti’s stacked 70 metre Freedom, by comparison, has almost twice the internal volume, at 1,975GT. “I wanted a yacht that was progressive and not afraid of challenging convention,” Joy’s owner adds, consigning the superyachting mantra of “more and bigger” to the dustbin.

Actually, that’s not quite true of the whole boat. By keeping the interior human-sized, the decks have been exaggerated. You can comfortably walk two abreast down Joy’s ample side decks, protected the entire time by the high bulwarks and deck overhang above.

The owner’s deck, meanwhile, should really be known as the “promenade deck”. You can stroll hand in hand around the entire superstructure, all on one level. You could even jog in tandem. Feadship claims there’s more teak on Joy than any other comparable superyacht. I can believe it — it just keeps going, ending up on the owner’s deck in a basketball and badminton court all the way forward.

Joy wasn’t always going to have such expansive outside spaces; she grew from 50 metres to 63 metres and finally to 70 metres. Simon Rowell, creative director at Bannenberg & Rowell, which designed her exterior and layout, says: “Once Joy was mapped out and engineered [at 63 metres], the owner asked us to study a longer prow, in essence for two simple reasons: he felt that a longer external foredeck visually gave more breathing space between hull and superstructure and leant the yacht an elegant stance on the water; secondly, he would benefit from a very large terrace forward of his suite, effectively extending his family deck significantly.”

It was a savvy move from the young owner, whose defiance of yachting norms extended to his choice of collaborators in the creation of his boat. Joy is the first exterior design by Bannenberg & Rowell to hit the water, while for the interior he turned to London-based Studio Indigo, which had designed boats before but never on the scale of Joy.

The company is led by Mike Fisher, who said he was asked to create an interior that was “unique and non-boat like”. He continues: “The client and his wife are young, energetic and visionary. They look to the future and rarely to the past. They hoped the design of Joy would create a real sense of contentment and comfort, without making the boat feel like every other yacht and avoiding the clichéd details that would date in years to come.”

The approach has led to an interior that’s not easy to pigeonhole, but which Fisher describes as “vintage, without being overtly fashionable”. Equally outside-the-box is Joy’s superstructure, which looks as if it was carved.

“We wanted to connect with the surroundings, to garner the best views,” says James Carley, director of exterior design at Bannenberg & Rowell. “Chamfering the edges [of the superstructure overhangs] effectively raises the external deckheads, both around the side walkways and the overhanging aft decks.” This drive to provide a generous outlook from every internal space led to some “ongoing but friendly” battles with Feadship, says Rowell, who with Carley pushed to make sills and coamings on Joy as minimal as possible, to allow the maximum possible glazing.

The best example of this is to the rear of the bridge deck, where the entire space has been given over to Joy’s glass-walled superyacht gym, kitted out with the latest Technogym equipment. It’s a hybrid space — both inside and outside — and was an important requirement for the owner, who says enthusiastically: “The gym on the bridge deck may be the best place to work out anywhere in the world!”

Carley adds that he would have removed the entire structure from this area if he could, but the exhaust casings were non-negotiable. Still, Joy’s gym is an incredibly bright and inviting space, one that is actually quite hard to walk through without an urge to better yourself — a benefit of placing a wellness area like this in an unavoidable part of a yacht, rather than squirrelling it away on a lower deck.

Double stairs forward sweep up to the superyacht sundeck and its pool, which together create an exclusive perch at the top of Joy. The gym’s blurring of what is exterior and interior extends across the main and upper decks, which both have winter gardens that can be closed off with glass to take them from outside to inside with a nod to a deckhand.

The challenge for Studio Indigo was managing this interface, to make sure there’s no jarring as you enter the yacht proper. “We used a great many finishes and textiles as well as materials and styling of furniture to make the exteriors feel like an extension of the interior spaces,” says Fisher. “Moreover, each living area has windows looking out on to the wide walkways — making the rooms feel much larger than they are.”

Then there are the carpets in Joy’s upper and main saloons that demand you walk barefoot, drawing you into the comfortable interior. The main saloon’s is silk and nettle and made by German firm Jan Kath, represented by Front Rugs. The seating in here is low and comfortable, while an Irish whiskey bar to starboard, made in the UK by Silverlining, keeps things social.

The only other saloon on Joy, on the upper deck, couldn’t feel more different. This is very deliberately a family space. “There were certain vital principles that we were determined to achieve to make the yacht work and flow with different groups and situations,” the owner says. “There are elements such as the owner’s deck, which is almost a penthouse so I can be alone with my family.” Joy’s layout reflects this, with a master suite forward and a pair of double cabins amidships for the two children the only accommodation on this level.

Studio Indigo used more than 250 finishes throughout Joy — “too many to mention!” jokes Fisher. “We gave each area its own unique and highly individual character by using diverse materials and patterns. We didn’t just want to give each cabin a theme, we wanted to make each one an experience — a memorable space full of colour and texture.”

The design for each room started with a single item, playing on the owner’s love of tactile materials. A Yastik cushion, for instance, was the initial building block for the owner’s and VIP cabins on Joy. Hand-woven ikat fabric from Indonesia and Suzani textiles from central Asia informed other areas. “These materials tell their own stories using colour, weave and pattern. The story of these cushions seemed to fit perfectly with the client’s vision and the feel of what we were all aiming to achieve,” adds the designer.

His proudest achievement on Joy is the central cantilevered superyacht staircase, which winds up from the lower deck around a lift shaft. You ascend on hand-woven carpeted pads past windows, beautiful églomisé panels made by DKT Artworks and oak marquetry.

You emerge at Joy’s bridge deck, which, apart from the gym, has an office that is treated to its own fold-down superyacht balcony, mirroring one on the starboard side. No hydraulics or electrics are used — “they have been developed to be operated manually, by simply pushing down”, says Carley.

Electrics and hydraulics are required, however, for the other openings on board Joy. Two sections of bulwark fold down pantograph-style, forward on the main deck, to release the tenders stored there. And the large transom door levers up, to create a shade for the bathing platform and to open up the superyacht beach club.

The other access to the beach club is via a set of bomb bay doors on the main deck. They reveal a cinema space, with beanbag chairs and a huge video wall made by VBH, which can be used to screen movies or play computer games. And in the teak floor — the owner’s star sign displayed in LEDs.

It’s Rowell’s favourite part of Joy. “The combination of bomb bay doors and pivoting transom door is very successful. The visual connection between decks, particularly when one considers having parents on the main deck and kids on the swim platform, really proved worthwhile. The geometry and engineering of these features is not easy, but the relatively compact lower deck beach club ‘den’ is immeasurably improved by this interaction.”

Feadship has kept everything squeak-free, as you’d expect. It’s a testament to Joy’s build quality, too, that while underway, even with all that glass and those huge overhangs — features that terrify engineers tasked with keeping a yacht quiet — there is not a rattle to be heard.

In fact, the ship is almost eerily silent when running, even when weaving figures of eight in two metre seas for the photographer in the helicopter hovering above. “She is my first Feadship,” says the captain after the shoot. “I have been impressed with the overall build standard and attention to detail. Joy is very stable and quiet as a mouse underway.”

To stay out of the images, everyone on board is asked to hide away in Joy’s main saloon. I sink into the sofa scattered with Holland & Sherry cushions to wait it out, as the skipper swings us left and right. It’s only a few seconds before I’m forcing down the urge to put my feet up on the custom coffee table. But the fact that I want to — feel irresistibly compelled to — tells you everything you need to know about Joy.