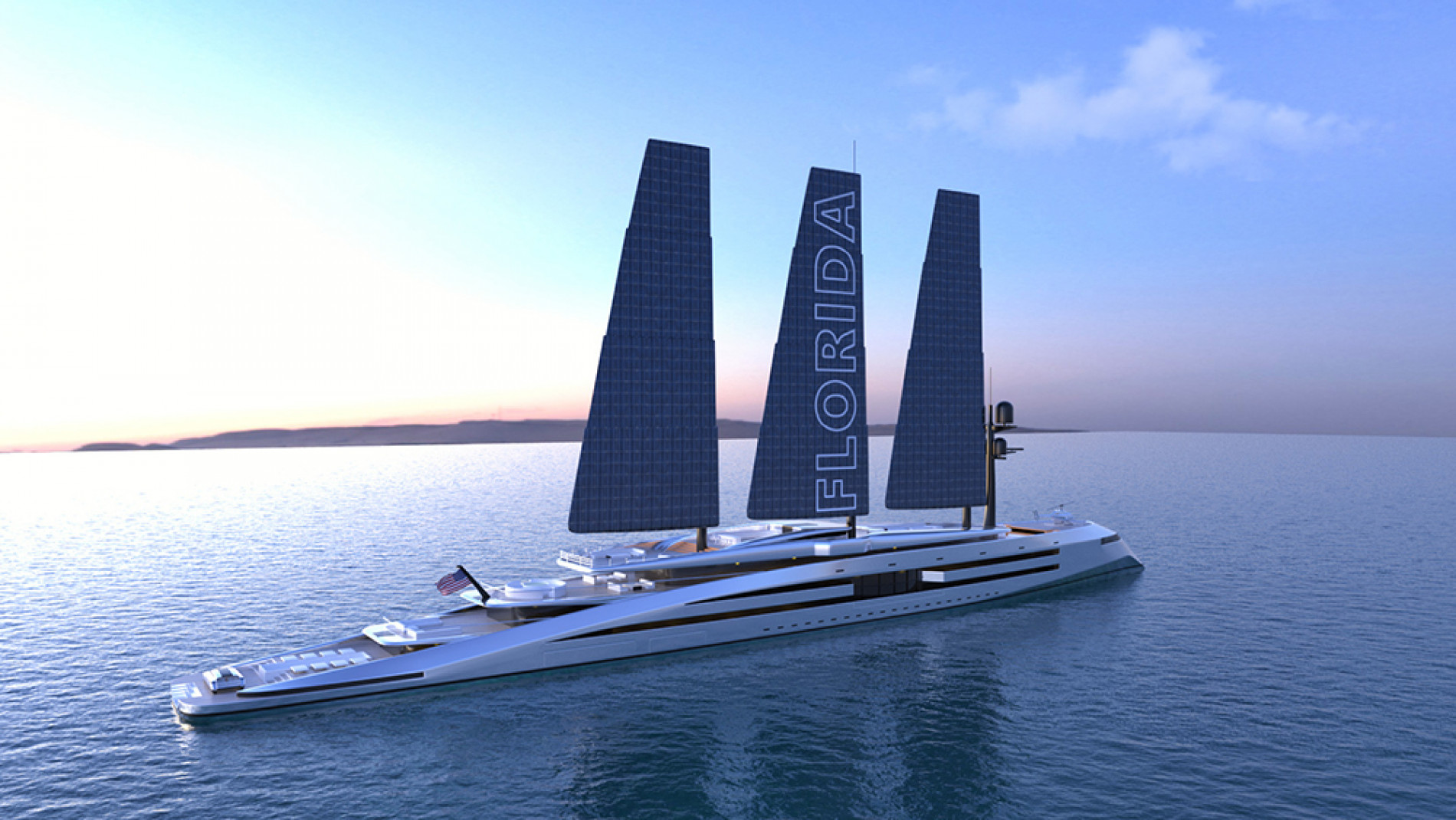 Norwegian superyacht designer Kurt Strand just can’t seem to get enough of The Sunshine State. Shortly after penning a menacing 436-footer known as Miami, he’s unveiled a stunning sailing superyacht concept called Florida.
The futuristic 525-footer is equipped with “space-age technology” that will allow her to sail off the coast of the southeasternmost US state and beyond without releasing harmful emissions. That’s largely due to the vessel’s ingenious sails.

Florida is equipped with three carbon-fiber wing masts that each support a sizable 262-foot retractable sail. A cut above the typical canvas variety, these sails are covered with cutting-edge solar panels that automatically position themselves to capture the sun’s rays. This means when there’s no wind, Florida can switch into “solar sail” mode and run on sunshine.

Conversely, when the gusts are aplenty, the vessel sails along normally while the solar panels continue to capture clean energy that is then stored in a battery bank onboard. To ensure the sun-absorbing panels are always perfectly glossy, the vessel also features a built-in system that washes and polishes the sails each time they retract.
On the off chance that there’s no wind or sunshine, Strand says the superyacht can also run on a hydrogen fuel cell system. The vessel is fitted with hydro generators that produce power while the yacht is under sail. Again, this energy is stored in the battery bank and can be used to create hydrogen onboard the yacht. (There’s also a backup generator in case all that new tech fails.)

Aside from propulsion, Florida features a spacious layout and endless high-end amenities. Fittingly, the vessel’s interior was inspired by the Florida Keys and features a color palette of pastels that are synonymous with Miami. Sticking with the eco-friendly theme, the floors and furnishings are made from recycled materials and vegan leather.

At the center of the vessel is a circular two-story lobby and bar where one can enjoy an Old Cuban cocktail. Elsewhere, there are 12 luxury suites that can sleep a total of 24 guests, plus cabins for 40 crew. Seafarers will also have access to a fitness center, cinema and spa.

Outside, meanwhile, there is a helipad on the foredeck, a large swimming pool aft, a beach club and a supercar garage. There’s also a huge selection of toys, including a 40-foot electric Beach Cruiser, an amphibious limousine tender that can actually drive up onto the beach, plus Jet Skis and off-roaders because why not?