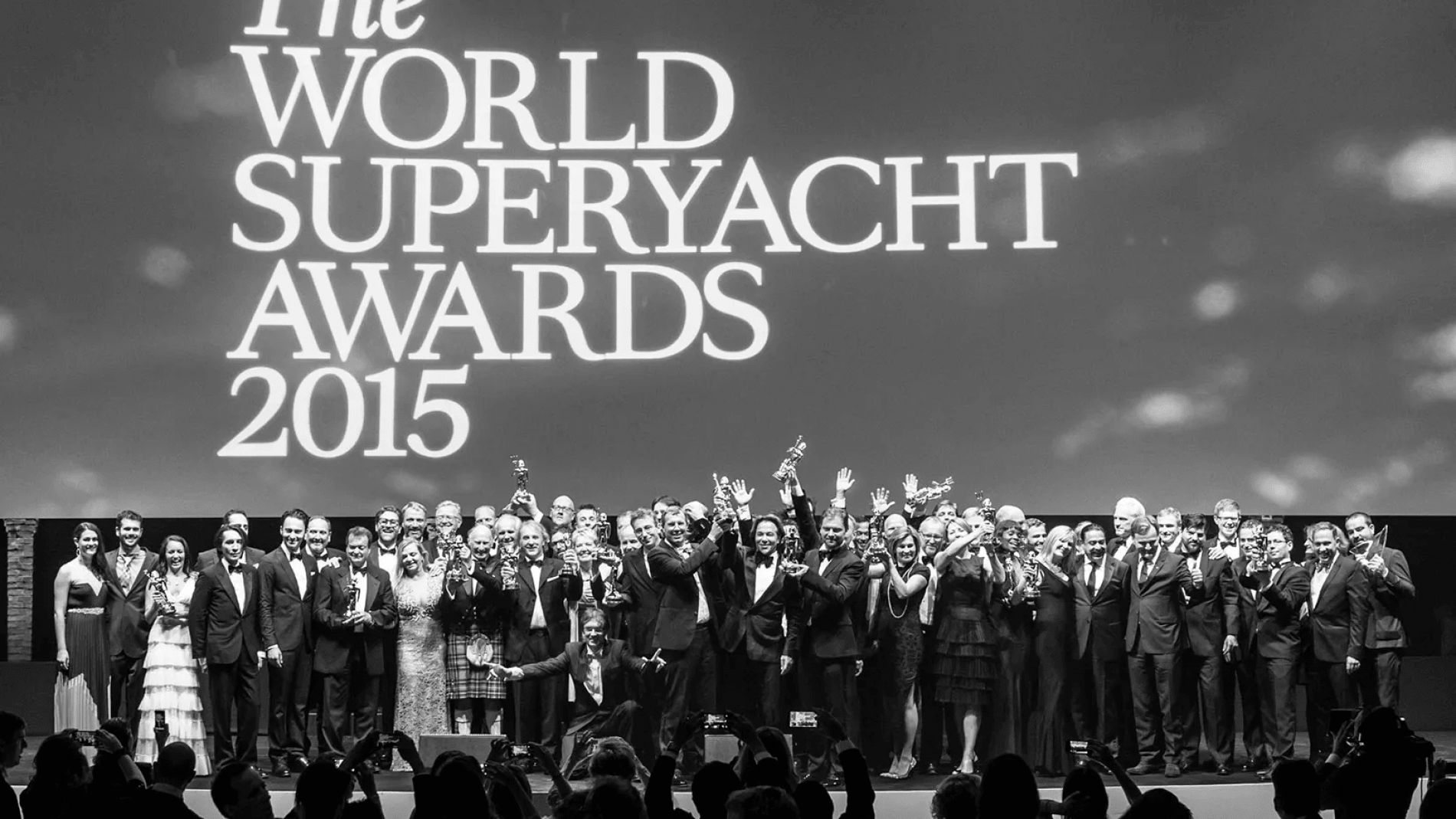 WORLD SUPERYACHT AWARDS: THE INSIDE STORY OF THE YACHTING INDUSTRY'S OSCARS

What if there was a superyacht awards programme where superyacht owners themselves judged the latest and greatest projects to hit the water? When the idea was posed more than 17 years ago, it was a novel one.

Yachting awards at the time were mostly judged by the organisations or publications arranging them – and not much has changed since. But BOAT International Media envisioned a peer-reviewed process, by putting the decision-making in the hands of experienced yacht owners. With that guiding philosophy, the World Superyacht Awards were created in 2005.

“We wanted to have a judging system that was completely transparent and judged by the end user of the boat,” says Roger Lean-Vercoe, who helped create the WSAs and was a longtime Chairman of the Judges. “We sought out owners who had built yachts and understood the process.”

The first WSA prize-giving was held in Venice, Italy in 2006, but organising the awards started early in 2005 by writing the rules and recruiting judges, which Lean-Vercoe admits was tough in the beginning. “We didn’t get enough owners, so we topped up the panel with a few unbiased industry professionals, like the owner of Merrill Stevens shipyard,” he says. However, the buzz of the awards soon attracted enthusiastic owners, and after a few years the judging panel was entirely made up of superyacht owners.

Nowadays, an average of 20 owners make up the judging panel each year, and all but a few exceptions are current superyacht owners. The Chairman of the Judges – a position rotated between the judges – heads the Judges’ Meeting, the vital day when the awards scoring takes place. It’s a key part of an entire awards weekend, which has an accompanying social programme. In recent years, the judging has taken place in London, Trieste and Abu Dhabi.

As judges serve a minimum of three years and average a six-year term on the panel, there is a huge amount of experience to tap in to. “If they are an effective judge, they can stay as long as they like,” Lean-Vercoe says. Anyone who signs on as a WSA judge has to be truly passionate about the undertaking. Judges agree to visit at least five of the nominated yachts – and attend the judging weekend.

“We try to get judges onto as many boats as possible so there is always someone at the Judges’ Meeting who has physically experienced the boat we are talking about,” says Lean-Vercoe. While most of the yachts are seen at the major boat shows, such as Monaco and Fort Lauderdale, some owners go to great lengths to see nominated yachts. When Lord Laidlaw was a judge, he diverted his private jet to the Maldives just to see a boat.

Getting on board the yachts is not always a straightforward process, according to Paola Trifiró owner of 33 metre Vitters sailing yacht Ribelle, who has been a judge since 2012. But more commonly yacht owners and yards will make sure the judges get the full experience. “One of my favourite memories of visiting a yacht was test sailing Bill Duker’s 70 metre Sybaris (now Badis) in Monaco in 2016,” Trifiró recalls. She also lists going on board Adastra, Madame Gu and Dilbar as some of her most memorable judging experiences.

“We all do this with a lot of investment of time, passion and dedication,” says Thomas Haffa, who has been a judge since his former yacht 4H won a WSA in 2008 and has owned six yachts during his tenure. “I’m often asked how much the awards are influenced by the amount of advertising spend from shipyards with BOAT International, but the judging process is completely independent. It is a very professional group of objective people.”

Very passionate people, too, according to Alan Dabbiere, who has been a judge since 2009. “I love boats – I love the engineering, the way they move in the water, the fact they are more than a mode of transportation, but a lifestyle,” he says. “Even though I lived on my past two boats (a 35 metre Benetti and 60 metre CRNConstance) for long periods, seeing other points of view has broadened my ideas about what makes a great build.”

The desire to see and experience the latest yachts to hit the water is a huge part of the attraction for the judges, allowing them to access yachts that would otherwise be off-limits. “I enjoy judging because the task allows me to enlarge my knowledge of innovations in yachting,” says Trifiró.

As the only awards programme in the yachting industry judged by owners, the WSAs have earned an unmatched level of credibility and gravitas. “Because it’s given by real owners who have been committed to designing and building boats, and who are experienced in judging value and quality of the boats, it increases the value of the Awards,” says designer Philippe Briand, whose boats have won many of the coveted Neptune trophies over the years.

Briand says that an uptick in business can be traced back directly to the awards – even beyond the superyacht industry. After receiving an award for 73 metre Grace E (now Nautilus), Briand was hired for a building project in Hong Kong.

“Winning gives exposure and brand awareness,” says Farouk Nefzi, chief marketing officer of Feadship. “The WSAs can absolutely raise awareness to the greater audience outside of our industry as well.”

Dutch yard Heesen, one of the most successful yards in WSA history, says that winning a WSA is certainly something clients pay attention to. “Brokers have asked us for the list of most recent Awards won by our boats because it was requested by a client,” says Sara Gianola, PR and press office manager at Heesen. “It definitely has value.”

From the beginning, says Lean-Vercoe, the WSA ceremony hit the mark as a high-end event where yards were happy to take their clients. Over the years, the ceremonies have been held in Venice, London, Istanbul, Amsterdam and Florence.

“The aim was always to have the prize-giving not in a hotel ballroom, but to find a venue where having a dinner there was a privilege in itself,” says Lean-Vercoe. “Florence was the epitome of that – to have a cocktail in the Uffizi Gallery and a dinner in the Medici Hall is significant and different. And, of course, the awards itself is not just the prize giving – it’s always an entire weekend of exciting things to do.” The venues have grown along with the awards ceremony. The edition in Venice, attended by around 400 guests, was quickly outgrown; more than 600 guests attended the 2018 edition in Florence.

Trifiró fondly remembers when the awards was held in Istanbul, and also enjoyed Florence, “where guests enjoyed conversing in front of Botticelli's Primavera, and tasted the magnificent dinner in the splendid frame of the Salone dei Cinquecento”.

In 2020, things were a little different. With COVID-19 causing disruption to global travel and events, the World Superyacht Awards were hosted virtually for the first time. Key winners of the evening included the 77.3 metre Feadship superyacht Pi, which won two awards, including the coveted Motor Yacht of the Year award. Elsewhere, the Baltic sailing yacht Canova was named Sailing Yacht of the Year while Hodor triumphed in the support vessel category. The virtual ceremony included video messages from Prince Albert II of Monaco and Sir Ben Ainslie, who updated viewers on the progress of the UK’s America’s Cup team INEOS Team UK.

By 2021, a sense of normality had returned as did an in-person award ceremony. The most recent edition of the World Superyacht Awards was held in Europe's yachting capital of Monaco with 80 metre Artefact taking home the award for Motor Yacht of the Year and 33.9 metre Geist winning Sailing Yacht of the Year.

Nefzi calls the WSAs the “best organised award ceremony in this industry – there’s a good balance between entertainment, social and programming”.

Since its inception, the WSA has only been tweaked slightly, says Lean-Vercoe. Gone are the days of judges receiving photocopied dossiers and CD-ROMS as now everything can go onto a 8GB memory stick. The biggest change, instead, has been to the yachts themselves. “The WSA haven’t changed much, but every year we visit more innovative boats,” says Trifiró.

Haffa agrees, and says that “as the industry has developed and yachts have gotten bigger, it has made them more complex to judge”. This has only motivated the judges, who have been known to engage in passionate debate during the Judges’ Meeting. During the day-long meeting, the judges examine every nominated boat before submitting their score via a secret ballot. “This is a group that has strong opinions about what makes a great boat,” says Dabbiere. “It creates a really lively discussion.”

Though scoring takes place during the judging weekend, the results are obviously sealed until the big black-tie Gala Evening. This anticipation makes it an exciting night for all involved. “It’s a super exciting moment where you feel the knot in your stomach and the chills on your back – then there’s a moment when they announce the winner when everyone holds their breath in the room,” says Heesen’s Gianola.

But perhaps it’s Briand who best sums up what it means to win a World Superyacht Award: “It is like being inducted into the yachting hall of fame.”