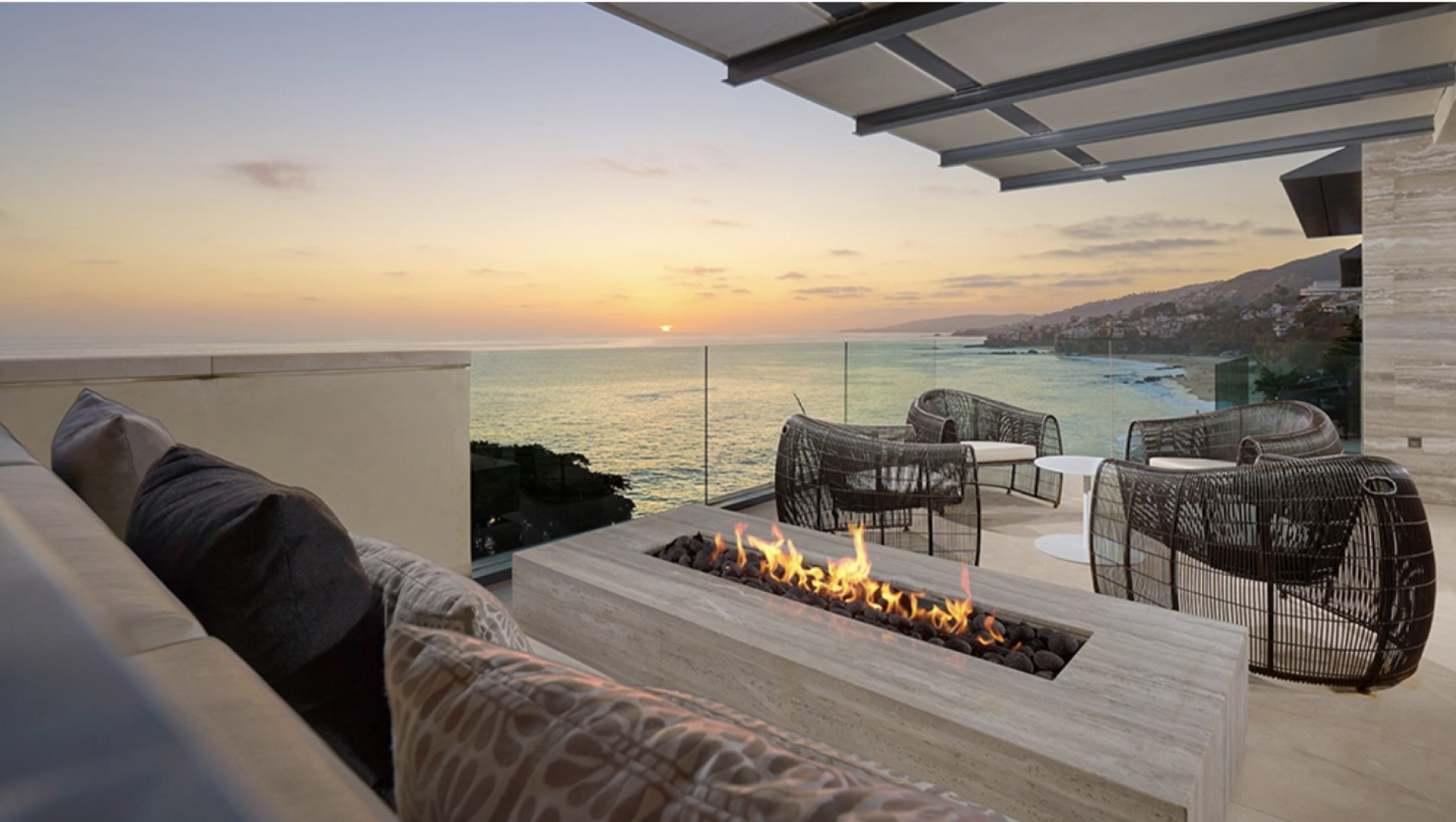 HOME OF THE WEEK: THIS $30 MILLION OCEANFRONT LAGUNA BEACH COMPOUND WAS CUSTOM-MADE FOR SUPERCAR COLLECTORS.

It has twin garages, a car turntable and even a driveway engineered to not cause damage.

When building his ultramodern cliff-edge compound just south of California’s laid-back Laguna Beach, Ferrari lover Mark Hammond faced a dilemma: design a garage that would fit the challenging landscape, or park his prized toys somewhere else.

Naturally, the tech entrepreneur (he founded the Retail Equation, a company that helps retailers track fraud in their return processes) chose the former. He created twin subterranean garages at the bottom of a steep driveway, big enough for six cars plus some of his treasured vintage motorcycles.

To spin them around for easy exiting—backing-up any supercar is not for the faint of heart—Hammond specified a showroom-style turntable, and even built an inspection pit for mechanical check-ups.

As for the nightmare of piloting his ground-scraping Italian stallions down the super-steep driveway without grazing pricey bodywork, he came up with an ingenious solution: He got carpenters to build a rough, wooden replica of a Ferrari and rolled it down the driveway over and over until he got the slope just right.

The car-friendly amenities are just some of the remarkable features of this 6,000-square-foot, glass-filled property, which is part of the super-exclusive Three Arch Bay enclave, roughly five miles south of Laguna Beach and 58 miles from downtown Los Angeles.

What goes a long way in justifying that $29.95 million asking is the home’s coveted position overlooking the crashing Pacific, which results in some of the most breathtaking vistas in Southern California. From the west-facing top-floor deck you can watch golden sunsets or gaze out to Santa Catalina Island, while the north view stretches all along the coastline to Long Beach.

For up-close views of the water, take the private staircase down to the property’s own private beach and splash in the ocean or one of the tide pools that fill with every tidal change.

“There are only a handful of truly priceless oceanfront sites in Southern California, and this is one of them,” says listing agent John Cain of Pacific Sotheby’s International Realty.

Records show that back in 2005, Hammond paid $9.5 million for the coveted third-of-an-acre lot containing a barely-standing 1932 home. He then proceeded to spend eight years, and a small fortune, creating this contemporary masterpiece.

The design was the result of a joint effort from three of Orange County’s leading building visionaries; Horst Architects, CJ Light and Associates and Aria Design. Together they faced near insurmountable problems, like being required by California’s Coastal Commission to use 50 per cent of the original home’s rickety wood framing and having to create complex new foundations that involved sinking 20 reinforced concrete caissons into the steep hillside.

Completed in 2014, the ultra-modern home makes the most of its jaw-dropping views through walls of bevel-edged glass, huge glass pocket doors, glass-balconied terraces and an airy, open-plan layout.

Security gates off North La Senda Drive open on to that steep driveway and lead down into the home’s entry. The main living area is designed for indoor/outdoor living, with the pitched-roof kitchen featuring sleek Boffi cabinetry and Calcutta marble. It opens out onto the oversized covered terrace with gas firepit and spacious living area. The kitchen also spills out into the back of the house, leading to outside dining and covered lounging areas and access to a 50-foot lap pool and separate guest studio.

Take the open glass staircase (or the elevator) down to the lower level and the spectacular primary suite with its incredible ocean views and huge stroll-around closet. There are two other bedrooms down here, as well. This level is also home to Hammond’s beloved “man cave”, with its wine bar and 378-bottle display, poker room and big-screen movie theater. Here, at the touch of a button, curtains on a side wall part to reveal a glass picture window into the garage.

While the Laguna Beach market for super-luxury properties has been on fire for years, the home has been languishing on the market since 2019, when it was first listed for $35 million. Despite price cuts, first to $31.9 million and now to $29.95 million, it is still looking for a buyer.

Part of the problem could be right next door, where a just-completed 5,000-square-foot, five-bedroom, triple-story home on a soaring promontory overlooking sandy Thousand Steps Cove just listed for $10 million less, at $19.99 million. So for true supercar lovers, Hammond’s subterranean garage and other car-focused features just might be the deciding factors.