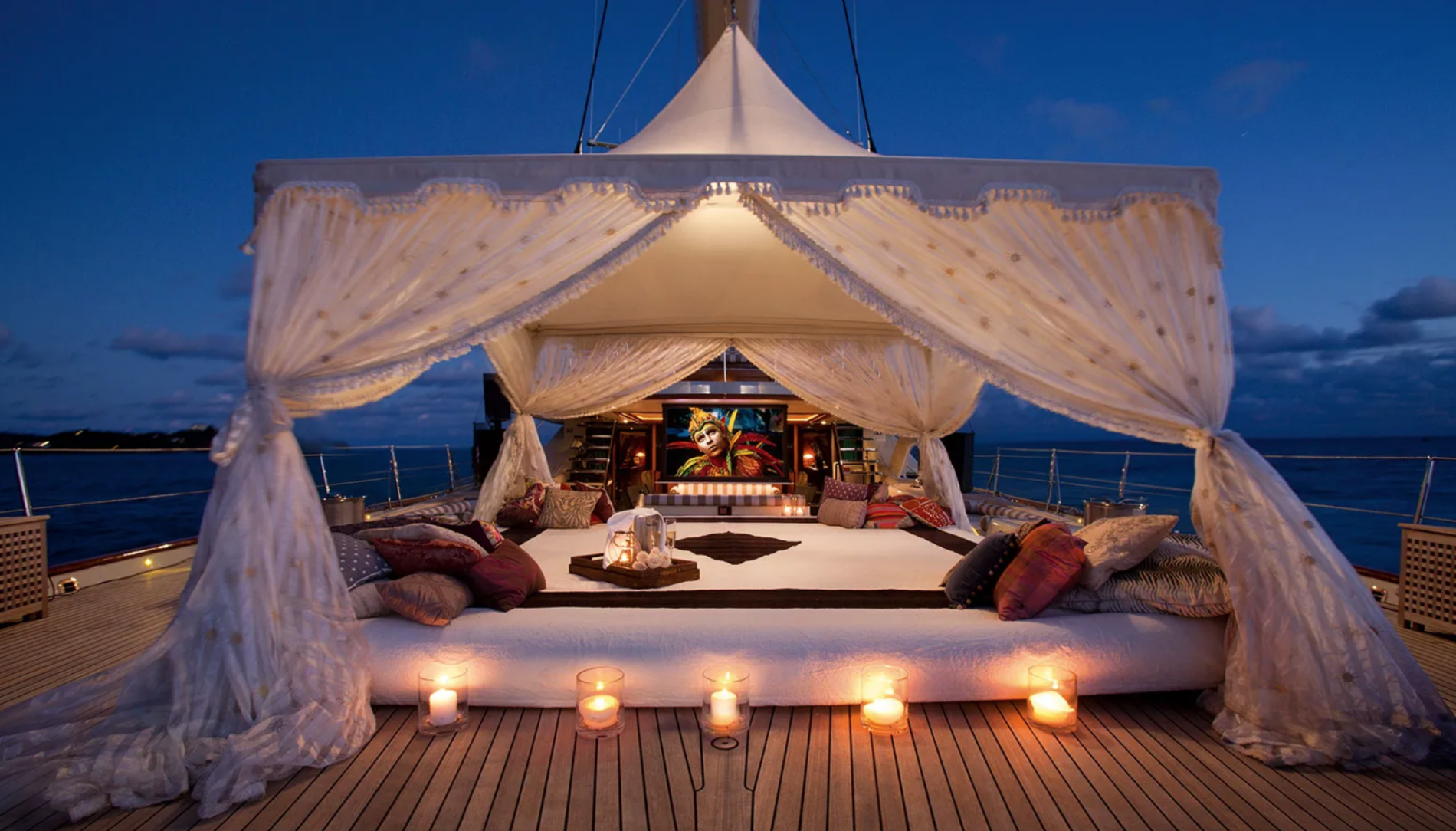 HOW TO CREATE THE ULTIMATE SUPERYACHT CINEMA EXPERIENCE

With innovative new tech and ever-larger yachts, the potential to create your own next-generation cinema on the sea is now a reality. Steve May applauds the premiere.

"'Wow!’ That’s the common reaction.” Elliot Dixon, from specialist marine integrator Smart, is describing the response to the IMAX cinema on board 93-metre Feadship Lady S, the first IMAX Private Theatre ever to be installed on a superyacht. With its six-metre-wide curved screen and commercial-grade sound system, the theatre sets a new high bar in marine entertainment.

Of course, Lady S isn’t the only superyacht to boast a jaw-dropping entertainment system. New technologies are allowing designers, architects and specialist integrators to create a wide range of entertainment spaces previously unseen on yachts.

CAT (California Audio Technology) Marine, a specialist in high-end marine sound systems, confirms that demand for top-end cinemas is booming. “Especially for yachts above 70 metres,” says Alistair Levine, CAT’s director of sales and marketing. “First-run day-and-date [simultaneous theatrical and domestic release] movie content is more available than ever, and outdoor systems, where you can watch a film under the stars in a remote destination, is an experience only a superyacht can provide.”

Screens are brighter and sharper than ever before and audio systems more immersive, but it’s not just better audiovisual technology that’s driving the trend. Superyachts are also getting bigger, creating more opportunities for indulgence. And as yachts grow larger, owners tend to want to spend more time at sea, perhaps doing longer passages.

According to Maurizio Minossi, CTO of AV/IT system integration company Videoworks, more areas than ever are being turned over to a premium movie experience, but there are specific challenges facing marine integrators. “In residential projects, often a part of the house is selected as a cinema. In yachts, especially those shorter than 80 metres, the area in which cinemas are placed is usually a multifunctional area, so it must be more flexible and configurable. For instance, in a running 70-metre project, we had to design the audiovisual for a sundeck that was configurable as an outdoor cinema, live stage and disco area.”

And there are other peculiar differences, usually associated with projection. “Ceiling heights make cinemas in superyachts more difficult to design,” he says. “If a cinema is located in the lower decks, the proximity to the engine room involves advanced noise control and audio handling.”

Most of us will be familiar with IMAX. A leader in premium- format cinema systems, the name is often used as shorthand to describe a gigantic screen experience. So how did the team from Smart, who worked on the Lady S installation, pull it off?

“It was a phenomenal project,” says Dixon. “While there has been an IMAX theatre installed on a cruise ship [Carnival Vista], this is the first time an IMAX-accredited Private Theatre has been installed on a superyacht. It features the ability to have content sent directly from the movie studios, usually only available to those on the ‘Bel Air Circuit’.” (This is a reference to an exclusive movie distribution service provided by Hollywood studios, offered only to a select group of movie executives and actors.)

IMAX Private Theatres are made to stringent standards on land-based installations, but additional modifications had to be made in order to make it work on a yacht. Tom Richardson, one of Smart’s senior technology consultants, redesigned the initial theatre concept, changing the specification in order to meet the owner’s exact requirements. With support from IMAX, as well as the acoustic specialists from Sonics ESD and key members at Burgess Technical Services, he was able to refine the specification. The work now forms the basis for all future marine-based IMAX theatres.

The cinema has seven reclining seats in two rows, along with a large sofa on the front row that seats five. The 2:1 ratio screen, meanwhile, spans more than one deck. “The role of Michael Leach Design should be recognised here,” says Dixon. “They worked closely with IMAX to ensure the necessary space allocation was incorporated into the structure of the vessel during the design phase of the superyacht build. This was critical and contributed towards ensuring all the parameters set by the owner could be met, enabling this theatre to be installed.”

What sets the Lady S IMAX Private Theatre apart from other high-end yacht cinemas is that in addition to playing Blu-ray discs and content from a server, it will also play cinema-grade 4K DCPs (digital cinema packages), the same files used in commercial theatres.

The theatre’s sound system is also compliant with 3D cinema sound format Dolby Atmos. Given that IMAX’s key rival in the premium theatre space is Dolby, some sensitive discussions took place between the two camps in order for the theatre to be certified to play both Dolby Atmos and IMAX content. There are 17 speakers and seven subwoofers installed in the room, driven by more than 11 kW of audio power. Formidable, whatever way you listen to it.

So what can we expect from tomorrow’s yacht theatres? Is there transformational new tech waiting in the wings? One intriguing development is microLED. This new display innovation is causing designers to rethink what’s possible from a display. Samsung is leading the way here with a product called The Wall.

Imagine a screen made from self-illuminating blocks that plug together to create a seamless display. This display can be any size and any aspect ratio – you just build your (microLED) wall to fit the space. What’s more, these building blocks are relatively light. Speaking at BOAT International's Superyacht Design Festival in 2020, NY-based Bonetti/Kozerski Architecture declared, “Physical space can influence lifestyle. We’re not designing for the way clients live now; we’re designing for the way they’re going to live.”

The Wall embodies this sense of freedom. It can then be used to display a large video window, a high-resolution photo gallery or a news, time and weather ticker – or all three at once. The Wall effectively becomes a canvas that can display a multiplicity of video feeds and information streams simultaneously.

Few things are more beguiling than watching a movie, Moët in hand, on the open deck. But ambient light and the environment can often spoil the fun. Perhaps unsurprisingly, Lady S boasts an innovative outdoor cinema solution, a 201-inch folding LCD television on the aft deck, supplied by C’SEED. “Outdoor cinema is something that’s often requested, and I can totally understand why,” says Smart’s Elliot Dixon. “If you’re on your yacht in a fantastic setting, why sit in a darkened room?”

Actually, there are two good reasons: light and weather. The amount of energy required to generate an image in bright daylight is fantastically high. A darkened theatre runs around 100 nits [a unit of brightness], which looks bright in a light-controlled space, but is impossible to view in direct sunlight. The 201-inch C’SEED is capable of 4,000 nits full brightness (running at 100 per cent). “At dusk and night, the screen runs at just six per cent brightness and it appears quite bright,” we’re told. The second issue is wind. A projection screen is often a sheet of fabric, and even in the slightest of winds this can start to flap. “If you are looking for an outdoor cinema, it has to be LED and not a projection-based solution,” advises Dixon.

This feature is taken from the January 2021 issue of BOAT International. Get this magazine sent straight to your door, or subscribe and never miss an issue.