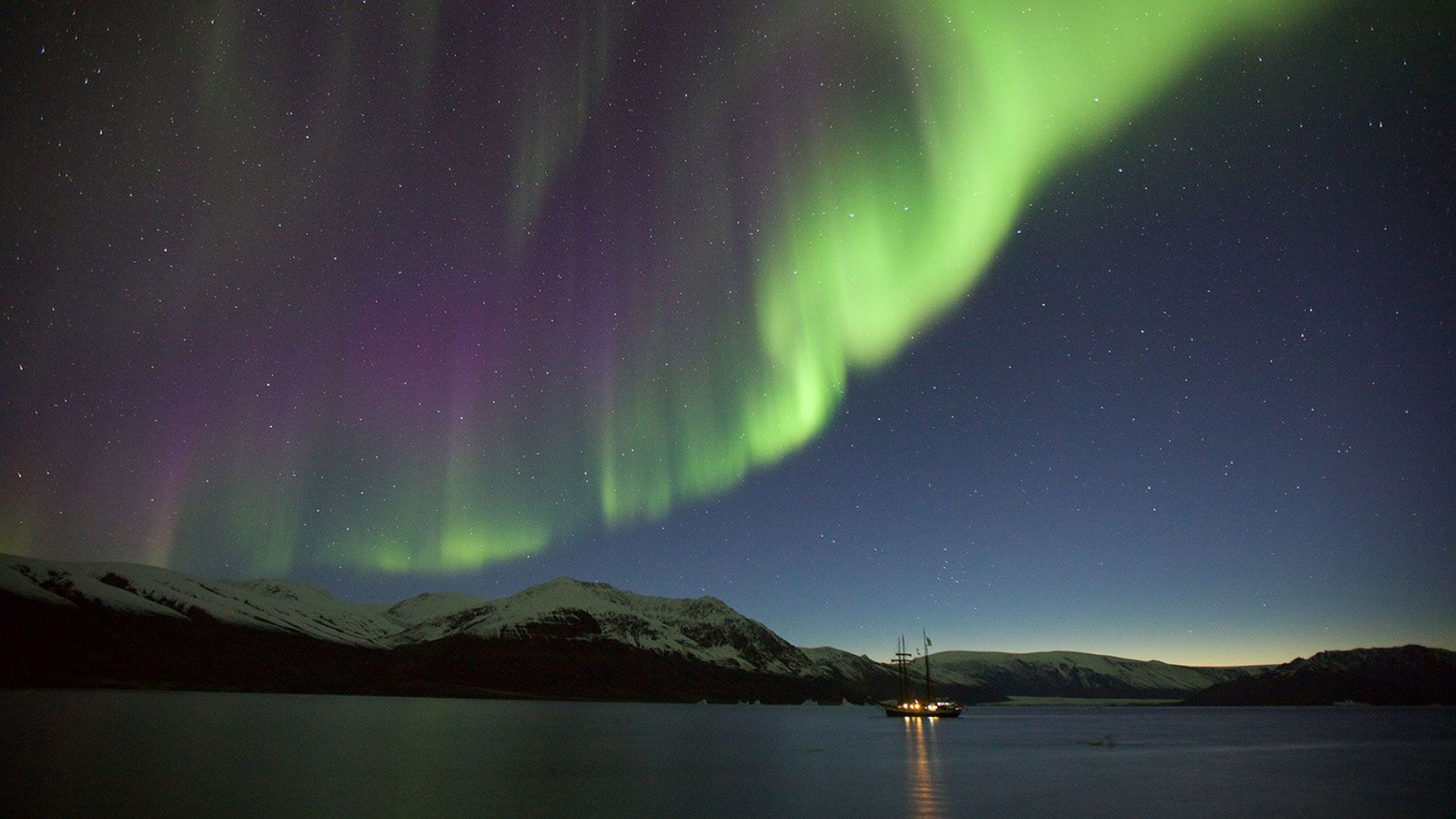 HOW TO SEE THE NORTHERN LIGHTS BY SUPERYACHT

The Northern Lights are one of the most fleeting, ethereal, and powerful natural phenomena that you can find on earth – but did you know that one of the best ways to see the aurora borealis is by boat?
A well-kept secret by those in the know, a yacht offers a wealth of advantages for stargazers searching for the aurora: the flexibility to travel to clearer skies with minimal light pollution, high-tech kit for monitoring the weather, privacy and the ability to escape the crowds inland – not to mention superior accommodation and service. We break down everything you need to know to do this bucket list trip the right way, as well as highlighting the best destinations in the world for Northern Lights stargazing…

It’s all in the timing
You’re likely to see the Northern Lights from September through to April, but plan when you travel wisely to avoid bad weather. January-March is a safe bet for Norway, for example, and bear in mind that the further north you go, the better chance you have of seeing them.
“I’ve been to Alaska in the end of July and managed to (faintly) see the Northern Lights,” says Ben Lyons of EYOS Expeditions, “but that’s exceptionally rare. You have to decide whether seeing the Lights is the main focus of your trip, or whether it would just be a nice plus. For instance, going to Alaska in early September significantly increases your chances of seeing vivid Northern Lights, but for some owners, the rest of what there is to see and do in Alaska may be more appealing in July. What is the your priority?”
Founder of luxury travel company Blue Marble Private, Elizabeth Ellis, says, “Whilst most superyachts will need to be mindful of avoiding the depths of winter in Europe and North America, there is a missed opportunity with September and October being two excellent months to travel to more off the beaten track parts of Europe once the summer crowds have disappeared.” Blue Marble Private can help arrange trips to Northern Norway and Svalbard to hunt for the Northern Lights from mid-September.

Escape the clouds
If you’re following the coastline, then you’ll find more cloud cover than inland, but there are numerous ways around this. The first is to “chase the Lights”, by asking your captain to head for areas of clear sky, and by being flexible with your route and trip. “It’s about boxing clever," explains Geordie Mackay-Lewis of Pelorus, “you know where these arctic storms are going to be, and where they’re going to go, and because you’re not grounded to a particular lodge or a hotel, you can absolutely relocate.”
The second is to make use of on-board helicopters to head into clearer patches of sky, while using your yacht as your base. Lastly, there’s no shame in heading inland for a night or so, to camp out somewhere really remote before heading back on board – in fact, many find a hybrid trip like this particularly rewarding, combining a wilderness adventure with true luxury back on board.

Do your homework
While you can’t, of course, do anything about when and how the elusive Lights appear, it’s a good idea to take some experts with you if you’re investing heavily in the trip.
“I would advise taking a naturalist,” explains Tamsin Vaughan of Yachting Partners International, “someone who knows about weather and light in the area that you’re travelling to, and someone local who has a good idea of the lay of the land.”
In fact, with the right team and equipment behind you, even trickier destinations where poor weather would normally be problematic for superyachts, can become a possibility – from Alaska and Yukon through to Svalbard, the Faroe Islands and even Scotland. What’s more, there are thrilling new ways to see the Lights on the horizon, including tandem power motoring underneath the Lights in the sky – following in the footsteps of Red Bull pilot Horacio Llorens, who paraglided beneath the Lights back in 2016.
With so many ways to do this exceptional trip, interest from superyacht owners is already picking up. So gather your captain, crew and guests, and block out some dates in the diary. Just don’t tell the others...

The best destinations for Northern Lights cruises
The Northern Lights can be spotted all the way from Sweden to Scotland, but which Aurora hotspot in the High Arctic is best for exploring with a superyacht cruise?

Svalbard, Norway
Snow-covered Svalbard lies halfway between Norway and the North Pole, in prime position for sightings of the aurora borealis. Svalbard is renowned for its natural beauty and plentiful wildlife – local residents include polar bears, narwhals and reindeer, so there’s plenty to see even if you miss the light show.
Northern Norway is one of the more undiscovered destinations for chasing the Northern Lights. “There are some beautiful spots here in winter and people don’t normally visit at this time of year”, says Nick Davies of Cookson Adventures. “You can scuba dive with the orcas here in January too – that would make a great trip.”

Grótta, Iceland
The outcrop of Grótta is home to a quaint lighthouse and not much else. This means there’s minimal light pollution on the island, making it ideal for catching the Northern Lights. Leave your yacht in Reykjavík and tender or drive 10 minutes west, then watch the aurora as you warm your feet in a natural hot spring.

Anchorage, Alaska
Dark winters in Anchorage create a higher chance of witnessing an aurora borealis display. Embrace the long nights in Alaska’s largest city, which serves as a gateway to the US state’s Arctic glaciers and national parks.

Sisimiut, Greenland
Greenland is a particularly good spot to see the Northern Lights, and came out top of the list for almost every expert we spoke to. Why? Because your chance of seeing the Lights here is pretty good, and because it’s a magnificent destination to travel to regardless.
“You really get that sense of the Arctic in Greenland,” says Lyons. “It’s a proper adventure destination and you’ll see some of the largest, most incredible icebergs in the world.” Mackay-Lewis agrees. “In places like Sweden or Finland, you might not see much activity at all,” he says, “but in that bit of ocean between Greenland and Eastern Canada, you really are right in the thick of it.”
In Greenland the season runs from September through to April explains Vaughan. “Plus you’ll find dreamlike conditions for heli-skiing, if nothing else.”
Sailors undertaking the Northwest Passage should stop at Sisimiut. This remote hub – where fishing, hiking and dog sledding are the favoured activities – is located in the wilderness of western Greenland, 20 nauitcal miles north of the Arctic Circle. The ice-capped peaks that encircle the town make for excellent Northern Lights viewing points.

Luleå Archipelago, Sweden
Despite their natural beauty, the Luleå islands are largely uninhabited. The resulting lack of light pollution (and phone reception) makes the archipelago ideal for getting off the grid and spying the Northern Lights. Expect to pass seaside cottages and sleepy fishing towns as you navigate through the Gulf of Bothnia’s Arctic waters.