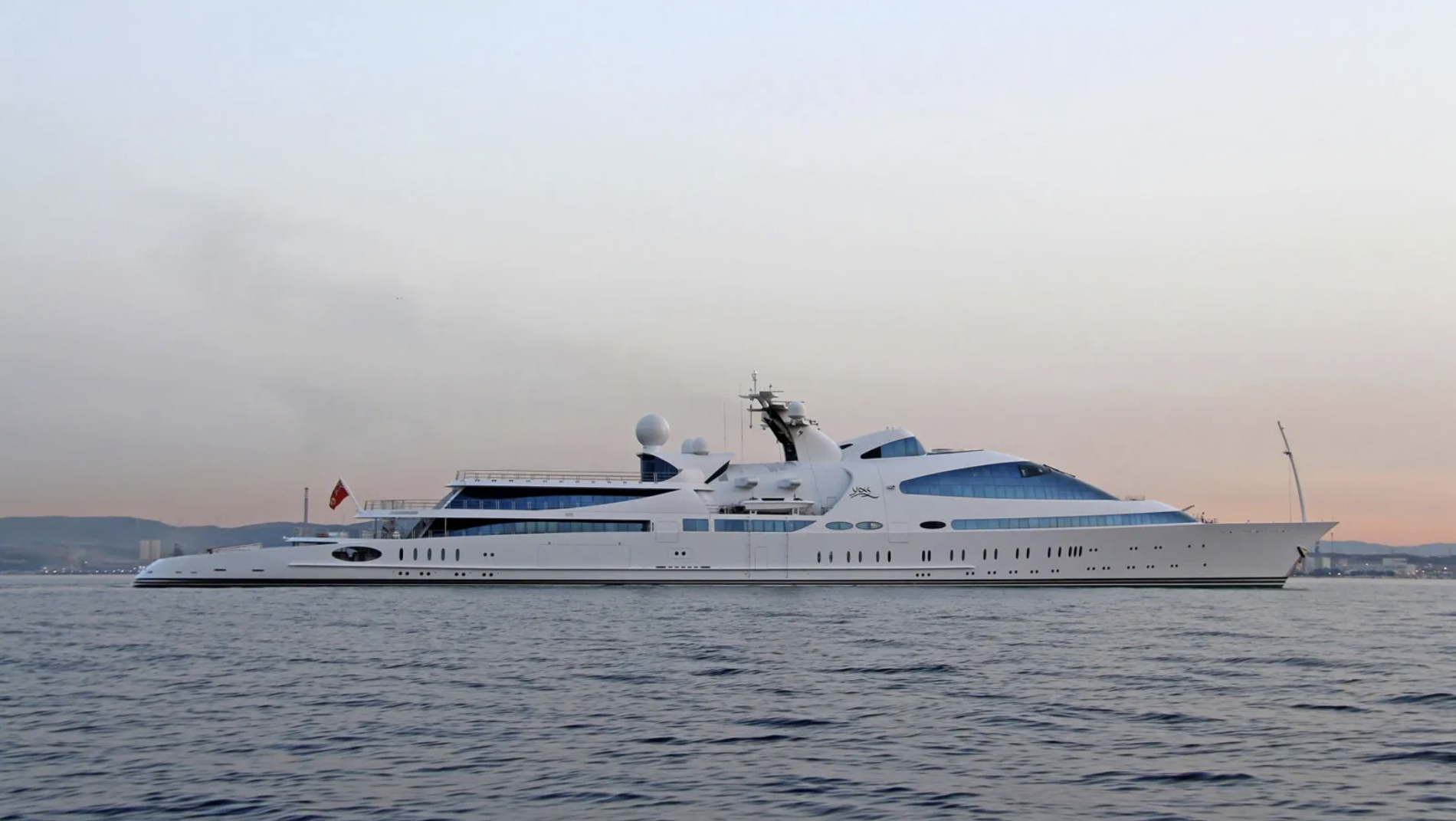 ICONIC YACHTS: HOW THE NAVY FRIGATE YAS WAS TRANSFORMED INTO A DOLPHIN-INSPIRED SUPERYACHT.

“This concept is a little bit different than the others,” says designer Jacques Pierrejean on his studio’s Youtube channel about the iconic yacht Yas. Take one look at the 141-metre motor yacht, and you know this is an understatement to say the least. Many a yacht claims to be entirely unique, but few truly are. The iconic yacht Yas is one of the rare exceptions – with her slim frigate hull, dolphin-inspired exterior and massive panes of glass on her forward superstructure, it’s safe to say there isn’t another yacht like her out there.

Known as Project Swift during her refit, the yachting community waited in anticipation to see the final product emerge. Though the hull was launched in 2011, her completion and interior outfitting took four years, and it wasn’t until 2015 that Yas was delivered and spotted cruising in the Mediterranean. Greenline Yacht Interiors worked on the fit-out of the yacht’s expansive interior spaces.

Yas took a circuitous route to become the iconic yacht that she is today. The bones of the yacht were military in nature. Launched in 1977, she was originally a 135-metre Dutch-built navy frigate named HNLMS Piet Hein. Built by Koninklijke Schelde shipyard in The Netherlands, she served the Royal Dutch Navy for more than 20 years. After that, she changed hands a number of times before ending up in the UAE, serving its military from 1998 to 2006.

When the military was done with her, the vessel was acquired by an owner who wanted to turn her into a private vessel, with all of the work carried out in the UAE. Jacques Pierrejean was hired to make this a reality, with the rebuild taking place at ADM Shipyards in the UAE. As is the story with many refits, the scope of the work was initially much smaller and the timeline much shorter. But it was soon discovered that the majority of the hull would have to be rebuilt. This gave the opportunity for the look of the yacht to be entirely reimagined.

Pierrejean’s design philosophy centres around being inspired by nature, so he proposed the porpoise-like shape and huge swaths of forward glass that make Yasstand out from the rest of the superyacht fleet. “We wanted to go with a frigate shaped hull and have the feeling of a dolphin,” says Pierrejean.

Frigates are warships that are built for speed and easy manoeuvring, and they are often typified narrow hulls that improve efficiency and performance. It was these aspects that drew the eventual private owner of Yas to the former navy ship. “The hull is like a sailing boat, it’s like a knife,” says Pierrejean. This slim hull helps contribute to Yas’shigh performance – she cruises at 25 knots and can reach a top speed of 30 knots, powered by twin Rolls-Royce gas turbine engines.

The need for a more extensive rebuild also provided a chance to extend the length of the hull. The designer proposed extending the aft section by about 12 metres. This extension added to the fluidity of the exterior lines and provided space for an aft pool area, which has a waterfall flowing into it. Other amenities on board Yas include a spa tub and helicopter deck.

But the noticeable aspect of this yacht has to be her unusual forward superstructure made entirely of glass. This giant glass dome houses the bridge as well as the owner’s suite. This allows the interior spaces to truly feel open to the sea, says the designer. “Changing the exterior changed the interior,” Pierrejean says. Beyond her unusual looks, Yas also stands out with her sizable accommodations for up to 60 guests.

Yas’s iconic looks are sure to help this extraordinary vessel stand apart from the pack for years to come. “[Yas is] our most important project,” says Pierrejean. “We are very proud to be able to do such a project and thank the owner of the boat for trusting in us.”