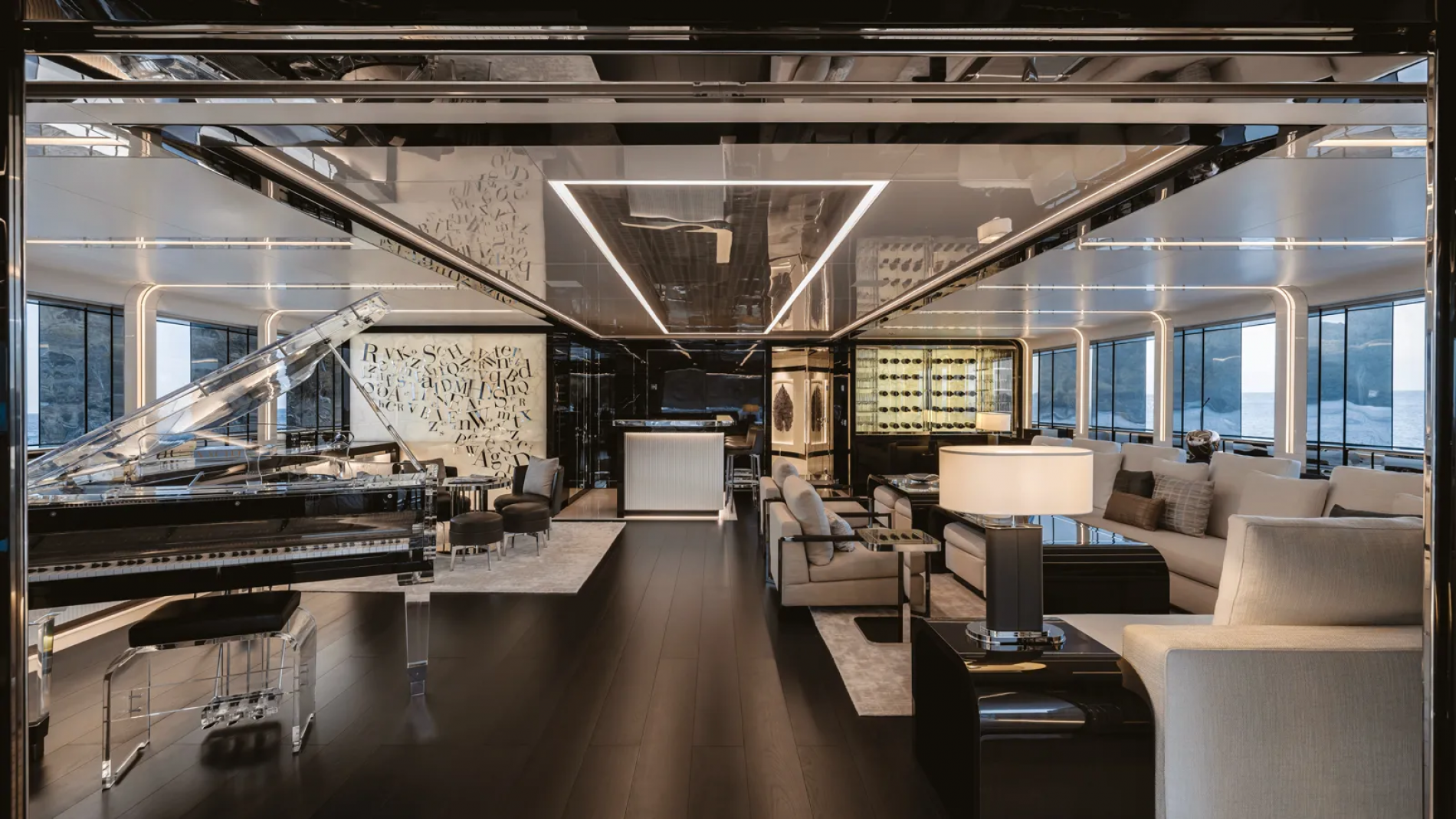 Not only is Resilience the biggest yacht launched by ISA Yachts since the Palumbo Group acquired the shipyard in 2016, but, by several measures, she’s also the most exciting – six decks, 1,400GT, styling by Team for Design (Enrico Gobbi) with luxurious modern interiors by the Italian studio’s co-director of interiors, Carlo Lionetti, and a range in excess of 5,000 nautical miles. In addition, Palumbo’s technical team created a capable world cruiser – although immediate plans are to keep her in the Mediterranean and the Caribbean for private use and charter.

This ambitious project was several years in the making.

Following a pleasant lunch that led to a working relationship, Goldsworthy convinced him that there were better options available at a similar price. Eventually, the owner bought a 50-meter, an Italian build named Dream, which he renamed Resilience.

He enjoyed her for five years before selling her on, but three years into his first yacht ownership he told his broker that he would like to build his own custom yacht in the future. “We started talking about what that yacht might look like, and he came to the Monaco Yacht Show that year and the next,” Goldsworthy says. “We would look around yachts and collect ideas for our potential new build.” The owner kept a detailed scrapbook of inspiration and concepts.

They also spoke to various shipyards, assessing the good, the bad, and the less desirable fit. Then, after several meetings across Europe, they selected ISA Yachts to build what would assuredly be a challenging project. The owner and his team liked the fact that Palumbo was heavily investing in the brand, but more importantly, Goldsworthy says, they liked the passion and commitment they showed for their vision. “They really wanted to make a statement by building something high quality and custom, and an owner who would help them get there.”

To ensure the results would meet their high expectations, they bolstered the build team with Robert Bennett (of RVB Marine) as technical manager, who Goldsworthy says was instrumental in reaching their highest standards.

Although he’s been involved in larger projects, Gianpaolo Lapenna, Palumbo’s general manager for engineering and production, says Resilience was the most challenging project he’s been a part of to date. “We had to take the owner’s ideas, many of which had come from 100-meter-plus yachts, and incorporate them into the design of a 65-meter while maintaining style and keeping it looking attractive.”

The first draft took 11 months, as the team was determined to get everything ironed out before moving forward with the build. “The owner gave Enrico [Gobbi]  a lot of specific feedback on everything, from the flare of the bow to the mast design,” Goldsworthy says. “I added practical points relating to the GA and the flow, for service etc. So the design evolved through 10 or 15 iterations to what you see now.”

What we see is an elegant yacht with all the desirable features owners want and charter guests enjoy, including a vast beach club. That’s Gobbi’s favorite area, and it was also one of the most challenging to execute. The yacht’s four-meter by four-meter transom door opens flush with the swim platform, as do two side doors, to create an inside-outside space of more than 180 square meters.

“The aft door was complicated due to the very long platform. Everything on this yacht was custom; not even the passerelle was standard,” Lapenna says. The latter was designed to be hidden from guests’ view using a complex articulated mechanism and to preserve the exceptional height in the beach club, over  2.1 meters. But it was all worth it.

“The area becomes almost a floating platform open to the sea. It’s one of the most emotional and stylistic points of the yacht, offering a unique position in close contact with the sea,” says Gobbi. “It has a casual and elegant style; the walls are covered in teak and I like the contrast between the teak and navy blue.”

The owners chose the beach club’s colors as a nod to the original Resilience’s blue scheme, beautifully complemented by a frosted Murano glass panel that decorates the front of a bar, elaborate lighting, and natural materials. The area includes a lounge with an elegant sofa from the Hamptons Collection by Roberti Rattan, showers, a gym, a sauna, and a massage room. Light glimmers down from the clear ceiling – the bottom of the swimming pool on the deck above.

There’s plenty of access to the beach club area, with an external staircase running down from the aft deck above, an internal staircase by the massage room and, most impressively, a glass corridor running straight through the heart of the yacht – the engine room – which leads to four luxurious guest cabins.

These are connected to the upper deck by a jellyfish sculpture in a spiral staircase made by Preciosa. “The owner wanted something unique here,” Gobbi says. “A large artwork, something colourful and related to the sea.” So Gobbi and his team designed this elaborate sculpture made up of several hand-blown glass elements. The shipyard moved past its initial reluctance to install such a monumental glass piece and worked out how to execute its flawless installation. The final result is stunning, especially at night when the illuminated amber and orange colours come to life.

On the main deck towards the front of the vessel, the impressive owner’s cabin stretches the full 12-metre beam, and includes drop-down terraces on either side to take advantage of all conditions – or as his-and-hers perhaps. The central bed is crowned by another Gobbi-designed custom-made crystal and chrome chandelier by Preciosa, complementing the modern, refined feel of the space. The furniture is veneered with Palissandro marble and boasts onyx tops for an extra luxurious feel. On the bedside tables is more beautiful free-blown glass, in the form of the Heathfield & Co Esme table lamps, whose unique bubble detailing adds another contemporary pop.

The large main saloon and dining room, complete with the 12-seater table and a Freeman sofa by Minotti, are also on this deck. The doors surrounding the saloon open out on all sides, enabling natural flow into the outdoor swimming area. That connection inside and out was a part of the owner’s brief for a charter-friendly yacht with excellent flow. A partition, which can be pulled between the dining and lounge areas, affords even more flexibility. The six-meter pool, equipped with a counter-current, is flanked with seating for spectators and sun-worshippers alike.

The bridge is what gets Captain Andrew Beattie most excited. He was able to give his input on the design and layout of the wheelhouse and radio room. “Using templates, I positioned all the equipment where I felt best, and we also removed some items which weren’t necessary,” he says. “I really like the wing stations, so we can see down the yacht’s sides when maneuvering, even with the terraces out.”

In front of the wheelhouse is a carefully positioned and sheltered crew rest area. During passages, the off-duty crew can enjoy the ride and take breaks away from their cabin, or the crew mess with zero interference from guests. “The owner wanted to create a nice space for the crew; he understands and wants to look after his people. Our crew retention is great and it benefits all of us,” says Captain Beattie, whose cabin is behind the bridge.

Also on the bridge deck is a sixth guest cabin with its own private terrace, which confers it the status of a true VIP. The devil is clearly in the design details once again here, right down to the striking Porta Romana Salperton lamps.  A terrace is also located off the owner’s private office. Flooded with light, the office has a clean and modern feel, making it the perfect space to take phone calls or hold a private meeting.

Further aft, the upper deck lounge is full of sofas for lounging and movie watching, and a bar area with a self-playing translucent Edelweiss grand piano. The bar itself is another interesting design feature with backlit onyx and a stunning lighting scheme. Outdoors, a custom-made table and chairs by Monegasque brand Vaar, featuring more polished steel and mahogany, seats 12. More large sofas and sunbeds complement this area and there’s a hidden flat screen for an incredible outdoor cinema experience. The owner insisted that the table needed to be virtually windless when underway, as it had been on the original Resilience because that’s where he enjoys reading his morning papers. To achieve this result, Goldsworthy says, “the shipyard did a Computational Fluid Dynamics flow analysis of what the wind would do underway at all points of sail so they could guarantee this as much as possible. For me, this really highlights what you can achieve when you go custom.”

Above is the sundeck, one of the most versatile areas on board. Thanks to an articulated system of doors, this area can be totally open or enclosed to benefit from the air-con system on sticky midsummer days. Up front, there’s a private mosaic-tiled spa pool flanked by sofas, and to the rear, a barbecue area with a circular fire pit as a focal point. This was custom-made with cracked glass and polished stainless steel by Dolce Far Niente and gives the space a laid-back vibe that’s perfect for sundowners.

One final deck offers the observatory area. Private sunbathing, a coffee table, and a modern armchair by Paola Lenti allow for the peaceful enjoyment of the full panoramic view.

The crew area on the lower deck has room for up to 15. The crew mess is a lovely open-plan design created with the crew’s input. “Chef Gilles de Cambourg, my wife, Laura [chief stew], and I, were able to sit down and look at the design of this area closely,” says the captain. “It was originally two rooms, but we decided it would work better if we took the dividing wall down and opened it up into one bigger space.”

And the same goes with the stainless steel galley. De Cambourg had a significant influence on its design. “We actually moved the door during the build,” Beattie says. “As the project progressed, we discovered new changes that would make our lives as crew easier and help us do our jobs more efficiently. Fortunately, the ISA team were all very receptive and accommodating to our requests and we worked well together as a team.”

The crew area on the lower deck has room for up to 15. The crew mess is a lovely open-plan design created with the crew’s input. “Chef Gilles de Cambourg, my wife, Laura [chief stew], and I, were able to sit down and look at the design of this area closely,” says the captain. “It was originally two rooms, but we decided it would work better if we took the dividing wall down and opened it up into one bigger space.”

And the same goes with the stainless steel galley. De Cambourg had a significant influence on its design. “We actually moved the door during the build,” Beattie says. “As the project progressed, we discovered new changes that would make our lives as crew easier and help us do our jobs more efficiently. Fortunately, the ISA team were all very receptive and accommodating to our requests and we worked well together as a team.”

Lapenna proudly says: “If you put in a lot of effort and a lot of passion, you can make the impossible possible. We pushed our limits, and it was worth it.”