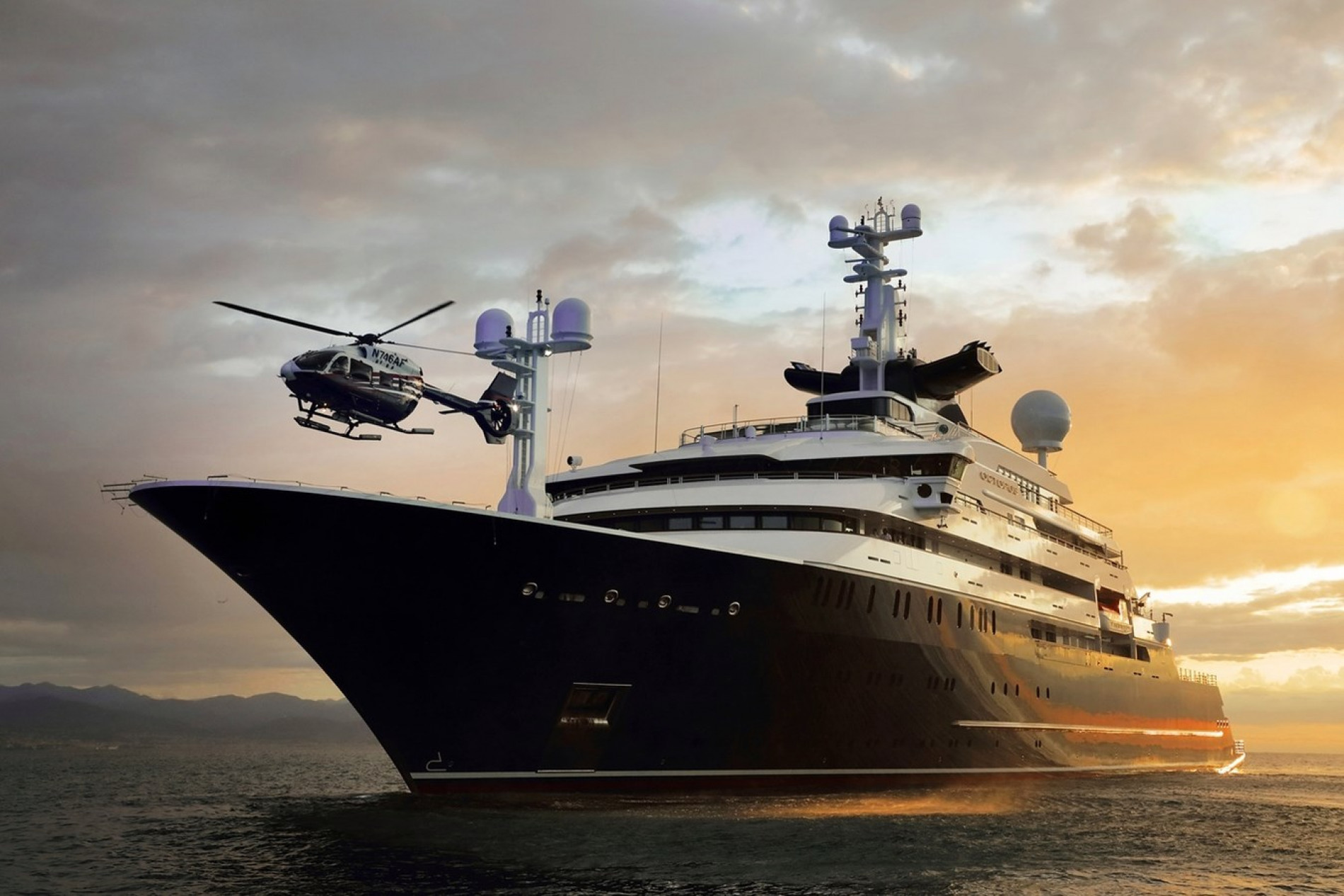 Shipbuilders and the designers they collaborate with work tirelessly to develop yachts tailored to meet the competing demands of size, beauty, convenience and technological efficacy made by their clients. To ring in the new decade, we take a look at the 10 largest superyachts currently on the market in 2020. Their magnitude in length and volume, as well as the many amenities and activities they offer for leisure, work or even marine exploration make them cherished floating homes for both their would-be owners and the guests they hope to entertain.

Widely known as the late Paul Allen’s sleek and versatile explorer yacht, Octopus is by far the largest yacht for sale in 2020 at 126.2 metres in length. Designed by Espen Øino International and built by German shipyard Lürssen, Octopus was developed to meet Finnish-Swedish Ice-Class 1A standards striking a rare balance between luxury and Nordic adventurism. Octopus also features two helipads at her aft and foredeck and an 18-metre submarine garaged and deployable at her stern. Her 9,932 GT interior was designed by Jonathan Quinn Barnett Ltd., and offers 13 staterooms capable of accommodating up to 26 guests with amenities such as a helicopter garage fit for two, cinema, recording studio, pool, dive room, underwater observation lounge, gym, spa and sauna.

Surreptitiously known as Project Mistral during development, the 106.5-metre superyacht Amadea was first unveiled to the world by Lürssen in 2016. Her exterior, most prominently exemplified by the silver eagle figurehead at its bow and globular superstructure at its fore, was the remarkable work of Espen Øino International. Amadea’s Passenger Yacht Code (PYC) compliant interior has a volume of 4,402 GT and was configured by Zuretti Interior Design to accommodate up to 16 guests in eight staterooms, one of which affords the owner of the Amadea a personal jacuzzi and study. This is complemented by a spa, bar and gym elsewhere on the owner’s deck. She also features a 10-metre swimming pool, wheelhouse saloon and movie theatre, Moroccan spa, 12-metre helipad, two large tenders, several jet skis, a jetpack and a large range of toys.

Built to Loyd’s Register classification and launched in 1990 as the most expensive yacht in the world by shipbuilders Blohm & Voss, the 104.85-metre Lady Moura is now listed as a yacht for sale by the same owner that built her 30 years ago. She offers a 2,600 square-metre interior customised to afford her owner an entire deck suited to family occupancy and activities, as well as six other decks capable of accommodating up to 26 guests and 60 crew. Both Lady Moura’s palatial exterior and interior are the work of yacht architect Luigi Sturchio, typified by the superyacht’s 24-carat gold coated nameplate, and marble-finished suites. At 6,539 GT, she provides her owner with a helipad, movie theatre, disco room, gym, bakery, spa, pool with a retractable roof, sauna, as well as several tenders, toys and a landing craft.

The distinguished duo of Lürssen and Espen Øino International strikes again with their 2014 collaboration Kismet:  the latter once more being responsible for developing her exterior. This design comes to an ovular curve on either side of Kismet’s large foredeck, and finally meets the protracted tip overlooking her bow, providing her with an almost swordfish-like appearance. At 95.2 metres in length and 2,928 GT in volume, two different helipads occupy her fore and bridge deck, while her top deck features an observation platform that also doubles as an open deck pool and Jacuzzi. Having hosted the likes of Jay-Z and Beyoncé, Kismet enjoys an experienced history of luxury charters. Those who’ve seen her from the inside will note the Gatsby-esque air of her interior, which Reymond Langton Design sought to devise with a 'Champagne & Caviar' leitmotif in mind.

The 3,120 GT Lürssen yacht, Madsummer, was created by Harrison Eidsgaard and interior designer Laura Sessa for an owner who isn’t afraid to stand out from the crowd. Sessa's style for the yacht incorporates a chic colour scheme of blues, whites and reds with contemporary textures that is homely and personal – a design influenced by the long-standing relationship between the designer and the owner. Madsummer boasts a fuel-efficient IMO-compliant system of twin MTU 16V4000M63 engines that help to give her a range of up to 6,000 nautical miles at 12 knots and a top speed of 18 knots.

Another superyacht to join the market straight out of the charter world is Aquarius: a 92-metre Feadship delivered by the Dutch shipbuilder in 2016. Her all-white four-deck exterior is the work of Sinot Yacht Architecture & Design, and De Voogt Naval Architects were responsible for her naval engineering. She is a thoroughly Dutch yacht from the inside out, with Sinot Yacht Architecture & Design also crafting her interior. This draws heavily on soft but bright and contrasting colour-tones like navy blue and cream, often referred to as 'Dutch white'.  With an overall volume of 2,856 GT, she features an open swimming pool on her main deck’s aft side, an entire deck devoted to the owner, six VIP cabins fitted to accommodate up to 12 guests, a three-metre Jacuzzi, spa, gym and a generous selection of toys.

Since her delivery in 2014 as the first-ever yacht to be built to PYC standards and 'Yacht of the Year Over 82m' according to the World Superyacht Awards, Tranquility has performed as a charter vessel having most recently served as the setting for Kylie Jenner’s 22nd birthday. Her silken-tone exterior stretches 91.5 metres in length and was designed by the yacht’s builder Oceanco in order to comply with Ice-Class E standards. In addition to the master suite, Tranquility is also capable of accommodating 18 guests in nine staterooms. Winch Design equipped Tranquility with an interior fit for the superyacht’s title, featuring a predominantly calm and natural theme that varies in colour and composition from room to room. She offers a gym, spa, sauna, plunge pool, elevator, massage room, Jacuzzi, two 10.5-metre Hodgdon tenders, four kayaks, three jet skis, as well as several other water toys throughout her volume of 2,998 GT.

Illusion Plus is the most recent of SYT's largest yachts for sale to come out of production; having been delivered by Chinese shipbuilder Pride Mega Yachts in 2018. Like Tranquility, the 88.5-metre Illusion Plus was the collaborative effort of Azure Naval Architects and two other designers, reportedly beginning as early as 2010. Her flush superstructure is almost seamlessly integrated into the yacht’s distinctive displacement hull and foredeck helipad, but despite her compact look, Rainsford Saunders Design furnished her with a six-deck exterior and 3,642 GT of volume. Sinot Yacht Architecture & Design capitalised on her copious interior capacity by providing Illusion Plus with a lower-deck garage capable of housing three tenders, a four-deck elevator, cinema-capable lounge, gym, spa, and two Jacuzzis.

The 87-metre superyacht ACE has remained with her original owner since being delivered in 2012 by Lürssen. ACE’s arching equilateral quadrilateral exterior features a helipad at its foredeck, which, like her interior, was penned by Winch Design. At 2,732 GT, ACE is capable of quartering 12 guests in six staterooms and keeping them occupied with a designated cinema room, beach club, open deck Jacuzzi, spa, gym, tender and toys complete with their own hull garage docking port.

The 86-metre superyacht Chakra is the oldest superyacht listed of this list, having been delivered by the Deest-based shipbuilder Scheepswerf Gebr. van der Werf in 1963 and converted into a superyacht by Devonport from 1997 to 1998. Chakra’s exterior is primarily characterised by the five-deck stack comprising her hull and superstructure, which is typical of vintage yachts in Chakra’s era. In 2016 and 2017, Chakra underwent extensive refits that saw her 2,083 GT interior maintain its distinctly modern layout and design. Given her ample deck space, Chakra has accordingly been employed for charters and is capable of accommodating up to 42 guests in 21 different staterooms. She also offers a massage room, gym, beauty parlour, open deck Jacuzzi, a top-deck sunning area and tender garage, as well as a panoply of toys and scuba gear.